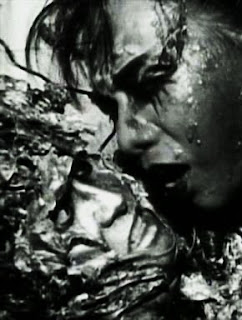 It’s that time of the month again to head over to Paracinema.net and check out the latest instalment of Audiodrome. This month my ears have been getting rather bloody, indulging in the onslaught of Chu Ishikawa’s cacophonous industrial soundtrack for Tetsuo: The Iron Man and its equally brutal follow up, Body Hammer.

Shinya Tsukamoto’s searingly visceral film is the graphic tale of a lowly salary man’s descent into a metal-encased nightmare, as his body suddenly begins to turn into scrap metal. Tetsuo combines Cronenbergian body horror with Lynchian existentialism and filters it all through a gritty, William Gibson-esque cyberpunk aesthetic. Ishikawa’s ferocious soundtrack perfectly enhances the disturbing imagery, frantic editing and dystopian vision of the films.

While you’re over at Paracinema’s online lair, why not pick up the latest issue? It’s really rather good and all the articles address the theme of revenge in genre cinema…
Audiodrome Chu Ishikawa Film soundtrack industrial music Paracinema Magazine Score Tetsuo

Wes said…
Excellent article James. I've been a huge fan of Industrial Music since I was a moody morose teenager in the early 90's, so Tetsuo has always been a treat for the ears as well as the eyes. I wonder had Shinya Tsukamoto seen Sogo Ishii's 1986 film Halber Mensch, a record of German Industrialists Einstürzende Neubauten's trip to Japan. Ishi recorded the band playing in a disused factory using an arsenal of industrial objects and equipment - sheets of metal, pipes, drills, jackhammers, grinders etc. The almost fetishized shots of these found instruments strongly recalls Tetsuo...
24 April 2012 at 09:10

James Gracey said…
Cheers Wes. That film of the industrial bands recorded in a disused factory sounds awesome! I'm sure the vast space and echoic acoustics really add to the atmosphere. I'm not too up on industrial music, but have quite liked the stuff I have heard courtesy of muso-friends. Interesting also that the film is peppered with fetishized shots of bizarre instruments made from pipes and grinders and the like - that sounds like Tetsuo alright!
24 April 2012 at 10:24

Wes said…
It's a fascinating film alrite - when you listen to, say The Eagles you can imagine a guy playing a guitar, a guy on drums etc, but Einstürzende Neubauten's sound is a little more abstract, and one is never quite sure when listening to their music how the sounds are being generated, so in that sense the film is a valuable document. Check out the opening 5 mins here.

It's a shame Industrial Music hasn't been used more in Cinema, considering the music has a natural cinematic sweep. Be sure to check out Coil's Unreleased Themes for Hellraiser. Clive Barker commissioned Coil to write music forHellraiser but the soundtrack was rejected for a more traditional score. It's hard to imagine Hellraiser without the Christopher Young score, but fascinating to think what kind of a complexion Coil's eerie music would have on Hellraiser had New World gone with Coil...
24 April 2012 at 11:36

James Gracey said…
Thanks very much for the linkage, Wes - will check it out ASAP. Yes, I remember hearing that Coil had composed a score for Hellraiser; thanks for that link too - just listening to it now! It actually fits the film quite well. Would be fascinating to watch the film with this score instead of Young's more traditional (though still effective) music.
24 April 2012 at 12:46

systemshocks said…
Great article, James. I like Ishikawa stuff. I've only seen Tetsuo once, at the Scala when it first came out, and was so overwhelmed by the imagery and the music that I've never really been able to clarify my thoughts about the film. It's still just a traumatic blur to me -maybe I should watch it again.

On the subject of Industrial soundtracks I always liked Tangerine Dream's soundtrack to Sorcerer. In the liner notes Friedkin reckons that if he had known about them when he was making The Exorcist he would have asked them to score that film as well. Wonder how that would have turned out...
24 April 2012 at 13:46

James Gracey said…
'Traumatic blur' is pretty much a perfection description of Tetsuo, Jon!
I also like me some Tangerine Dream - though I've not heard their music for Sorcerer. I have the soundtracks for Near Dark, Firestarter and Deadly Care.
Hmmm, Tangerine Dream providing the score for The Exorcist? THAT I would like to hear!
25 April 2012 at 18:01