Don't Go in the House 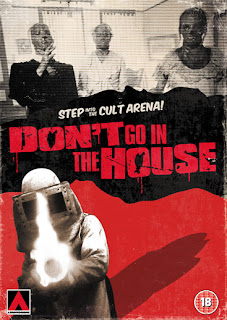 After witnessing one of his co-workers catch fire at the incinerator where he works, Donnie's (Dan Grimaldi) already fragile mindset becomes completely unhinged when he returns home to find his tyrannical mother dead. Now alone in the world, he begins abducting young women, bringing them home to ‘meet’ his mother and burn them alive in a specially built room in his basement.

Heavily influenced by Psycho (1960) and sharing more than a few similarities with titles such as Deranged (1974) and Maniac (1980), Don’t Go In The House features a deranged killer whose murderous rampage is instigated by an abusive matriarch. It sets itself apart from other slashers of its time by attempting to provide insight into what makes the killer at the centre of its downbeat narrative tick. Albeit sleazy and exploitative insight!

Head over to Eye for Film to read my full review of this gloomy slasher that makes for frequently unsettling viewing.
Dan Grimaldi Don't Go in the House Eighties Horror Joseph Ellison Psycho Slasher

Wes said…
Excellent review James and I am in complete agreement with your take on the film. I don't consider the film a classic by any means but the film has that dark undercurrent which stands it apart from similar films from that era. Maniac is often cited as the most nihilistic of the slasher films but I think House is even more so - at least with Maniac, there's the comfort (for lack of a better word) of actors Joe Spinell and Caroline Munroe, but with House, the anonymity of it (and that hollow post-synch soundtrack) just adds to the clammy dreariness. I must confess, I have the US DVD but it's a film I don't revisit very often, (I had forgotten the dream sequence on the beach), but after your review I'm sufficiently enthused to give this one another airing...
9 April 2012 at 10:45

Erich Kuersten said…
Solid writing bro. I'm way too sensitive to want to see this --especially since the TV commercial terrified me as a kid-- but I'm drawn to reviews like yours, and you capture the depressing atmosphere sensation very well (I have seen, for example, Driller Killer -- totally different, as in what you say about Abel F). Anyway, thanks and continue to the couch behinding
9 April 2012 at 19:09

James Gracey said…
Cheers Wes. I was very surprised by how effective and downright gruesome a number of the scenes were in this film. I was only vaguely aware of it - mainly due to its video nasty status (which reminds me; I must skip on over to Plutonium Shores to read your thoughts on it in your video nasty posts) - and enjoyed the more 'fantastical' elements such as the dream sequence and scenes where Donnie is tormented by his burned victims. I've yet to see Maniac actually, but am very interested in checking it out one of these days. And like you, I don't reckon Don't Go in the House will be a film I'll revisit very often!
Thanks for stopping by - hope you're well. :)
10 April 2012 at 14:58

James Gracey said…
Thanks Erich! I think in terms of analytical substance, Abel F's work wins out over stuff like Don't Go in the House. Having said that, I was actually quite surprised by the attempts to explore the protagonist's unhinged mindset in this one. I assumed it was just going to be one depressing murder scene after another. The influence of Psycho on this is very obvious from the outset.
Thanks for leaving a comment! Hope you're well. :)
10 April 2012 at 15:09

Movies for watch said…
This Movie was shown as part of the Quentin Tarantino Film Festival in 1997. Most films on this list are very hard to find on DVD. To be in the Tarantino Film Festival most are over the top. This one was filmed in 1979 and we have a young man who is kidnapping women and burning them to death then dressing them and sitting them in a room with his dead mother. Acting was pretty cheap, best parts were scenes with dead burnt women chasing our main star around the house at the end, makeup on these was outstanding. A good all night drive in flick, For Halloween, naw there is better out there, if your having a pre 1990 festival then go for it. But I can only give it 3 stars.
12 April 2012 at 08:36

James Gracey said…
Thanks for this! I had absolutely no idea that Quentin Tarantino had a film festival. :)
12 April 2012 at 17:15

psynno said…
Glad you're covering this one James. I agree with most here on the depressing atmosphere. The experience made me worry about why I was looking at these films,such was the negative energy coming from this. Agree with Wes that it is quite anonyomous compared to the New York busy vibe in Maniac. This was equally uncomfortable and disturbed, brave almost. The resurrection at the dinner table and burnt corpses were particularly chilling. Heading straight for your write up on Eye for Film.
15 April 2012 at 18:53

James Gracey said…
Yes, the atmosphere and overall feeling of hopelessness really comes across well in this one. I too felt myself pondering why I watch stuff like this - especially during the first death scene. It was incredibly intense and nasty and made me feel VERY uncomfortable. It's an interesting flick with quite a few things going for it - the grim atmospherics, the attempts to explore a deranged mind and the cyclical nature of abuse, and the nightmarish scenes with the burnt corpses in the livingroom; but I don't think I'll be revisiting this one anytime soon! It's a bit too downbeat for me - though that's not intended as a criticism.
16 April 2012 at 11:34