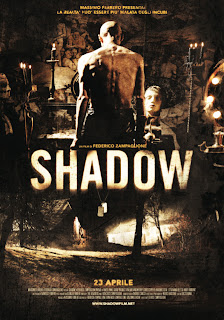 Throughout the 60s and 70s, Italy was responsible for producing some of the most unique, striking and disturbing horror films in the history of the genre. Italian cinema was even bigger than its US counterpart in terms of exports. Mario Bava, Dario Argento, Sergio Martino, Riccardo Freda, Lucio Fulci and Ruggero Deodato are just a few of the filmmakers responsible for creating some of the most lurid, bizarre, searingly brutal and unforgettable imagery to ever bleed across the silver screen. Italians were churning out all sorts of genre gold dust; from spaghetti westerns, stylishly violent giallo films, blistering detective movies, to comedies, erotic dramas and explosive action flicks. This Golden Age of Italian cinema began to fade during the Eighties however, when the government introduced funding legislation that meant films of ‘cultural and national’ interest were given priority over films that were regarded as entertainment. Nowadays television rules the roost in Italy and Italian cinema, let alone Italian horror, is all but dead. Even films that do manage to get funding, rarely gain distribution outside of Italy. It is a truly lamentable situation when one thinks of the swathe of genre movies the country was responsible for in the past. It has been too long a time since anyone but Dario Argento has flown the flag for Italo-horror, and even he has trouble finding funding for his film projects.

Federico Zampaglione’s Shadow should hopefully change all that now. It marks the long overdue and very welcome return of Italian horror. Given the lavish history of Italian horror cinema, and the fact that Zampaglione - often compared to Rob Zombie because of his adoration of horror and his involvement in rock music - was raised on Argento, Martino and Fulci; you would be forgiven for having high expectations. With that in mind, Shadow doesn’t disappoint. The director draws on his nation’s rich history of horror while also exhibiting enough of his own vision to ensure his sophomore film feels fresh and exciting. 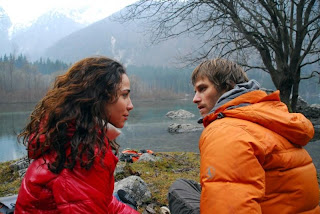 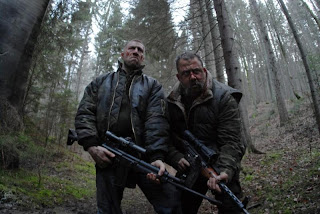 While there are distinct echoes of classic Italian horror throughout Shadow, the film’s primary influences would appear to stem from the recent ‘torture-porn’ sub-genre. Beginning with a Deliverance-like narrative, in which a young couple are menaced in the woods by redneck local types, Shadow soon lurches down a much more outré trail; it’s contemporaries are the likes of recent French shockers such as The Pack and Frontière(s) - it even stars the latter’s Karina Testa. As soon as the characters get lost in the woods and realise that the trigger-happy locals are the least of their worries, and that something much more sinister lurks within the woods, Shadow’s second act really begins to exude its torture-porn influences. Images of people strapped to surgical tables while various sharp implements are lovingly fondled in front of their eyes ensue. However the emphasis in Zampaglione’s film is not on gruesome effects and splashy violence, but rather the threat of violence, its bloody aftermath and the primitive cruelty that man is capable of. While there isn’t anything too extreme in terms of onscreen violence, one particular moment – which also provides a wonderful nod to that classic Italian horror staple, eye-violation – is shockingly effective. 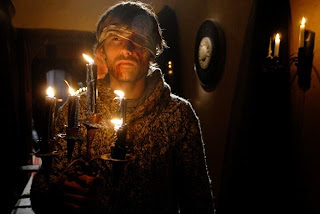 Momentary flourishes of Bavaesque Gothicism – including misty forests and candle-lit explorations of gloomy, cobweb-hewn corridors - lend Shadow a strangely vintage feel. The antagonist, a cadaverous sub-human creature known only as ‘Mortis’ (Nuot Arquint), also seems to have crept out of the dankest depths of a Gothic nightmare. The Golden Age of Italian horror is channelled in the scene where he skulks around his underground domain, fingering bizarre relics and trinkets before picking up a toad and greedily licking its back, beginning to hallucinate. The warped visuals, candy-coloured lighting and skewed camera work, coupled with the rising tension as he trembles with rage and appears to get off on the pain he’s about to inflict upon his captives, all swirl together in loving tribute to the likes of Bava, Argento and Soavi. The score, courtesy of Zampaglione, is also suitably moody and mesmerising and it immediately recalls the work of Goblin with its relentless and driving prog-rhythms. 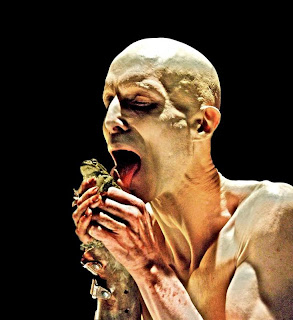 Somewhat typical of Italian horror, the plot is very thin and the emphasis is placed firmly on creating an increasingly nightmarish atmosphere sopping with dread and the threat of violence. Characters are never fully developed and are essentially only there to further on the hellish proceedings. That said, while the story is a simple and unfussy one, the way in which Zampaglione spins it out is highly impressive. Layering on the ominous tone and simmering tension early on, he steadily ratchets up the suspense until it’s unbearable.

Rather like other examples of Italian horror, the pay off just can’t match the build-up, and Shadow’s twist denouement just falls short of sating expectations generated by the gruelling lead up to it. Even so, it’s still a highly atmospheric and suspenseful trip. I for one hope that it can help usher in a resurgence of Italian horror akin to the recent wave of extreme shockers coming out of France. For fans of Euro-horror, Zampaglione is a filmmaker to keep an eye out for; aside from the dark allure of Shadow, his forthcoming film Tulpa looks set to please fans of the giallo. As is his promise to breathe new life into the giallo with it…
Federico Zampaglione Gothic Horror Horror Blog Italian Horror Military Horror review Shadow Torture-Porn

systemshocks said…
Great write up, James. Zampaglione definitely sounds like one to watch. He comes across as able to pump new life into established genres. It will be interesting to see what he does with Tulpa - the first feminist giallo?
10 May 2012 at 10:17

James Gracey said…
Is Tulpa being touted as a feminist giallo?? Most interesting! The first issue of Exquisite Terror carried an interview with Guillem Morales, director of Julia's Eyes. In it he reveals that Julia's Eyes is a giallo - a feminist giallo. Amer could also arguably be described along similar lines - even though it isn't, strictly speaking, a giallo - it addresses 'female' issues and was co-written/co-directed by a woman. I'm just thrilled that there seems to be an emerging trend in horror cinema that wears its giallo influences proudly.

Mykal said…
I was in a real Italian horror phase there for a bit, and this write up puts me right back into the mood. Suddenly my eyes crave saturated colors and mist. I have to check out some of those directors I don't recognize from your first paragraph.