At Midnight I Will Take Your Soul 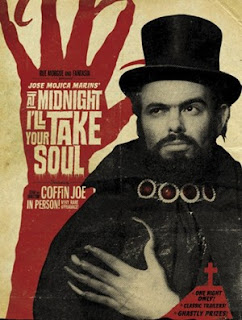 Zé do Caixão (that’s Coffin Joe to you and me) is something of a cult figure both in his native Brazil, and in the wider horror community. The creation of filmmaker José Mojica Marins, who also portrays him onscreen, Coffin Joe has appeared in various TV anthologies, comics and sequels, as well as countless appearances in other films by the director. A nightmarishly striking figure - sporting long black cloak, top hat and grotesquely long fingernails - Joe first appeared in At Midnight I’ll Take Your Soul, which was also the first Brazilian horror film.

A curious and carnivalesque oddity of a film, At Midnight follows the increasingly crazed exploits of undertaker Joe, as he attempts to find a woman 'worthy' of bearing him a child - and thus helping him obtain immortality by extending his bloodline. Addressing concepts such as faith, free will, social responsibility and politics, Marins’ film is an existential horror that unfolds with impish glee. While fairly tame by today’s standards, it still makes quite a shocking impact with its antihero’s atheistic rants and sociopathic tendencies. Brazil is a deeply devout Catholic country and when audiences gathered to watch At Midnight they basically encountered a formidable bogeyman mocking and ridiculing the very foundations of their beliefs and their faith.

Joe believes his atheism and free will elevates him above his superstitious neighbours. His fiery monologues touch on the same notions apparent in Nietzsche’s concept of the ‘superman’, as Joe does not follow common morality, preferring to forge his own and rise above ‘herd mentality.’ His actions are so shocking because he doesn’t adhere to any sort of moral code. He terrorises the other villagers who are portrayed as feeble and weak, and he rejects spirituality, choosing to maintain a rational mind. Coldly rational. His wife is unable to bear children, so he sees nothing wrong with killing her and setting out to find a woman worthy of having his children. He tortures people to test their emotional strength. 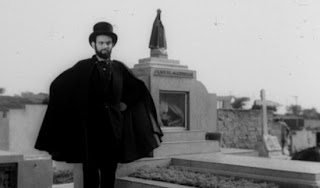 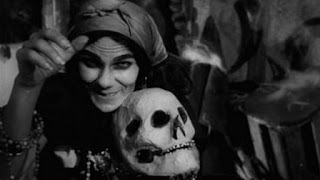 While he carries out atrocious acts, such as murdering his wife and best friend, and then raping his dead friend’s fiancée, Joe is never portrayed as completely evil; oftentimes he just appears to be morbidly mischievous (eating meat on Palm Sunday). His grotesque activities are fuelled by his need to have a child and Marins’ performance does manage to evoke some sympathy for the crazed, strangely charismatic ghoul. While the film is essentially a series of strung-together scenes in which Joe hypothesises religion and free will, while bumping off friends and villagers in his quest to find the ultimate mate, it is Marins’ electric charisma that holds everything together and makes At Midnight such compelling viewing.

There are a number of incredibly atmospheric moments throughout, but none more so than the scene in which Joe begins to realise that the curse placed on him by one of his victims is actually about to be fulfilled. Wandering through a gloomy forest he notices various foretold events occurring before his eyes, marking his imminent demise. No music accompanies this scene, only the low moan of a desolate wind through trees. Tension builds with every realisation that the curse is in effect and a meeting with the devil is nigh. The home-made effects of the catacomb-set finale, as Joe is confronted by the animated corpses of his victims, are effectively realised and further add to the film’s off-kilter tone. 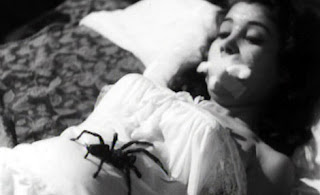 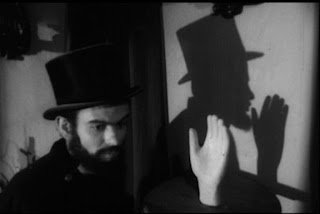 While Joe denounces God and the existence of the supernatural, and it appears that his demise is brought about by the gypsy curse placed on him, Marins maintains a certain degree of ambiguity throughout proceedings. As Joe’s histrionics mount, it becomes clear that all these horrifying visions could just be figments of his already deranged mind.

José Mojica Marins is a fascinating filmmaker, particularly when one takes into consideration the subject matter of his films, the often rigid regimes of censorship imposed upon them and the low budgets with which they were realised. Usually working with amateur actors and production teams, his work has the feel of something untamed and genuinely off the wall. At Midnight is a highly subversive, provocative and idiosyncratic film worth savouring on a dark and stormy night.
At Midnight I'll Take Your Soul Brazilian Horror Coffin Joe Existential Horror Family Horror José Mojica Marins Sixties Horror Zé do Caixão

Will Errickson said…
I really AT MIDNIGHT's rather "homemade" vibe, and enjoyed it all much more than I'd expected. Another great review!
21 May 2012 at 21:10

Wes said…
Great choice James, I saw the film again recently and the phrase rough around the edges seems invented for it. Wonderful stuff nonetheless, and I enjoyed Joe's blend of Nietzsche-meets-Dawkins philosophy - clearly Marins was striving for something more ambitious than a creaky Universal knockoff. Even better is This Night I'll Possess Your Corpse, a huge evolutionary leap from At Midnight and Marins' 2008 Coffin Joe film Embodiment of Evil is well worth seeing and quite extraordinary that Marins was 72 when he made it...
21 May 2012 at 21:21

James Gracey said…
Cheers Will. Yeah, I loved how Marins made the low budget work for him too. At Midnight is one of the most unusual films I've seen in some time.

Wes, I had a Coffin Joe movie marathon recently and agree with you about the leaps and bounds This Night made over At Midnight. And as for Embodiment... More Coffin Joe reviews to come! :)

Jenn if ever I were to get a tattoo - I'd seriously consider a Coffin Joe styled one. Or something based on that shot in Opera of the eye with needles stuck under it...
22 May 2012 at 10:13

The Vicar of VHS said…
One of my all time faves! I do prefer THIS NIGHT, but that's like saying "I prefer this suitcase full of money to that other suitcase, which is also full of money." :)

But for pure Coffin Joe derangement, it's hard to top AWAKENING OF THE BEAST. Not one of the Ze trilogy per se, but still, a truly insane movie.

@Jenn--After I got my Naschy tatt, I started thinking about having Ze wrapped around on the same arm, on the underside. Much more painful there, but it's Coffin Joe, so that's as it should be. ;)
22 May 2012 at 14:34

James Gracey said…
I'm a relative late-comer to the kerr-azy world of Coffin Joe; but I've been absolutely smitten by it. I think my favourite of the Ze trilogy is also This Night. I picked up a beautiful box set a while back that also has Awakening of the Beast in it - I'm looking forward to watching that one.
22 May 2012 at 18:08

The Vicar of VHS said…
You're in for a treat. :) What I find so fascinating about Mojica is that nobody was making movies like he was, and really nobody has since. Brazil had no horror movie tradition before him. There might be a few places where you can detect a Universal Horrors influence (I'm thinking the great atmosphere in his graveyard scenes, etc.), but for the most part he was working without a model, pulling it all straight out of his deranged mind. And what he was able to achieve on nearly nonexistent budgets was astounding. If you watch EMBODIMENT OF EVIL (and everyone should!) you can see that he always had the cinematic genius--the only thing he didn't have (until then) was money. When he got the money...hoo boy!

The Duke and I have reviewed many of his other, more obscure flicks on the site. Each one is a gem in its own way. I also recommend THE STRANGE WORLD OF COFFIN JOE (a wild anthology flick with Ze as Crypt Keeper) and THE BLACK EXORCISM OF COFFIN JOE. Wonderful, MAD stuff!
22 May 2012 at 18:59

James Gracey said…
Agreed! I've never seen anything even remotely like his style before. Such deranged and 'unsafe' narratives. I did indeed watch Embodiment. I loved it, and a review is forthcoming... Heading over to your blog now to read up on those obscure Ze treats. Thanks so much for dropping by! :)
22 May 2012 at 19:33

deadlydolls said…
It's been a few years since I sat down to watch this one, but this does remind me that I never went back to the series! At Midnight is such a DIFFERENT film and I really should give the rest of the sequels a chance.
31 May 2012 at 12:35