A Mummy Aboard the Titanic?

June 11, 2012
On a recent visit to the newly opened Titanic Belfast®, I’m sure you can imagine my excitement when I discovered that one of the myths revolving around the sinking of the ill-fated vessel concerns a mummy that was secretly stowed away onboard. There was even a creepy mummy on display in the centre. Naturally I took pictures.

The mummy has been a popular stock figure throughout the history of horror cinema and literature, and it has long been associated with a terrible curse that brings about the untimely deaths of those who dare to enter its sacred burial place and disrupt its slumber. This belief probably stems from the supposed curse on the tomb of Tutankhamen and the death of Lord Carnarvon who was present during its excavation. Six weeks after his involvement in the project, Carnarvon died from blood poisoning caused by a mosquito bite.

From Bram Stoker’s 1903 novel The Jewel of Seven Stars, (later adapted as the 1971 film Blood from the Mummy's Tomb) to Universal’s Boris Karloff starring The Mummy, to the woeful Brendan Frazer action-horror series; mummy movie narratives rarely deviate from the central idea that a curse will destroy the lives of those who encounter the mummy and desecrate its tomb.

You have to admit, the idea of a mummy shuffling around the chilly, moonlit decks of the doomed Titanic is an irresistible one that evokes all manner of wonderfully nightmarish imagery. Somewhat typical of the eerie tales of mummies, the myth of the one aboard HMS Titanic is also riddled with curses and gruesome deaths.

After reading up on the subject, it would appear there are several variations of the tale, most involving a foolish rich Englishman who purchases an Egyptian mummy. Before it is hidden within the bowels of the Titanic, it causes the mysterious deaths of everyone involved in its journey from Egypt to England; everyone from the Englishman’s social circle to the night-watchman of the museum where it was briefly exhibited, reportedly suffered horrific deaths.* Another version of the tale tells of how a shady art dealer smuggled it onboard the ship by bribing crewmembers… 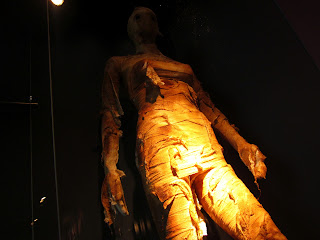 Further research would indicate that the myth of the Titanic mummy stems from the twisted imaginations of two men; ghost story enthusiasts William Stead and Douglas Murray. The macabre-minded; you gotta love ‘em. William Stead was a journalist, a believer in mysticism and a frequenter of mediums. A passenger aboard the Titanic, Stead revealed to other passengers that he had actually been warned by a spiritualist not to make the trip as the ship was doomed. He also reportedly regaled them with the story of a mummy's curse that he and Murray had previously concocted concerning an art collector friend of theirs who, after displaying a mummy in his parlour, experienced 'odd' occurrences around his house. There was also talk of the lid of a sarcophagus from the British Museum that depicted the terrifying face of its occupant; a tormented soul determined to bring misery to those who encountered her.

This was most likely the lid of the Priestess of Amen-Ra’s coffin, an artefact which is on display in the Bristish Museum. It has often been referred to as the 'Unlucky Mummy', even though it isn't actually a mummy, but an inner-coffin lid.

After the ship sank and Stead perished with thousands of others, a survivor allegedly recounted the tale of the mummy in an interview with an American newspaper. Stead’s presence on Titanic and his ‘cursed mummy’ tale were swirled together by a salivating press who lapped up the story and inadvertently created one of the most darkly fascinating myths surrounding the Titanic.

*Various people involved in the transportation of the mummy from Egypt to London were said to have died from various mysterious diseases, freaky car accidents - a photographer killed himself because he was so disturbed by a photo of the coffin lid he developed - others were last seen wandering into the desert never to be seen or heard from again. The more 'fortunate' ones didn't die but either went insane, were involved in shocking accidents or lost their fortunes and suffered life-altering bad luck. Once the mummy reached London and the Englishman who bought it 'failed to arrive' to collect it, it was eventually donated to the British Museum. Staff reported hearing strange noises coming from inside the coffin, and violent noises echoed throughout the museum in the night. As soon as they could get rid of it, the mummy was stowed away on the Titanic and, depending on which story you read, either made it to America on a lifeboat after the ship sank, or joined those who perished in the sinking at the bottom of the ocean...
Belfast Curse Mummy Titanic Urban Legend

Wes said…
A great story James, and one I hadn't heard before now, fantastic stuff. Hailing from Cork, I've always been interested in the Titanic, and I would highly recommend folks track down composer Gavin Bryars' 1975 recording The Sinking of the Titanic, which imagines the ship's orchestra playing on as the stricken liner descends into the depths, the music becoming increasingly drenched in reverb and distortion. The piece also includes voices of survivors speaking about the disaster. It's quite wonderful.
11 June 2012 at 21:34

James Gracey said…
I wasn't familiar with the story either, Wes. Obviously as a horror nut, I loved it!
I haven't heard of Gavin Bryars, but that piece of music sounds beautiful. Must try to check it out - thanks for the heads up. :)
12 June 2012 at 11:43

systemshocks said…
Fascinating stuff, James, especially what you say about the Mummy stories all following similar themes. As I read your post I kept thinking of Bubba Ho Tep. Not sure why!
12 June 2012 at 18:39

James Gracey said…
Glad to remind you of it, Doc. I have to admit, I'd never heard the story before. Now I'm fascinated by it.

I love Bubba Ho-Tep, Jon! Such a strange and great film.
Yes, from reading up on the myth, most of the stories follow a very similar pattern, with grisly deaths befalling those involved in the transport of the mummy to England before it boarded the Titanic. People dying from mysterious diseases, freaky car accidents - a photographer killing himself because he was so disturbed by a photo he took of the coffin lid - and others last seen wandering into the desert never to be seen again. Great stuff! ;)
13 June 2012 at 10:37