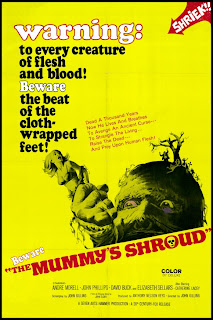 When a group of British archaeologists uncover the secret desert tomb of a child Pharaoh outside Cairo, they invoke an ancient curse and the murderous wrath of a mummy...

If the above synopsis sounds familiar, that's because it is. The Mummy's Shroud boasts a typical mummy movie narrative in which a group of stuffy British archaeologists go snooping around in a Pharaoh's tomb and one by one are violently killed by a mummy - in this case, the faithful servant of the child prince whose burial place they desecrate. It was the third mummy movie made by Hammer. Director Gilling and writer Anthony Hinds don't really bring anything different or unusual to the tale, as it unravels (sorry) in the most stringently conventional way. Gilling's prior Hammer titles The Reptile and Plague of the Zombies were much more interesting, offbeat and effective horror films that at least tampered with convention and expectations. While the predictability slightly hinders the plot, there are at least several effectively handled and atmospheric moments of tension throughout. The titular creature is relegated to the shadows for the most part, as are the various moments of violence.

It begins with a lengthy narration-heavy prologue depicting the early years of the child prince Kah-to-Bey, who flees into exile with his faithful servant Prem after his father is murdered in a bloody coup. When hiding in the desert, the prince's small band of followers eventually dies, including the prince himself who is buried by Prem. Throughout these scenes the film's low budget is obvious but not distracting. Once the story moves to the 1920s when the tomb of the prince is discovered, the action becomes somewhat sporadic and further diluted by the overly talky scenes that bookend it. Events shuffle along at a somnambulistic pace with scene after scene of characters standing around sweating in khaki suits, mopping their brows and uttering expository dialogue in an unmistakably British - re: stiff upper-lipped - manner. Despite this, the dialogue is as colourful and wryly humorous as what you'd expect from a Hammer production. The film also contains all the usual harbingers of doom you'd expect to find in a traditional mummy film, including crystal ball reading clairvoyant Haiti (Catherine Lacey, The Sorcerers) and her sinister son Hasmid (Roger Delgado), the guardian of the tomb. It is they who instigate the mummy's rampage by reciting text from a mystical burial shroud. 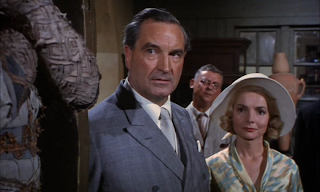 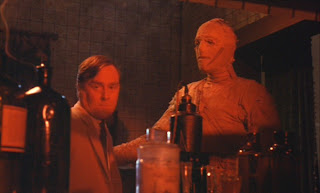 A number of strikingly lit scenes, such as those in the clairvoyant's creepy boudoir and Harry Newton's darkroom possess an infernal, Bava-esque atmosphere. Scenes play out in limited locations which heightens the sense of claustrophobia as the story progresses. By the time the archaeologists realise that they're in danger because of their involvement in the excavation of the tomb and their increasingly panicked attempts to buy their way out of the city become the driving force of the story, events hang heavy with a clipped and quietly sweltering desperation. After the majority of the group are murderlised by the mummy - which usually sneaks up behind its victims and crushes their skull/throws photo development solution in their face/flings them from a high window etc - the third act picks up the pace when the surviving characters finally take action and attempt to stop the killing spree. 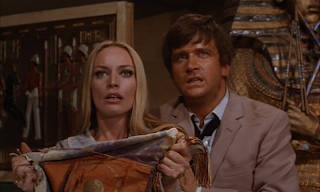 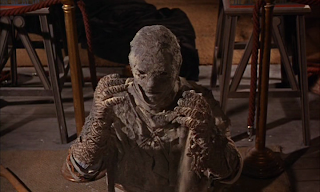 The cast is populated by familiar Hammer faces such as Andre Morell (Hound of the Baskervilles, Plague of the Zombies, Camp on Blood Island) as the dignified but doomed leader of the expedition, Sir Basil Walden, and Michael Ripper (The Reptile, Plague of the Zombies, Curse of the Mummy's Tomb, Dracula Has Risen from the Grave) as the harassed and put-upon Longbarrow. Indeed, Longbarrow is the only character who evokes any kind of sympathy due to Ripper's effectively endearing performance. Other characters aren't given much to do, and the admittedly attractive hero and heroine (David Buck and Maggie Kimberly) are a little bland.

While The Mummy's Shroud sticks rigidly to convention, it still provides creepy entertainment with a touch of that unmistakable Hammer class; even if it is one of their lesser titles.
British Horror Hammer Horror Horror Film Review Mummy Sixties Horror