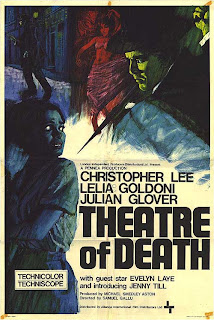 Opening with a scene in which an attractive young woman is forced onto a guillotine and decapitated in front of an appreciative audience, only for her to emerge alive and well from behind the theatre curtain to accept her applause, Theatre of Death is intent on letting us know from the outset that all will not be as it seems. The lines between what is real and what is not twist and turn throughout proceedings. Setting the story in the real-life Theatre du Grand Guignol in Paris is an inspired choice. Between the years of 1897 and 1962 it specialised in the production of deliberately shocking and lurid plays, the raison d’être of which was to depict bloody scenes of murder and torture on stage to titillate and terrify audiences.

Amalgamating aspects of Phantom of the Opera (a shadowy figure skulking behind the scenes of a theatre production), typical vampire movie traits (victims found drained of blood) and the slightest hints of possession movie conventions (hypnotism, meddling with the past), Theatre of Blood is always intriguing though at times feels a little haphazard. Gallu imbues proceedings with deliciously Gothic flourishes such as secret passages behind bookcases, eviiiiil hypnotists, damsels in distress, individuals dogged by their past, hooded killers, grisly murders and the creepy theatre setting itself. There are also a few creaky clichés, including portraits with spy-holes in the eyes and cobwebby dungeons beneath the titular venue, but they only add to the film's spooky charm. Various stalking scenes are filmed with a handheld camera, lending events an off-kilter immediacy. The film even boasts a giallo-esque killer, decked out in a long black coat, fedora hat, black leather gloves and utilising a strangely shaped blade to stab their victims and drain them of blood. 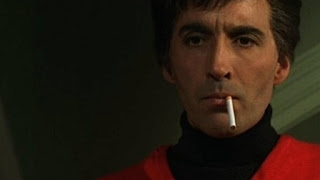 The cast is initially headed by an impressively imposing Christopher Lee. When we're first introduced to him, he is creeping around a series of hidden passages spying on the cast and crew of his theatre production. These scenes are ripe with a sleazy and menacing voyeurism that automatically fingers Darvas as a sinister figure to be wary of. That he’s meddling in a new acting technique that involves hypnosis also casts suspicion on him. That and the fact that he's played by Christopher Lee! Unfortunately Darvas goes missing half-way through proceedings and the film flounders a little without Lee's steely gravitas. The brief scenes depicting the vampiric murderer stalking and killing their prey (off-camera after a freeze-frame on the victims screaming face) feel tacked on as they’re slotted in-between the already intriguing shenanigans at the theatre, but their presence is justified by the twisted reveal at the end.

The central mystery is sustained well with an abundance of red herrings and mysterious disappearances to keep us guessing who the culprit is. Actress Dani (Lelia Goldoni) is revealed to have suffered a nervous breakdown, her pretty roommate Nicole (Jenny Till) has fallen for sinister Darvas, the police surgeon (Julian Glover) courting Dani has had to stop practising surgery due to an ‘incident’ in his recent past. Everyone is coloured with just the right amount of ambiguity to suggest their potential involvement in the gruesome crimes. There are also hushed whisperings of the fate of Darvas' father who went missing years ago, his body never found. Shades of The Picture of Dorian Gray abound when it is suggested that perhaps Darvas Jnr and Snr are one and the same… Darvas wrote 12 plays, but the twelfth one has not been performed yet. Could it hold a clue to the ghastly murders? With so much going on Theatre of Death is oftentimes a little overwhelming, and all the expository dialogue doesn’t help. The pace picks up and the plot strands are pulled together as it nears its climax though. 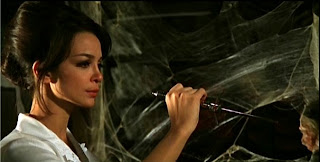 One of the stand out moments occurs when the cast gather to rehearse a new script inspired by the Salem witchcraft trials. Nicole is hypnotised and appears to be channelling the actions of someone from the past as she advances upon Dani with a red hot poker. Are ghosts from the past possessing the actors in order to relive past macabre events on stage? A number of tantalising theories regarding the killer’s modus operandi are suggested, such as a sexual bloodlust, a macabre syndrome or a desire for eternal life. The genuinely surprising twist not only unveils the killer, it also reveals that their bloodlust is a morbid but natural disposition due to a traumatic Donner Party-like experience in their childhood when they were fed blood by their mother to ensure their survival in the wilderness.