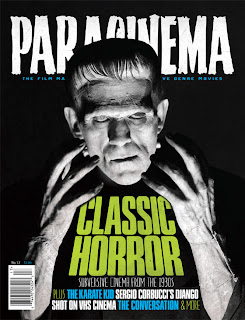 Issue 17 of Paracinema Magazine is now available to pre-order. As ever, its packed to the gills with all manner of insightful and provocative articles and essays on genre cinema. Amongst the titles in this issue are “Endemic Madness”: Subversive 1930s Horror Cinema by Jon Towlson, You Can Clean Up the Mess, But Don’t Touch My Coffin: The Legacy of Sergio Corbucci’s Django by Ed Kurtz and I Don’t Want to See What I Hear: Paranoia and Personality Eradication in The Conversation by Todd Garbarini.

Issue 17 also contains one of my own essays, an examination of the Gothic influences of Sergio Martino’s giallo Your Vice is a Locked Room and Only I Have the Key, titled Black Cats and Black Gloves.

Sound good? Head over to Paracinema.net to pre-order your copy now. Go on, support independent publishing, and get your paws on a great magazine that is produced by fans of genre cinema, for fans of genre cinema.
Genre Movies Giallo Independent Publishing Italian Horror Paracinema Magazine Sergio Martino Your Vice Is A Locked Room And Only I Have The Key