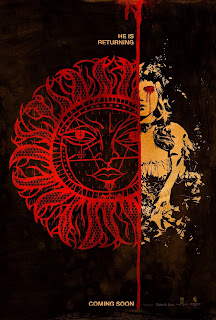 Based on Hardy’s own novel Cowboys For Christ, The Wicker Tree isn’t so much a sequel to The Wicker Man, more a curious companion piece. Incorporating many of the same themes, though in a much more knowing way, it is the tale of two young chaste American missionaries who travel to the wilds of Scotland to preach the gospel of Jesus Christ to people who ‘don’t believe in angels.’ Seemingly embraced by the local community, the pair are invited to participate in the annual May Queen celebrations, with inevitably fatal consequences…

The Wicker Man cast a long shadow over cult horror cinema. While it is none other than Robin Hardy who has returned to plough the furrow of folk horror, religious extremism and earthy sensuality he essentially created with that film, the results this time around are much less fertile. The source material, his novel Cowboys For Christ, unfurled as a slow-burning, evocatively written work that pitched modern evangelical Christianity against paganism and built slowly and surely towards an expected but still quietly powerful denouement. Obviously in adapting material from page to screen, there will be certain elements that get lost in the translation. Whole subplots that enriched characterisation in the book never made it to the screen and the result damages certain characters and stunts the sympathy audiences should have for them.

While there was a night-dark humour that undercut events in The Wicker Man - playful amusement was generated from Sergeant Howie’s devout conservatism and its contrast with the hedonistic islanders - it was always backed by sinister foreshadowing and creeping dread. Humour is much more farcical and knowing here and the result is an uneven tone that lurches from Monty Pythonesque shenanigans involving kilts and ice-cubes, to barbed comments on religion and the Silver Ring virginity pledge popular in American Christian communities. Of course it isn’t really fair to judge this film solely on the expectations its classic predecessor conjures. While the knowingness removes tension (we know from the outset the missionaries are going to become victims of a blood sacrifice), it is well handled and effective in certain instances. Certain exchanges between characters and myriad double-edged comments essentially wink at the audience throughout proceedings. This is rather chillingly realised in the scene where the missionaries are joined in song by the villagers when they sing the hymn Power in The Blood. The cross purposes of both parties as they sing the hymn, with its sacrificial connotations (which are completely lost on the missionaries), are never more sinisterly realised. 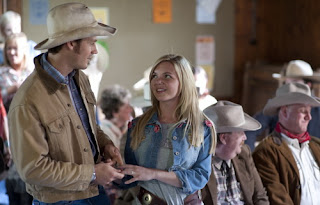 Unlike the remote location of The Wicker Man, the curious setting of The Wicker Tree is a village located on the border between Scotland and England. While it may seem alien to a couple of American missionaries, it in no way feels as cut off or isolated as the setting of its predecessor. We learn that the town’s water has been polluted by a spill at a nuclear power station and the inhabitants have become infertile. The owner of the power station, Lord Lachlan Morrison (Graham McTavish), has turned to primitive pagan blood sacrifices to the ancient goddess Sulis in a desperate attempt to give hope to the barren people. The book gradually unveiled this fact, but in the adaptation it is all explained in a brief moment of exposition that possesses none of the haunting resonance of the source material. Also brief is a cameo by Sir Christopher Lee, whose appearance in a flashback professing the power of nature and sacrifice, connects the two films; but it’s never made clear if he is in fact Lord Summerisle or not. 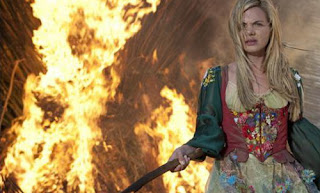 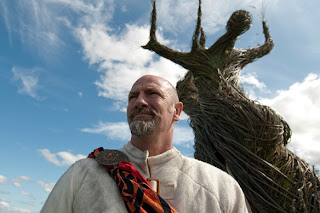 The protagonists, cowboy Steve and gospel singer Beth (Brittania Nicol and Henry Garrett) are painted with the broadest of strokes; two-dimensional dumb Americans who naïvely preach redemption without ever really grasping the deeper implications. Some attempts are made to flesh them out, though these remain sadly undeveloped. Hardy seems to imply that they are as lost and desperate as the pagan villagers; both parties leaning on religion as a solution for something they lack or have no control over. A couple of scenes suggest that this pair are somehow on the wrong path, forced to bury and conceal their true selves. A momentary shard of pathos glints in the scene in which Beth listens to one of her old CDs and reminisces on her past ‘pop’ persona - a Britney Spears alike who sings about ‘Trailer Trash Love’ - before forcing herself to focus on the task at hand. Likewise, the scene where Steve deftly uses a deck of cards to tell the story of Christ - coupled with the realisation that he only stumbled into Christianity because of his infatuation with Beth - suggest he’d much rather be elsewhere and is ill at ease with the responsibility of being a missionary. This should enhance audience sympathy and heighten suspense, but it’s all too brief and as a result the inevitable fate of the missionaries lacks the powerful impact it should have.

Beautiful cinematography and interesting use of traditional folk songs and hymns provide the film with a lush and evocative atmosphere. Part homage, part pastiche, part satirical send-up, The Wicker Tree emerges as a light/half hearted variation of the irresistible themes of The Wicker Man and while it lacks the power and scope of that film, it’s still an interesting and quirky meditation on the sinister nature of religion.
British Horror Cowboys For Christ Folk Horror Paganism Robin Hardy The Wicker Man The Wicker Tree

deadlydolls said…
I think I share your opinion. I loved the look and music, and found myself enjoying the film even though it was so clearly flawed. It wasn't what I wanted, but I like your explanation of it being something of an homage AND send-up of the original.
12 September 2012 at 03:49

Marie Robinson said…
I am curious to see this movie, being, of course, a huge fan of the Wicker Man! And Scottish accents.
12 September 2012 at 05:50

James Gracey said…
It really wasn't what I hoped for either, but I still found it oddly enjoyable and reckon it won't be too long before I have to revisit it.
Plus, it has more intelligence, style and wit in that Carry On alike scene with the kilt and ice-cubes than the whole of that Nicolas Cage abomination!

psynno said…
It sounds like the characters in the book are more fleshed out and believable than the film. Agree that it is completely uneven in tone. There were still some very curious scenes and I wasn't sure what to make of it: the woman disappearing in the hotel room when he changes the channel? I expected more after seeing the bizarre trailer.
17 September 2012 at 09:55

James Gracey said…
I reckon this one warrants a second viewing! I don't even remember the scene you mention where the woman disappears in the hotel room. I thought the book was curious enough, but the film is almost impossible to categorise. That said, I did enjoy it and I believe it has more going for it than not.
24 September 2012 at 18:12