February 09, 2013
An artist, gripped by the clutching fingers of a dead past; a scientist, defying nature in the dark realm of the senses; an expectant father, driven mad by creeping shadows… These are the chilling tales relayed by a lone, haunted woman in Dyad Production’s latest show, Female Gothic. A one-woman theatrical production, this dark celebration of female gothic literature is adapted and performed by Rebecca Vaughan, who assumes the role of narrator, as well as frequently channelling the various characters that move throughout the three distinct tales of quiet terror she shares.

Victorian fascination with tales of supernatural mystery and the macabre has created an enduring legacy of Gothic fiction; but, with a mere handful of exceptions, it is often, unfairly, the male writers that are remembered. Many eerie tales of terror from female writers of that era – which subversively articulated and highlighted women's dissatisfaction and frustration with patriarchal society - have gathered dust and been forgotten. Vaughan’s show not only casts light on the plight that has befallen many female writers of gothic fiction, but also demonstrates that they had the ability to chill the soul just as powerfully as their male contemporaries. Female Gothic essentially tells four stories: three classic tales of gothic horror, and the narrator’s own autobiographical account; which she deftly weaves in and out of the other narratives, hinting at her tragic denouement. The stories she draws from are Five Senses and The Shadow by Edith Nesbit, and The Cold Embrace by ME Braddon. These are recommended for those still unfamiliar with them.

Scorned spectral lovers, visitations from beyond the grave, premature burials, fractured psyches, malevolently sentient shadows and unavoidable tragedy stalk forth from each of the stories. With the last tale, my personal favourite, Vaughan completely adopts the role of one of the terrified characters – and narrates events from her point of view. Ambiguity takes centre stage in this story, in which an expectant family appear to be haunted by a ‘crouching shadow’ which emerges from a cupboard. Is this some form of poltergeist, or indeed, a manifestation of marital/familial strife and anxiety? The dark beauty is in the haunting ambiguousness of it all.


Aided by atmospheric lighting, moody sound effects and Vaughan’s perfectly nuanced performance, the dark and simply furnished space is transformed from cosy gas-lit parlour to the likes of a creepy crypt, a scientist’s laboratory, a masked ball and a lonely country road. Upon the darkened stage sits a single armchair, a small table atop which rests a candelabrum sporting three candles (one for each spine-chilling tale), and a white curtain draping down from the back – onto which Vaughan’s shadow is cast to eerie effect during several moments. In this minimalist space she is able to create additional pieces of set entirely through mime. Each story relies heavily on suggestion, ensuring all manner of horrific and shiver-some imagery is conjured in the minds of the audience. Familiar gothic archetypes such as the doomed lovers, the fervidly ambitious scientist and the nervous spinster come alive through her words and movements. Her evocative use of language – both spoken and body – heightens tension and the ever increasing atmosphere of dreadful anticipation shared by a group of people huddled together in the dark to listen to ghost stories; to which Vaughan speaks directly, ensuring we’re as much a part of the production as anything else. 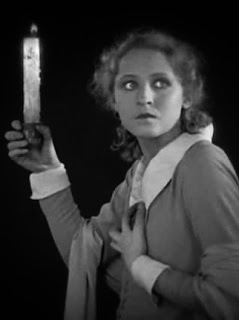 The term ‘Female Gothic’ was first used by Ellen Moers in Literary Women (1976) and is defined as "the work that women writers have done in the literary mode that, since the eighteenth century, we have called the Gothic." The Female Gothic expresses criticism of patriarchal, male-dominated social structures and serves as an expression and articulation of female independence. Often focussing upon gender differences and oppression, works typifying this, for want of a better term, sub-genre, usually feature a woman protagonist who is hounded (both physically and psychologically) by a Byronic patriarchal figure in unfamiliar spaces and landscapes. The Female Gothic usually shuns blatant scenes of violence and sexual morbidity typical of gothic horror, opting for the ‘explained supernatural.’ The forerunners of the movement, which emerged during the late eighteenth and early nineteenth century, were the likes Clara Reeve, Sophia Lee, and Anne Radcliffe, and the baton was later picked up by the likes of Mary Shelley and the Brontes.

According to a recent interview conducted by Culture Northern Ireland, Vaughan revealed: 'Famous in their own day, these stories are now largely forgotten. The authors are forgotten also, or, like George Eliot, Edith Wharton and E Nesbit, are known only for their other works. Whereas male writers tended to produce stories with immediate, visceral impact, those written by women concealed the horror, revealing their truths in a more subtle and, I believe, terrifying fashion.'

Gothic fiction was frequently derided, mainly because of its large female readership – but within these texts, the socially excluded and marginalised found escape, hope and credence to their woes of patriarchal oppression, and as a literary genre, women writers left an indelible, important and undeniable mark upon it. Discovering hundreds of stories produced by women, Vaughan began to think they might provide the basis for a new theatrical production. And what a production it is. Go forth and seek it out on a darkened stage near you.

Female Gothic began its Northern Irish tour at the Market Place Theatre, Armagh, on February 6, and concludes at The Playhouse, Derry/Londonderry on February 13. For other tour dates click here; it is highly recommended that you do...
Adaptation Dyad Productions Female Gothic Gothic Horror Literature One Woman Show Rebecca Vaughan Stage Show Theatre

Anonymous said…
A superb narration of this play which I too found haunting and quite spell-binding when I saw it a few months ago. James Gracey has caught and described the moments and atmosphere of this work perfectly.
10 February 2013 at 09:34