The Return of Diabolique Magazine... 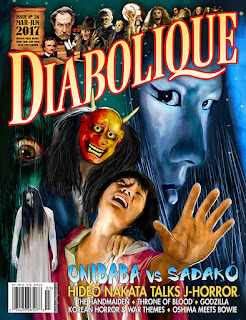 After a brief hiatus, Diabolique is now back in print and better than ever. At the helm is a new team of editors (Kat Ellinger, Samm Deighan, Heather Drain and Rebecca Booth) whose knowledge of horror cinema is surpassed only by their passion for it; not to mention their dedication to resurrecting Diabolique in print form and building on its legacy of thoughtful, insightful and compelling content.

This is followed with features on the blood soaked tradition of Japanese theater in relation to the work of Akira Kurosawa and Jacobean revenge, the shocking horrors of Korean war portrayed in genre film and a tribute to the work of the late great David Bowie.

Add to that some sizzling sensuality and lesbian love, as we unwrap Chan-wook Park’s provocative The Handmaiden, and last, but certainly not least, a homage to the mythical beast Godzilla, and we promise you this is one of our boldest and most potent issues yet!"