Behind the Couch Turns 8 Years Old! 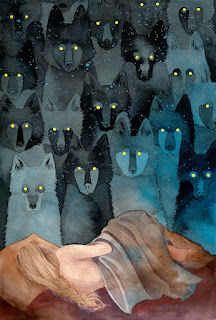 Behind the Couch turned 8 years old this month!

This year I have dedicated most of my time to researching and writing a book on The Company of Wolves for Devil’s Advocates, a series devoted to exploring the classics of horror cinema. Co-written by Irish filmmaker Neil Jordan and British novelist Angela Carter, and based on several short stories from Carter's collection The Bloody Chamber, The Company of Wolves is a darkly Gothic, boldly feminist reinvention of the fairy tale of Little Red Riding Hood. With werewolves. Released in the early 1980s, a time which produced several classic werewolf films (including An American Werewolf in London and The Howling), The Company of Wolves sets itself apart from the pack with its overtly literary roots, feminist stance, and art-house leanings.

Throughout the book (which I am currently proofing) I’ve placed the film in the context of the careers of its creators, explored its place in werewolf cinema and its strong feminist message, and looked at the history of the tale of Red Riding Hood and how such fairy tales, and the ways they are told and retold, have contributed to the construction of gender roles/relations and influenced various customs and mores of society. The book will hopefully be published next spring (stay tuned for more info). As I have been watching a lot of werewolf films and reading books about werewolf cinema, lore and literature, I thought it would be fun to post some of my discoveries to the blog, including several archaic rituals that enable lycanthropic transformations (!!).

Away from all things lycanthropic, I have continued to review DVDs, books and graphic novels for Exquisite Terror and was also lucky enough to interview fellow Devil's Advocates authors Alexandra Heller-Nicholas and Jez Conolly about their books on Suspiria and Dead of Night, respectively. I have continued to contribute to Diabolique, including a piece exploring and celebrating Sir Christopher Lee’s ground-breaking portrayal of Count Dracula in a special issue entirely devoted to the actor; one of the twentieth century’s most important and enduring icons of horror cinema.

I helped to proofread Jon Towlson’s new book on 1930s horror cinema and had my first short story published. I was also invited to contribute a few words on The Company of Wolves to a forthcoming book on The Howling and werewolf cinema by Lee Gambin – more info on this in the coming months.

To everyone who has strayed from the path and dropped by over the last year - thank you! I hope you'll continue to do so.