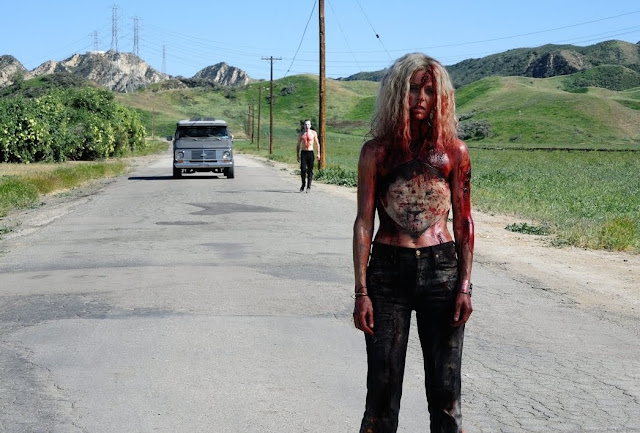 A group of carnival sideshow workers are abducted and forced to fight for their lives against a gang of killer clowns as mysterious, bewigged oligarchs in aristocratic period garb wager bets on who will survive.

31 is a film about violence as entertainment and death as spectacle. It’s a film about the depths of human depravity. It’s also about survival and the things rational, sane and civilised people will do when they are backed into a corner and forced to fight for their lives. While it riffs on the likes of similarly themed films such as The Most Dangerous Game (1932), The Running Man (1987) and Death Race (1975), it is all, obviously, presented in Rob Zombie’s inimitable and furiously violent style.

Like so much of Zombie’s film work, 31 has strong echoes of Tobe Hooper’s The Texas Chain Saw Massacre (1974), though more so of its sequel (1986), both stylistically and in its fiendishly warped sense of humour. Film scholar Robin Wood once said The Texas Chain Saw Massacre "brings to focus a spirit of negativity [...] that seems to lie not far below the surface of the modern collective consciousness"*. With 31, Zombie doesn’t so much bring this same nasty spirit to focus as relentlessly pulverise his audience with it. He also introduces an unexpected political aspect. Set in 1976 – the year capital punishment was reinstated in the US after being suspended in 1972 – 31 has a strong political subtext that uncannily resonates in today’s current climate, with shady political oligarchs manipulating the fractured masses. Zombie’s film depicts a trio of cruel, decadent demagogues - Father Murder (Malcolm McDowell), Sister Serpent (Jane Carr) and Sister Dragon (Judy Geeson) - violently exploiting and pitting ordinary people against each other. They accomplish this by pushing a cold and clear ‘kill or be killed’ narrative and by undermining the groups’ trust in one another - and their fellow man. A number of scenes make use of a puppet theatre to suggest the idea of corrupt ‘puppet masters’ pulling the strings of their underlings to further their own ends (Zombie is many things, but subtle is not one of them!). 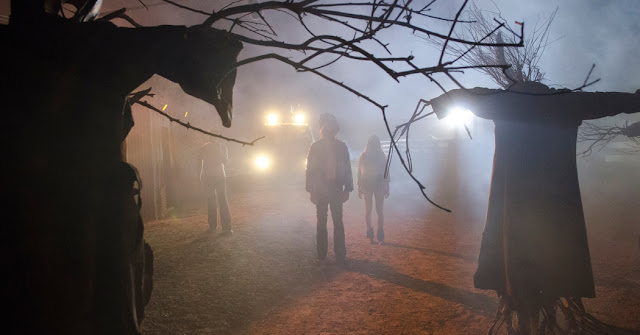 The ‘us or them’, ‘conquer or be destroyed’ narrative is muddied with ambiguous suggestions that some of the killer clowns are perhaps not acting of their own volition, but amidst the chaos and carnage, it’s hard to know what to believe because information is withheld, or is assumed to be a lie. This creates doubt and division within the group, and heightens tension for the audience.

As in so much of his film work, Zombie presents us with protagonists of a specific ilk – working class Americans of a distinctly ‘redneck’ variety. This bunch (including Sherri Moon Zombie, Meg Foster, Jeff Daniel Phillips and Kevin Jackson) are also carnival sideshow workers. The idea of carnivals as taboo spectacles of the forbidden, where people go and pay to see strange and exciting things, is not lost on Zombie, though instead of going down the ‘exploiters become the exploited’ route, he presents this (sadly rather underwritten) lot as a slightly down on their luck but completely affable rag tag family of boozy, floozy misfits. Somewhat typical of Zombie, the antagonists are also depicted as being something of a tight knit group who care for each other in their own unique ways (which adds an interesting dimension to proceedings, though this is never explored as much as it was in, for example, The Devil's Rejects [2005]). Of particular note is Doom-Head (Richard Brake), who is as terrifying as he is darkly charismatic (even philosophical), and whose introduction plays out in one of the most stark and chilling moments from Zombie’s entire oeuvre. 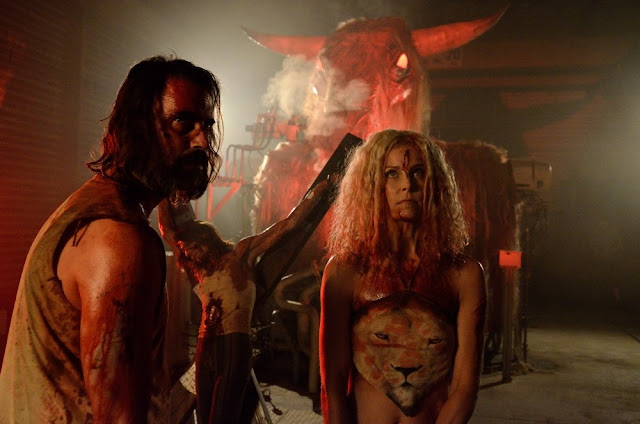 Stylistically speaking, 31 is as striking as Zombie’s other film work, its luridly lit, neon-nightmare visuals harking back to House of 1000 Corpses (2003). Early scenes set in rural backwoods areas echo imagery from The Devil’s Rejects, with parched landscapes and burnished skies. Once the group have been abducted, events play out in the highly industrialised landscape of a cavernous compound, and there’s a strong comic book influence: transitional cuts between certain scenes appear as freeze frames and moving panels, and we sometimes freeze on close-up shots of characters' bloodied faces. The violence is as graphic and intense as one would expect from the director, too.

As events lumber brutally to a full-blooded climax, and references to Hell abound, 31 emerges as one of Zombie's most taut, gruelling and outrageous outings yet.