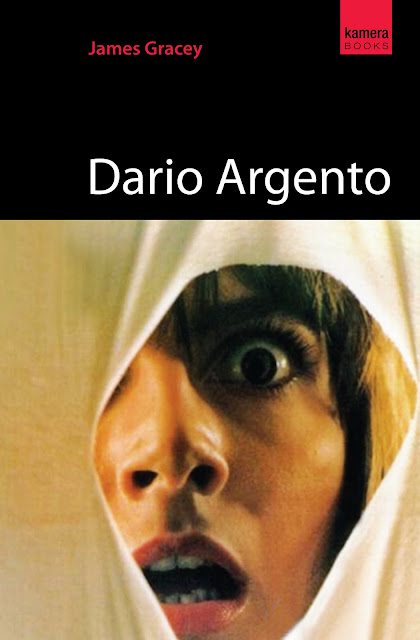 On this day, ten years ago (!), my book on the films of Dario Argento was published by Kamera Books (part of the Oldcastle Books group). I initially pitched the book at the beginning of 2008 and was commissioned to write it in March. My aim was to write an accessible introduction to Argento’s body of work – much had of course already been written about his films, but generally speaking, it was very academic (which is fine, obviously, but I wanted to bridge a gap) – and to examine each of his films and identify key themes and motifs throughout. I was able to look at everything up to Giallo (2009), the premiere of which I checked out at the Edinburgh Film Festival in June 2009. Argento's last film, to date, was Dracula 3D (2012), so it remains the only film not included.

One of the highlights of the whole experience was getting to interview Argento himself. This was arranged and facilitated by Francesca Brazzorotto, who was completing her internship with Oldcastle Books at the time. Unfortunately, it wasn’t possible to include the interview in the book (due to various reasons it took place after publication), but you can read it here.

What they said about it:
"Dismembers the director's body of work like one of his knife-wielding maniacs - and is bang up to date... A decent introduction." Jamie Russell, Total Film

"Concise, well-written and researched... worthwhile offering that will no doubt please diehard Argentophiles, as well as those just discovering his savagely beautiful work." Rue Morgue (issue 104)

"A roadmap for fans. Do yourself a favour, pick up this book, and let it guide you into the realms of an Italian Horror master." Horrornews.net

"Gracey approaches the material with energy and intelligence [...] You'll be dusting off your Dario Argento DVDs to reevaluate even the titles you didn't think you liked before." Richard Schmidt, Cinema Somnambulist

"A study that is commendably even-handed in its approach... An excellent introduction to Argento - Gracey clearly knows his stuff, and a love of all things Argento shines through on each page." Michael Mackenzie, Land of Whimsy

"It’s incredible. The amount of detail, information and analysis is astounding. Beyond that the book is a treasure trove of info." The Toxic Graveyard

"Sure to contain something new for even the most dedicated Argento fan [...] Gracey's book is the most thorough on the subject yet." Jennie Kermode, Eye for Film