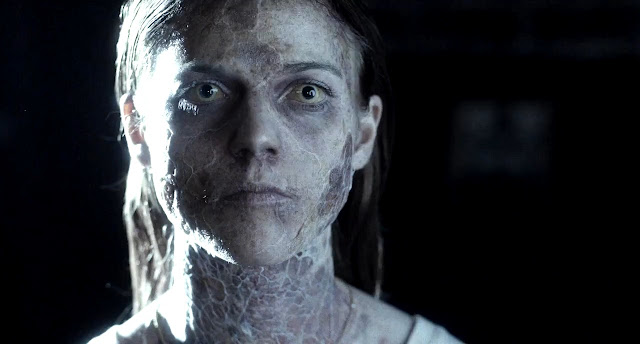 Newly married Bea and Paul (Rose Leslie and Harry Treadaway) decide to take their honeymoon at her family’s secluded lakeside cabin deep in the forest. Their bliss is shattered after Paul finds Bea wandering disorientated in the forest at night and soon after she begins to seem less and less like herself. To begin with, it’s little things, like forgetfulness, but before long, her personality changes and even her grasp of language diminishes, while she insists everything is fine. As Paul’s attempts to get them to leave and go back home become increasingly desperate, he realises that they are not as alone as they thought, and something lurks in the surrounding forest, its insidious grip on Rose becoming ever more powerful…
Directed by Leigh Janiak (who co-wrote the screenplay with Phil Graziadei), Honeymoon unfurls as a deeply haunting and suspenseful two-hander. The unsettling notion that the person you have married and chosen to spend the rest of your life with, suddenly changes and becomes someone else, is masterfully exploited by Janiak to create uneasy tension. Echoes of Invasion of the Body Snatchers abound. It’s a very relatable, human fear: to lose that bond with a loved one, to see them change and become someone else. Someone who doesn’t love you back. Janiak and Graziadei’s screenplay concentrates strongly on characterisation, and Leslie and Treadaway are immensely likeable, their intimacy well conveyed and believable due to their onscreen chemistry. Their rapport, familiarity with each other, little inside jokes and shorthand ways of communicating enable us to relate with them. In Bea’s moments of lucidity, when she seems to realise that something is happening to her, that she’s gradually losing the sense of who she is, Leslie’s performance is particularly poignant. 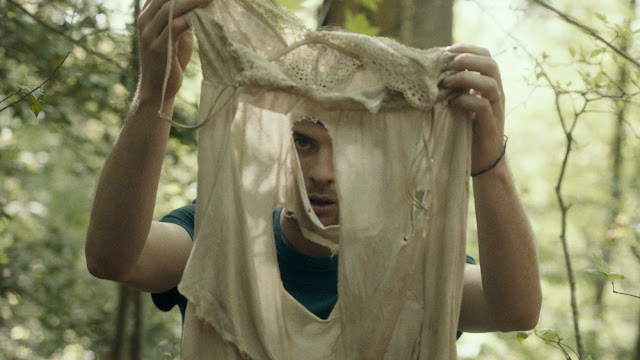 When their relationship begins to disintegrate after Paul finds Bea wandering in the woods at night, Janiak slowly, surely cranks the tension to unbearable levels. The limited locations and spaces in which the drama unfolds add to the intimacy and unease, conveying the insular world of this couple as they fragment. The initial cosiness of the cabin soon becomes claustrophobic and alienating, especially in the creepy night-time scenes. Moments when the couple appear to be observed by someone, or something, in the dark, surrounding forest are immensely creepy. Something unspeakably traumatic has happened to Bea and altered her personality and her relationship with Paul. He finds her rehearsing conversations in the mirror, formulating excuses to avoid sex. She writes down basic information about herself as though trying to remember who she is. This evokes ideas of someone afraid they will lose their identity, the essence of who they are, when they marry. The moment Paul discovers Bea’s torn nightdress in the woods has especially powerful connotations, and the story begins to parallel the painful journey of a couple torn apart by rape.
Janiak’s suggestive, atmospheric approach steadily builds towards its haunting climax, eventually unveiling shocking moments of body-horror, but her foregrounding of the main characters and their relationship ensures Honeymoon retains its powerful emotional core. Which makes that denouement all the more chilling and unforgettable.
Body Horror Leigh Janiak Possession Movie Sci-Fi