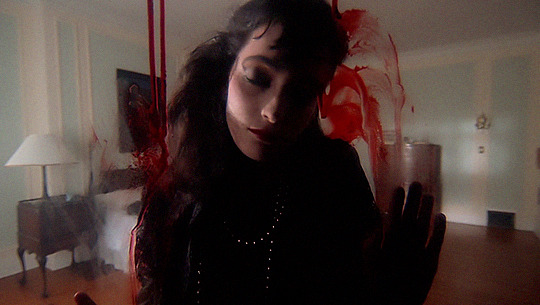 Directed by Marina Sargenti, Mirror Mirror tells of Megan (Rainbow Harvest), a high-school student who discovers the antique mirror left behind by the previous occupants of her new home harbours demonic powers and the ability to grant her wishes… with deadly consequences. With its gothy, at times very campy sensibility, the film has rightly garnered a cult following over the years. At its heart, however, is the timeless notion of an outsider trying to find her place in the world, and with its themes concerning the corrupting influence of power and the consequences of selfishness, it unravels as a dark and spooky contemporary fairy tale.
Megan (Rainbow Harvest), who bears a striking resemblance to Lydia Deetz (Winona Ryder) from Beetlejuice (1988), is a gothy outsider who despairs at her relocation from LA to small town suburbia. She can’t relate to her mother (Karen Black) and is mercilessly taunted by her classmates because of her looks and quiet demeanour. Harvest perfectly conveys Megan’s vulnerability, frustration and eventual desperation when events begin to get out of hand. She’s an unusual lead character who is by turns weak and selfish, sympathetic and resilient, but this is very much part of the film’s cult appeal and helps the audience identify with her. She can be seen as a proto-Nancy Downs (Fairuza Balk) from The Craft (1996). Indeed, The Craft shares some irresistible similarities with Mirror Mirror, from its loner high-school girl learning to harness supernatural powers for selfish gain, to a climactic showdown between two best friends in a house where a psychic storm rages. Both films explore the challenges of what it is to be an outsider, the difficulties of teenage-hood – specifically from the perspective of young women - ideas of social conformity, peer pressure, familial dysfunction and class conflict. They make a bewitching double-bill. 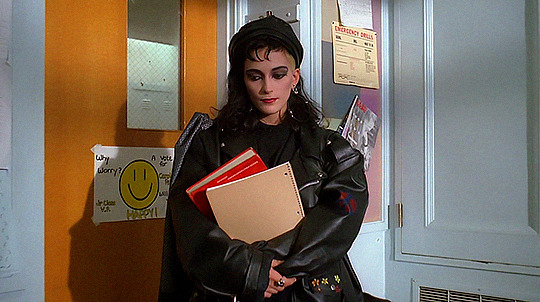 The screenplay by Annette and Gina Cascone, author and screenwriter sisters who created and wrote the YA fiction series Deadtime Stories (and the TV series based upon it), takes time to establish and explore the character of Megan and the troubled relationship she has with her mother. Several gory moments aside, the screenplay actually has the feel of a YA fiction novel, no bad thing, and hardly surprising given the screenwriters' other work. Megan emerges as a completely sympathetic character, even when she is being manipulated by the mirror, and the Cascones obviously care a great deal about her. This ensures there is tension in the later scenes when Megan has been completely corrupted by the influence of the mirror and a dark fate seems almost inevitable. As Megan’s mother Susan, Karen Black (always a commanding presence) imbues her character with a similar sympathetic edge: she’s flawed, constantly lets her daughter down and is incredibly selfish, but she is always trying to make amends and do better by Megan.
Of course, the central motif of a demonic mirror irresistibly conjures ideas regarding image, self-acceptance, self-love/loathing, and the notion that by committing certain actions, one may begin to not recognise oneself. The mainly in-camera special effects used to portray the mirror-dwelling demon are used sparingly, as Sargenti opts for a somewhat subtle, suggestive approach using weird angles, moody lighting and creepy POV shots. The moments when the camera adopts the demon’s POV, as it peers out of the mirror and into Megan’s bedroom, are among the most unsettling of the film. While the pacing and tone are a little uneven at times, the atmosphere, the performance of Rainbow Harvest, and a fun supporting cast rounded out by the likes of Yvonne De Carlo and William Sanderson, all result in a weirdly enjoyable and witchy cult oddity.
Demonic Possession Mirror Revenge Supernatural Horror Witchcraft