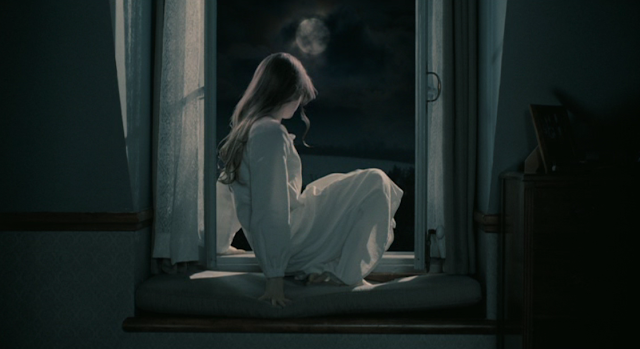 Written and directed by Mary Harron, and adapted from the YA novel by Rachel Klein, The Moth Diaries tells of Rebecca (Sarah Bolger), a teenager at an all-girls boarding school who begins to suspect that the new student, Ernessa (Lily Cole), is a vampire. Throughout, Harron re-works and updates many Gothic traditions and tropes, adding a rich depth to proceedings and evoking a suitably haunting atmosphere.
While the story can be read as an updated interpretation of Sheridan Le Fanu’s Gothic novella Carmilla (1872), Harron’s screenplay places first and foremost the ever-shifting relationships and dynamics between the group of friends. New girl Ernessa might be a vampire, but Harron doesn’t let that detract from the realigning allegiances between friends sparked by her arrival at the school. Ernessa serves as a catalyst, driving a wedge between best friends Rebecca and Lucy (Sarah Gadon). Harron’s script delves into the intensity and complexity of the friendships forged at the boarding school, ensuring characters have depth and agency. She never lets the supernatural elements overshadow other aspects of the story, such as the adversities of adolescence and the various rituals, rites and hardships of high school. The screenplay doesn’t pander, and it feels like Harron is attempting to speak directly to a younger female audience in a sincere way, as well as offering an intelligent and relatable story within the framework of a Gothic horror piece. The issues faced by the young women – sex, family trouble, peer-pressure, problems with authority, grief, friendships, basic human biology - are never trivialised. These everyday pressures, the austere regiment and insular world of the school, and the increasing ostracization of Rebecca add to the power of the story, as reality and fantasy co-mingle, sweeping the narrative along upon an atmospheric tide of adolescent anxiety. 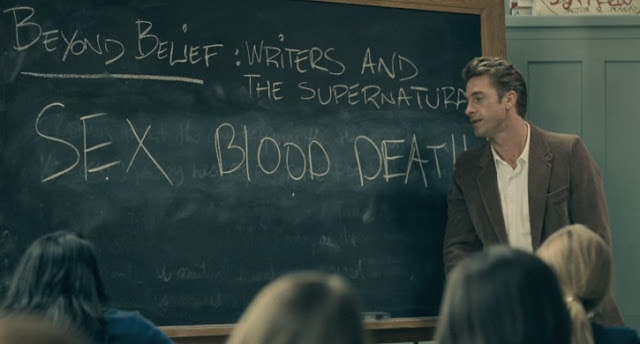 While The Moth Diaries is certainly quite tame in terms of contemporary horror content, its intensity, like all great Gothic horror, is borne from the psychological. And while Harron never shirks from exploring the jealousies and insecurities of teenage-hood, she far from neglects the Gothic horror elements of the story. The film is brimming with striking imagery – Ernessa walking somnambulantly along the roof of the school under moonlight, a glimpse of menstrual blood on a white nightgown, moths fluttering in an empty room, blood raining upon Ernessa in the library. Indeed, as Rebecca is taking a Gothic literature class, many of the film’s themes are mirrored in the books read by the students (including Carmilla), and discussed and analysed by dreamy teacher, Mr Davies (Scott Speedman), whose readings translate the themes into modern concerns. Interestingly, Mr Davies eventually begins to resemble a less otherworldly but no less dangerous predator as his interest in Rebecca becomes more apparent. His charm and handsome demeanour mask rapacious intentions. To paraphrase Lady Macbeth, he “looks like the innocent flower, but is the serpent under it.” Harron’s screenplay paints enough mystery and intrigue around many of the characters to maintain an air of ambiguity. Are the deaths of several students and staff caused by Ernessa or were they just… a series of unfortunate accidents? Is there something supernatural or otherworldly about Ernessa? Or are these accusations of vampirism against her the sad ravings of an emotionally exhausted, insecure and lonely young woman who has been ostracised from her friends because of her own jealousy?
As ever, the figure of the vampire proves it can be used as a powerful metaphor for so many things – here it parallels toxic, controlling friendships. And as with so many of the most fascinating vampires from literature and cinema, Ernessa also possesses a tragic nature and backstory which adds further layers to her character.
Adaptation Gothic Feminism Gothic Horror Gothic Literature Mary Harron Social Commentary Vampire

Spooky said…
I remember liking this one. Vampires are the gayest of supernatural creatures, which is great
27 July 2021 at 14:46