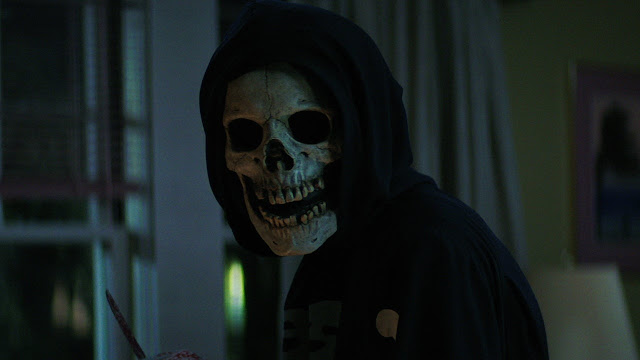 After a series of brutal murders, the lives of a group of teenaged friends are turned upside down when they discover an evil force has plagued their town for centuries. Based on the series of popular Young Adult horror novels by R.L. Stein (famed for his Goosebump series) Fear Street Part One: 1994 is the first instalment of a trilogy charting the dark, violent history of a small American town cursed to relive tragedy and horror.
Directed and co-written by Leigh Janiak, 1994 takes time to reveal itself, from its opening scene in a deserted shopping mall after dark, which suggests a straightforward slasher movie, to the gradual onset of more supernatural events. Before long there’s a whole mythology alluded to. Like its source material, it feels very much geared towards younger audiences, but older generations of horror fans will also find much to enjoy, not least the intriguing story, diverse and sympathetic characters, insanely stylish execution, and references to other horror classics. With its depiction of mundane suburbia shattered by the appearance of a masked serial killer, there are parallels with the likes of Halloween, The Town That Dreaded Sundown and Scream (which the opening kill directly homages). Elsewhere, the group of teenaged friends who must face off against an ancient evil that has been wreaking havoc in their small town for centuries, calls to mind It. 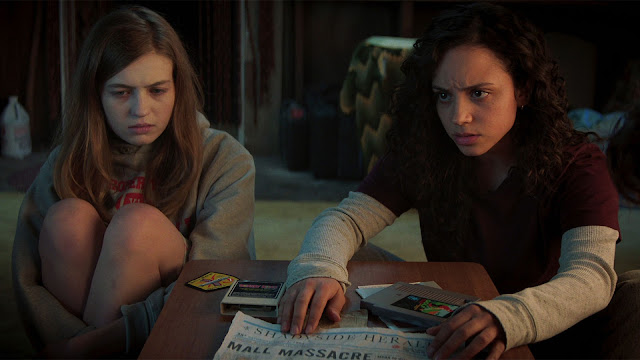 While some may find the allusions to these titles derivative, Janiak’s strong direction, sense of fun and attention to characterisation really elevate proceedings. Indeed, characterisation is foregrounded as the screenplay takes time to establish the teens. As a result, the characters feel like they have lives outside of the unfolding story, which makes for a much richer viewing experience. This is bolstered by an extremely likable and diverse cast, with positive and inclusive representation, and a Queer love story at its centre. There’s a sense of tragic inevitability and sadness that permeates the small town, with its bloody history, poverty and deprivation. The teenaged inhabitants have it tough even before the killer shows up. Parental figures are conspicuous by their absence and an uneasy, weirdly tragic sense of foreboding looms large throughout.
While the tone is ever shifting - from dread-fuelled, slow burning moments to juvenile comedy and gory violence - and the pacing is at times a little uneven, its overall sense of fun carries it through. That’s not to say there’s a sense of flippancy about it, because Janiak and her co-writer Phil Graziadei approach the material with earnestness and never condescend to their audience. While they don’t forget that the audience are here for chills and thrills, there is respect for the characters and for the source material. There are no sly nods or winks about the internal logic or more outlandish plot revelations. 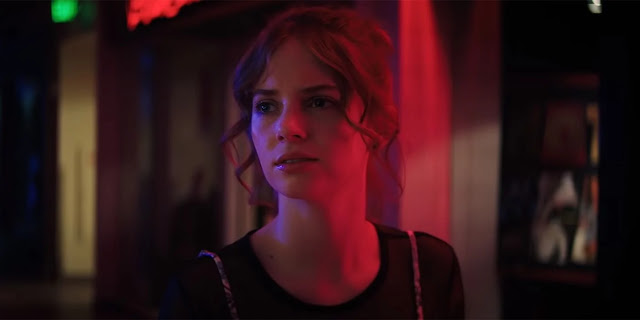 From the dimly-lit cosy interiors of the characters’ suburban homes, and the creepy neon mall after dark, to the misty forest surrounding the town, Janiak conjures a potent atmosphere and creates such a sense of place and time. This is enhanced by many loving references to the early 90s – AOL chatrooms, landlines, Jackie Collins novels, mixtapes, not to mention the killer 90s soundtrack (Garbage, Sophie B. Hawkins, Portishead, Nine Inch Nails). In her directorial feature debut Honeymoon, Janiak masterfully conveyed the sinister encroachment of the supernatural/otherworldly upon the mundane, and here she also deftly mounts tension and hints at the otherworldly lurking on the periphery of the humdrum.
1994 really sets the scene and establishes the scope of the overarching story, hinting at yet-untold backstories, and the creepy mythology surrounding the town. As Covid lockdowns have resulted in people watching films online more than they ever did before, audiences won’t have to wait long for the sequels, with each released to Netflix a week apart. This is an ambitious and commendable move by the streaming service, as horror sequels, sadly, quite often just rehash what has come before. It’s great to see such love and attention - not to mention great writing and LGBT+ representation – poured into a story purposefully intended to be told through a trilogy. And such a weird and witchy slasher trilogy, at that.
Adaptation Leigh Janiak LGBT+ Slasher Supernatural Horror Trilogy Witchcraft

Spooky said…
I was a biiiiig RL Stine fan. I even flipped through one of his books recently for nostalgia. Maybe I’ll check this one out 🙂
27 July 2021 at 14:50