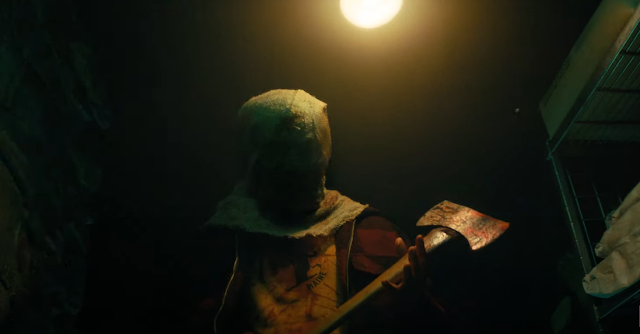 With a darker edge than its predecessor, a stronger sense of inevitable doom and a deeper dive into the witchy mythology established in the first film, Fear Street Part Two: 1978 continues the story of Shadyside’s imperilled teenagers, flashing back nearly 20 years to explore an earlier massacre brought about by the witch’s curse and how these past events might help Deena and Josh save Sam in 1994.
Fear Street was always intended to be a trilogy, and this instalment works to expand the mythology established in the first film and explore more of the backstory of various characters, notably the mysterious C. Berman (Gillian Jacobs), who back in the 70s survived an encounter with the witch and her possessed minions, and therefore offers hope to the teens in the 90s. Most of the film is a flashback to her youth when she, her sister and other Shadyside youngsters face off against an ancient evil at an isolated summer camp. Like the first film, parental figures are conspicuous by their absence. Indeed, the only adults in the film are ineffectual police and the camp’s nurse, who is all too aware of the town’s curse. This highlights the idea that the youth of Shadyside are doomed because of the actions of the generations that came before them – the sins of the fathers. The overwhelming sense that these teens have been shafted by an earlier generation takes on a more overt socio-economic aspect, as it becomes apparent their peers from the neighbouring, much more affluent Sunnyvale, are not doomed to the same fate. A sense of hopelessness arises as they, albeit grudgingly, are coming to accept that escaping the confines of their hometown is impossible, and they might very well end up living their whole lives there. The idea that your life's journey can be charted out and have such cruel limitations placed upon it, simply because of where you are born, is an unsettling but very real one, ripe with ideas regarding class, race and education. 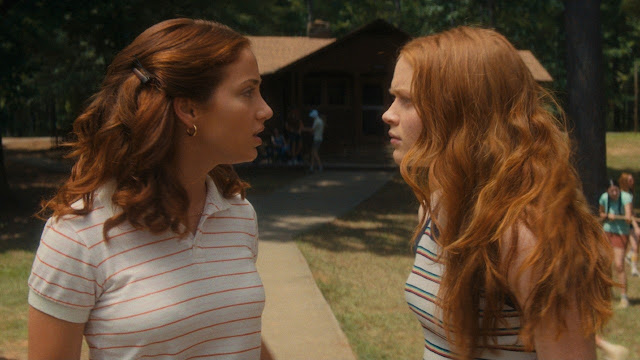 Like many slashers before it, Part Two also explores (in a much more direct and sympathetic way) the loss of innocence. There is an inherent sadness and tragedy to a lot of slashers - all those young lives brought suddenly and violently to an end, friendships torn apart, teenagers left traumatized. Yet, rarely do they ever feel sad or tragic as the emphasis is on the violence and tension, not the characters experiencing it*. By developing the characters here, director and co-writer Leigh Janiak ensures there is a strong emotional core to the film. The teens from Shadyside are already underdogs by birth-right, so when the Camp Nightwing killer (whose appearance echoes Jason from Friday the 13th Part 2 and the killer from The Town that Dreaded Sundown) strikes, there’s a sense of real tragedy too - young lives cut short before they'd even had a chance to experience life. Their dreams are as broken as the homes they come from. There is an oddly ubiquitous feeling amongst the town's youth that even if they make it to adulthood, their lives will never amount to anything – by simply being born into the town, with its weird and bloody history, they're at an automatic disadvantage. And with this story unfolding at a summer camp in the middle of the woods - isolated, far from civilization – the odds are even higher, and their sense of abandonment and helplessness even stronger. All the more the audience roots for them.
Part Two is stylistically and tonally inspired by backwoods slashers of the late seventies and early eighties, such as Friday the 13th, The Burning and Just Before Dawn. Composer Marco Beltrami’s score is also incredibly evocative of 80s slasher scores, particularly Harry Manfredini's Friday the 13th. As with the first instalment, Part Two also benefits from a great cast and a screenplay that champions characterisation. Janiak and co-writer Zak Olkewicz dive ever-more into the mythology of the town ensuring the audience are aware of the bigger picture, but without ever diminishing the smaller stories within it. The pressure is on for Part Three to deliver on the promise of this and the first instalment.
*A rare example is I Know What You Did Last Summer (1997), which offers all the chills and thrills audiences expect from a great slasher, but is also strangely poignant, its group of guilt-stricken friends (particularly the character of Helen) having all their dreams and ambitions crushed before their lives are violently taken.
Adaptation Backwoods Slasher Leigh Janiak LGBT+ Slasher Supernatural Horror Trilogy Witchcraft