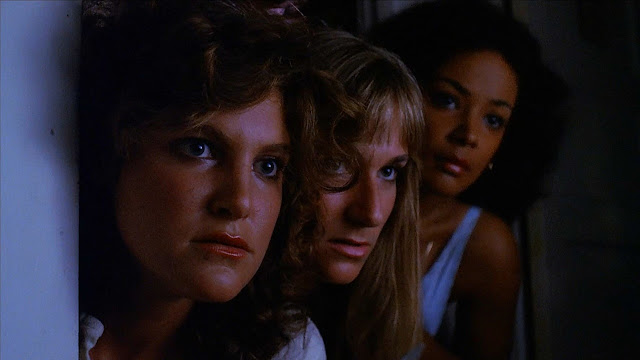 Written by feminist author Rita Mae Brown and directed by Amy Holden Jones, this fun, deceptively unconventional slasher follows a group of teenaged friends menaced by a power drill-wielding maniac during a sleepover party. On the surface, The Slumber Party Massacre is an exploitative, low-budget, trashy B-flick. However, throughout its duration, a slyly subversive edge becomes apparent. While directed completely straight by Jones, with a brisk pace and no-nonsense style, it was originally written as a parody of morally conservative slasher films. Released during the hey-day of the 1980s slasher, during which time the subgenre’s tropes and conventions had well and truly been established, Brown’s knowing screenplay adds a few wee rebellious elements to the mix by skewing the conventional use of the male gaze in slasher films, touching on social pressures experienced by young women, and generally highlighting everyday misogyny and violence against women. And it does so in a really fun, entertaining way.
Yes, the plot is as standard as they come, the characters of course are of the type you’d expect to find in a 1980s slasher (teenaged, hormonal), and there’s copious nudity and gore. However, there is a bit more characterisation with all the main female characters, who have their own interests and different personalities, and, most significantly for an 80s slasher, are all defined outside of male relationships. There’s a strong sense of friendship between the young women, so when the maniac strikes, they stick together and try to help each other. Even the banal conversations they have (as they’re unwittingly spied on by their male classmates and the killer) are focused on their interests, each other, other girls (particularly neighbour and classmate Valerie who was not invited to the party) and not just the boys they’re interested in. The attention drawn to the male gaze through Jones’ direction, and Brown’s screenplay, none-too-subtly highlights different ways in which women are the subject of invasive, unwanted male attention. Elsewhere, women characters - even the secondary ones such as the electrician at the school and the carpenter installing a door peephole at coach Rachael’s house - are presented as adept, skilful, and capable. 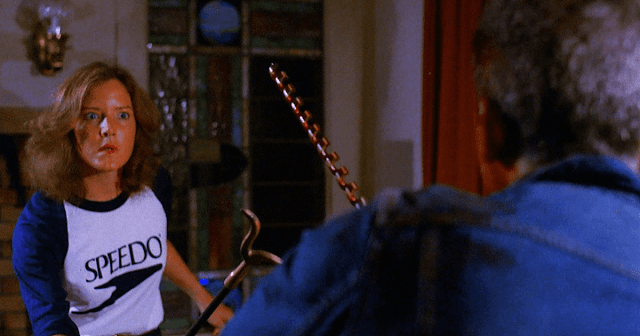 When the maniac strikes and the blood begins to flow, not one, but several characters become proactive and not only fight back, but actively pursue the killer. There’s a lot of humour alongside the tension, and use of amusing symbolism, such as the now infamous shots of the killer’s ridiculously long drill bit filmed from between his legs, and the moment it is cut in half by a machete-brandishing Valerie. Now, The Slumber Party Massacre is by no means Mary Wollstonecraft's A Vindication of the Rights of Woman, but it is a hugely fun, subversive slasher with satirical humour and a weird charm all its own.
80s slasher film Satire Slasher