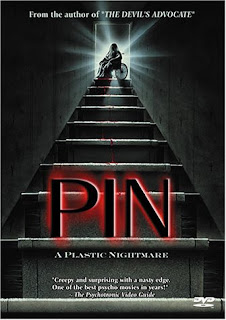 As children, Leon and Ursula Linden (David Hewlett and Cynthia Preston) are taught important life-lessons by their father’s medical dummy ‘Pin’ – as in Pinocchio - voiced by their emotionally vacant ventriloquist father (Terry O’Quinn). When their parents are killed in a car crash things take a turn for the dark'n'twisted as Leon becomes obsessed with Pin; eventually dressing the dummy in his dead father's clothes and insisting that visitors to the house meet him. Eventually Pin begins telling Leon what to do. And who to kill…

Opening with a placid, vaguely spooky piano score, and exhibiting a stately creepiness akin to those melodramatic made-for-TV thrillers we all love so much, Pin gradually unfolds as an intriguing and fascinating psychological study of a young man’s descent into madness, brought about by his stifling childhood, emotionally frigid parents and an inability to relate to anyone other than an anatomy dummy. Absurd, but also tragic and creepily unnerving, Pin will most likely not resemble anything you’ve ever seen before. 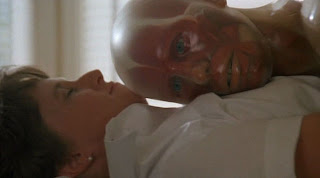 As the emotionally detached and really-quite-mad parents, Terry O’Quinn and Bronwen Mantel provide convincing performances that never veer into cheap melodrama. They ensure their perpetually simmering emotions are kept in check, just beneath boiling point, and tension comes from the possibility that they could explode into a devastating fit of rage at any moment. The early scenes which introduce us to the Linden family exude a sterile, odd atmosphere that proves quite taut. To begin with, Pin resembles a rather dark Hallmark family drama, complete with teenage pregnancy, domestic violence and child abuse. The focus of the script though remains squarely on the psychological turmoil the youngsters undergo at the hands of their parents. The mother has covered all the furniture with plastic sheets (a plastic nightmare indeed!) and she and her husband handle the children as though they were brittle dolls – no affection or warmth is shared, the relationships are all cold, clinical and sterile.

The scene where a young Leon spies on his father’s medical colleague as she uses Pin to achieve an orgasm, is decidedly uneasy and boasts a really rather high 'wtf'-factor. It charts the beginning of Leon’s obsession with the titular dummy. As the quiet and confused Leon, Hewlett provides just the right amount of restrained aggression and quiet menace. He lingers between 'overly protective older brother' and 'unsteady psychopath'. As the long-suffering sister, Cynthia Preston is likable and grounded. 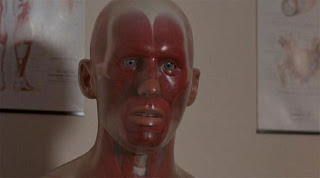 Throughout, Stern effortlessly exploits the Freudian notion of 'the uncanny' - where something can be familiar, yet totally alien at the same time, making it all feel uncomfortably strange. Like all good ‘dummies’ in horror films, Pin looks immensely creepy. The tension generated by myriad glimpses of him just sitting in a chair is highly effective. (Spoiler alert!) The scene in which the parents are killed in a car crash is also rife with slow building tension, enhanced by the shots of the dummy 'sitting up' in the back seat. After the death of the parents, an aunt with a health condition comes to stay. She dies of a heart attack when startled by Pin in a scene that manages to be quite tense, chilling and mildly ridiculous all at once. Just like the film itself! In a moment reminiscent of Dario Argento’s Tenebrae, Pin rises up from behind the bed where the dead aunt lies, only for Leon to then rise up from behind him creating the impression that he is emerging from within the doll, shedding it like skin.

While the premise of co-habiting siblings whose relationship is slowly deteriorating recalls Whatever Happened to Baby Jane?, Pin never traverses that far into parody or camp, though it is not without its moments of black comedy and absurdity. One moment that destroys the uneasy tension* is a brief and incredibly cheesy montage of Leon and Pin ‘hanging out’ as their friendship blossoms. When Leon and Marsha (Helene Udy) get back to his house after an awkward date, the lights go off and Pin menaces her in the dark in a moment that proves as ridiculous as it is creepy. Locked in the house, Marsha becomes increasingly panicked and is chased around in the dark from room to room by Pin in a wheelchair. Why she doesn’t just go upstairs is anyone’s guess. In a cheeky reference to Canadian genre cinema, the film they watched in the cinema was Scanners. 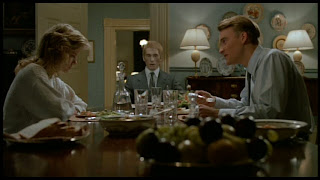 The gathering psychosis at the dark and twisted heart of this dysfunctional family is perfectly demonstrated in the scene where Leon insists upon reading some poetry after dinner. Gathered around the fire, Ursula and her date Stan (John Pyper-Ferguson) listen with increasing concern and horror as Leon recites one of his recent poems – a revelatory meditation on rape and incest. This is one unconventional household! The ending, as foreshadowed in the opening scene, is (shock horror) a tad ludicrous, but if you’ve invested in the story, it should be curiously effective. Pin is a disturbing, blackly humorous and unconventional psycho-drama with lashings of creepy atmosphere and some pretty decent characterisation.

*or proves this is the best film ever made: you decide.
Dysfunctional Family Eighties Horror Family Horror Medical Dummy Psychological Horror Terry O'Quinn

Franco Macabro said…
Sounds like an interesting watch, I remember the film from when I was a kid, Id see the box at the video store but it was a film I never got around to renting. I always walked right past it. But now, it sounds like a movie Id like to watch, thanks for that review!
18 February 2010 at 16:44

Anonymous said…
Lord knows, I hated this film. But the ending was (at least in my opinion) rather moving. If the rest was more like the last few minutes, I wouldn't be so hard on it.
18 February 2010 at 17:03

James Gracey said…
Connoisseur - It is worth checking out - such an odd little film with enough twists and blackly comic moments to maintain your interest.

David - Yeah, I agree - it was strangely moving. I think Pin really benefits from decent, effectively restrained performances that help build up a fair amount of pathos. Leon is quite the tragic figure.
18 February 2010 at 20:30

Shaun Anderson [The Celluloid Highway] said…
This is a blast from my video rental past - remember having this little chiller rented for me by parents when I was about 12, and it remains lucidly remembered. I remember seeing this, "Society", "Anguish" and "The Gate" in rapid succession. I feel all nostalgic now.
19 February 2010 at 16:00

I Like Horror Movies said…
I learned of this one from the 101 Best Horror Movies Youve Never Seen, and I was pleasantly surprised! It is just a weird, quirky film that is quite unique and enjoyable. Great review as always James!
23 February 2010 at 06:04

Guillaume said…
I agree that the ending is striking,the fate of Leon is really sad and disturbing,but somewhat logical.
The film works rather effectively as a psychological drama,thanks to the fine performances and writing...overall an underrated little gem.
Have you ever read the book/novel?
I don't know if it's good,if the film is faithful to the novel,i'll be curious to read it..
23 February 2010 at 20:46

James Gracey said…
Shaun - glad to have provoked such nostalgia!

Carl - This was indeed weird, quirky, unique and utterly enjoyable. Despite the potential for ridiculousness - I was inclined to take it all quite seriously (mostly!), no doubt thanks to the spot on performances.