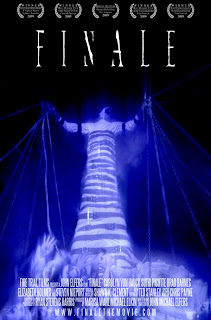 A family is torn apart by the death of the oldest son - who seemingly took his own life. Helen (Carolyn Hauck) is convinced that her son was the victim of a bizarre satanic cult. Her investigation not only threatens to tear her family apart, but also her own sanity. As she begins to descend into a dark world of paranoia, death and despair, she is stalked by a demonic, mirror-dwelling figure…

Finale is a film positively saturated in a dark and rich gothic atmosphere, seeping with dread and anxiety. Director John Michael Elfers has a keen eye and a knack for startling visuals, and he imbues his film with the look and feel of lurid supernaturally tinged Italian horror flicks from the Seventies. At times his camera is possessed by exactly the same creativity and panache that haunted the early work of Raimi, Argento and Jackson. Finale at times not only recalls the lurid atmospherics of Bava and Argento, particularly the latter’s Mother of Tears; with its scenes soaked in carnal sexuality, forbidden desire and laced with sado-erotic imagery, but it also manages to weave together a thoroughly gripping and moving story that should draw the viewer into this weird and warped world of high school cults, murder cover-ups and familial anxieties. 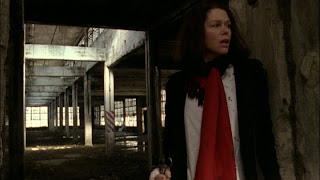 The core of the story is the heartbreak and denial suffered by a family as they attempt to understand and come to terms with the alleged suicide of their eldest son, Sean (Warren Bryson). They each have different ways of dealing with the tragedy – brother Charlie (Geoff Burkman) buries himself in his college studies, father Peter (James Johnson) throws himself into his work – and isn’t adverse to knocking back the odd glass of scotch or two of an evening, while sister Kathryn (Suthi Picotte) attempts to fit in more at school. So much so in fact, she joins her brother’s former drama class. Where all is not as it seems… Sean’s mother Helen finds that she is unable to accept that her son took his own life, and as she begins the painful task of sorting through his belongings, she finds some seriously disturbing truths about her son – particularly in the contents of his diary. Her son was caught up in serious trouble - otherworldly trouble. The splashes of black paint that polluted the various reflective surfaces of his house gradually make their way into Helen’s house, as she believes the demon responsible for his death, is now hounding her, bringing with it the insanity that their son apparently suffered and causing her family to worry about her mental health. 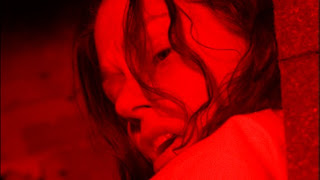 Finale is liberally spattered with striking and disturbing imagery, particularly a number of dream sequences that are as unnerving as they are strangely alluring and darkly erotic. Helen walks in her sleep and as she does so, she dreams. When she enters her son’s house for the first time after his death to collect his possessions, she does so in her dreams; in doing this the fragile lines between reality and nightmares, sanity and madness that become ever thinner throughout the course of this dark tale, are vividly highlighted. Helen emerges from a wrecked car deep in the woods, and wanders through a strange and haunting landscape, with shadows flitting around her and a long shawl billowing out behind her. The bathed-in-red scenes featuring the bizarre cult rituals are also doused with a lurid and morbid sensuality and the highly creepy demonic figure that flits between mirrors is really a sinister sight to behold; resembling some pale, straight-jacketed monstrosity with a bevy of helpless victims writhing at its feet. These are but a couple of the many astounding, psychotically lit images Elfers conjures throughout the story. Effective use is also made of the various locations - mainly Sean’s ramshackle Victorian house in the woods and a nearby collection of abandoned industrial buildings beside a cemetery. 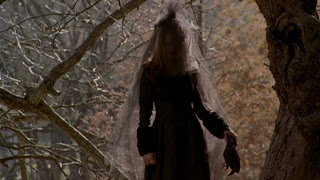 The performances are uniformly strong, particularly those of Carolyn Hauck as Helen and Suthi Picotte as Kathryn. Though Helen is a desperate woman, and her family’s gradual suspicions that she is uffering a breakdown make for involving drama, thanks to Hauck’s performance and conviction, she is still a strong character. Finale is an extremely taut and well crafted story that is finely tuned and orchestrated as it races towards a richly satisfying and suspenseful climax. Strong visuals and tight editing aside, it is also successful in telling an enthralling story and creating characters we care about.

The denouement, when it comes, it utterly devastating in its impact and while a few stones are left unturned, it doesn’t detract from the overall effectiveness. John Michael Elfers is a name to keep an eye out for. He is a highly imaginative and passionate filmmaker.