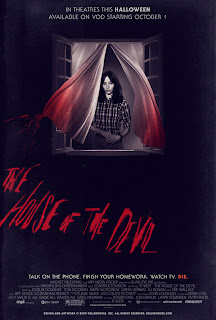 In order to obtain the money she needs for a down payment on a new apartment, cash-strapped college student Samantha (Jocelin Donahue) takes on a babysitting job in a remote mansion. However when Samantha is taken to the house by her friend Megan (Greta Gerwig), she is informed by the resident odd couple, Mr. and Mrs. Ulman (Tom Noonan and Mary Woronov), that they do not have any children, and it will be Mr Ulman’s elderly mother she’ll be looking after while they are out to view a full lunar eclipse. It isn't long before Samantha realizes that something isn’t right in the house and as the lunar eclipse darkens the night sky, Samantha realises to her horror that the Ulman’s have diabolical plans for her… Can she survive the night? Will she escape with her soul intact?

With titles such as The Roost and Trigger Man, director Ti West has been making a name for himself on the horror circuit as a force to be reckoned with. Deftly utilising minuscule budgets and exhibiting a real penchant for creating creepy atmospheres and effectively wrought suspense, while defying expectations and avoiding the pitfalls of so many other low-budget horror film directors, West is obviously a deep admirer of horror cinema who knows how to induce chills in his audience. With The House of the Devil, the director has returned to the old school roots that many great horror movies are entrenched in and that he obviously adores. 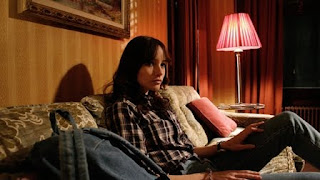 Combining elements of the haunted house movie with those of satanic cult and exploitation movies, West has fashioned a taut and anxiety-ridden film that starts slowly and builds to a nauseating and suspenseful denouement. In the grand tradition of Bava, Polanski, Hitchcock, Lewton and Hammer Horror, The House of the Devil successfully depicts insidiously creepy events that encroach on everyday situations and people, altering their lives and darkening their minds forever.

Set in the Eighties and shot on 16mm film, this film is simply steeped in a retro sheen that effortlessly evokes a grainy and earnest nostalgia. Indeed, we open with the statement that ‘During the 1980s, over 70% of American adults believed in the existence of abusive Satanic Cults’, which automatically sets the tone for the unbearably dark events to come. West not only manages to evoke old ’80s horror movies throughout, but because he also plays it straight, the result is a movie that is as effective as it is a loving homage to a bygone era of straight-to-video horror. Though it is a new film, The House of the Devil still feels like some old unearthed cult classic. 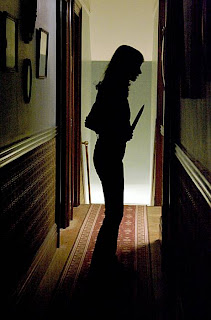 The cinematography, courtesy of Eliot Rockett also reflects the time in which the lurid story unfolds, deploying various techniques used by filmmakers of the time, such as zoom shots and the freeze frames of the opening credits. From the costumes to the hairstyles, to the music, title sequences and the use of props such as a Sony Walkman, we are immediately transported back to a bygone era that produced some of the most memorable horror movies of all time. Unlike other recent films that have delved into bygone years for inspiration in an attempt to create something fresh and interesting however, this film does not use satire or irony, but plays it straight in order to be as true as possible to the style of that particular decade's horror films. Everything feels authentic, and events never descend into Kevin Williamson-style self-conscious nudge-winkery.

From the moment Samantha arrives at the house we just know something is off. Noonan’s odd behaviour and quiet menace ensure proceedings begin their slow build into tightly coiled tension almost immediately. The comfortable domestic setting takes on an eerie atmosphere as soon as she is left alone. The bulk of the film features Samantha wandering around the house and exploring the various dark rooms as the increasingly overwhelming feeling of foreboding unease becomes unbearable. To try and lighten the too-quiet mood within the house, she watches a bit of telly. Orders pizza. And dances through a wonderful full-on Eighties-inspired montage. As the audience, we are made aware of the contents of the room Samantha is instructed never to enter. It is a simple shot, but the mood and tension it immediately creates ripples through the rest of the film and really works at increasing the knots in one’s stomach. The quiet menace and eerie silence of the mid-section of the film gradually bleeds into abrupt violence and full on brutality, but thanks to West's assured, unfussy direction, it never feels forced. 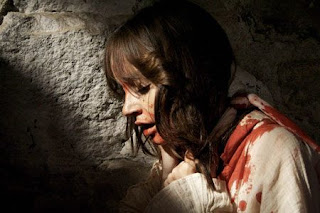 West adopts the slow-burn approach and cranks the tension up throughout the first two acts, before letting rip with the frenzied and bloodied climax. The director is careful to ensure that we spend time with Samantha so an attachment is formed. Donahue exudes an instant likeability and the rapport between her and Gerwig in early scenes feels genuine. The chilling climax also exhibits a strange poignancy.

The House of the Devil is a lean and taut exercise in building atmosphere, creating tension and eliciting stone-cold chills. West knows that the power of horror comes from the anticipation of the payoff, not necessarily the payoff itself. West’s approach to horror – revisiting the aesthetics and sensibilities of old-school slasher movies and satanic cult anxieties - proves a refreshing one and The House of the Devil unwinds as a startling, suspenseful and deeply effective little chiller.
Astrology Babysitter Devil Eighties Homage Horror Film Satanic Cult Satanic Panic Ti West

Matt-suzaka said…
Great review, James. I just recently and finally watched this one myself and to say I loved it (for many of the reasons you mentioned) would be an understatement. It pretty rare that a film gives me the willies, but The House of the Devil sure did and that had a lot to do with the incredible tension built. Great film and one to cherish, I think.
20 April 2010 at 05:30

deadlydolls said…
I'd echo you and Matt. Such an effective little film that really got me. Ti West is definitely the new chosen one of horror.
20 April 2010 at 12:40

Anonymous said…
This really hit the nail on the head. I loved this movie. It was easily 1 of the top 5 films of last year for me. So effective and insanely intense. It renewed my faith in original horror.
Fabulous review!
23 April 2010 at 06:01

Will Errickson said…
The only thing I really disliked about the movie was the dude in the beard; rather than looking like a time-period appropriate sorta-hippy-drifter, he simply looked like a bearded indie rocker from Williamsburg. Otherwise the tension in this movie was wonderfully unbearable, with one of the great shock scenes in recent memory. Also, I'm glad I didn't read the Netflix sleeve or see a trailer for it b/c I had no idea what the movie was about. It's rare that happens anymore.
23 April 2010 at 16:12

I Like Horror Movies said…
Ive been looking forward to your thoughts on this one James, very glad to see that you appreciated it for the same reasons I did! The only thing I did not enjoy as much was the ending, which I truly felt would have benefited from the same less is more approach
24 April 2010 at 17:12

James Gracey said…
I know where you are coming from Carl, though I think the ending as it is proved a wonderful release of all that tension and foreboding! Let the blood run free as they say. And Ti West did. ;o)
25 April 2010 at 12:00