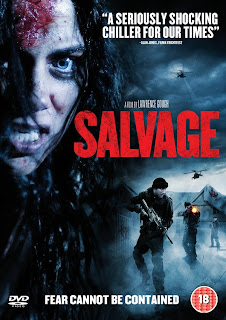 A quiet cul-de-sac is suddenly plunged into a world of violence, terror and paranoia when a group of heavily armed military personnel storms the area, sealing off the close and ordering the residents at gunpoint to retreat inside their homes. This coincides with the discovery of a mysterious container washed ashore nearby. Unsure if this is the first sign of a terrorist attack, or something worse, one local resident, Beth (Neve Mcintosh), mounts increasingly desperate attempts to save her estranged daughter, Jodie (Linzey Cocker), who is visiting her for the holiday but is now stranded across the street in a neighbour’s house. With growing dread, the trapped residents soon discover that the imminent threat is far more monstrous than any of them could possibly imagine.
Whatever was in the container has reached the housing estate, and it is seriously depleting the numbers of the military unit and residents alike…

Salvage is a taut, tightly constructed and relentless thriller. The central premise bursts with potential drama and intrigue and shares a grand tradition with the likes of ‘siege’ movies by John Carpenter and George Romero. The formula that places a small group of people in a limited location, threatened by forces unknown from outside has proved a successful one, time and time again. The suburban setting easily recalls the likes of Right at your Door, and like that film, most of the ensuing action takes place in limited locations, namely a couple of the houses nestled in the quiet, leafy street (actually the former set of British soap-opera Brookside). Elements of 28 Days Later, Night of the Living Dead and even The Host are thrown into the mix with mainly successful results. 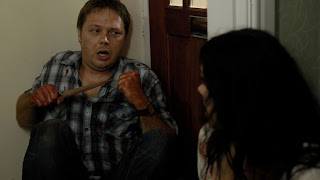 After we are briefly introduced to the various characters such as sulky teen Jodie, her estranged mother Beth, Beth’s one night stand Kieran (Shaun Dooley), and various other neighbours, and all of their dramas and dynamics have been established, the stage is set. The suddenness and brutality of events after this is really quite breathtaking and once the SWAT teams descend on the quiet cul-du-sac, tension really begins to mount. Gough deftly builds and sustains intrigue and suspense, showing us nothing, but suggesting so much. We are privy only to what Beth and Kieran can see from the net-curtained windows of her house, which adds an element of claustrophobia to proceedings. Flashes of gunfire and bloodied neighbours dying in the street are glimpsed and the panic and pandemonium that breaks out is effectively realised; heightened by the blunt manner in which the military deal with the situation ordering everyone back inside their homes with force - adds to the worrying nausea generated. 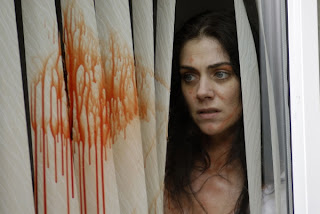 Is it a contagious viral outbreak? A terrorist attack? Chemical warfare? The dead returning to life? Gough automatically generates a myriad of questions and concerns. We are kept in the dark about the cause of the quarantine as much as the characters and the sense of cosy domesticity being invaded by something terrible really proves effective. Adding to the panic is a brief news report glimpsed on TV - before a power cut - regarding the mysterious container washed up on a nearby shore. Just what was inside? When it is revealed what was inside, the film performs an unprecedented twist that will have your jaw on the floor. Gough even finds time to work a little relevant social commentary into the mix when the increasingly paranoid Kieran suspects that Beth’s neighbours are members of a terrorist organisation, exclaiming ‘They're all suicide bombers, them!’ Tension is generated further when Beth and Kieran sneak into their neighbours house via the adjoining attic only to discover a bloodbath… 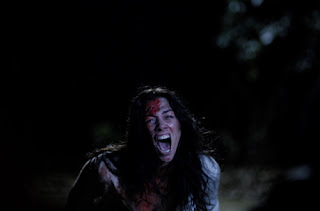 As Beth, Neve McIntosh delivers a blistering performance, her kick-ass determination recalling the likes of Ripley in Aliens. She wouldn’t have been out of place on that pot-holing expedition in The Descent either. Many of the characters aren’t really given enough of a chance to develop before they are nastily despatched, and with such a premise and basic cast as the one featured, so much more drama, tension and impact could have been sustained had there been any sort of connection, other than a basic human one, between audience and characters. Events do plunge into ill-structured confusion on occasion, and some tension is dispelled by too much time spent following characters who blindly run/wander/hide in the street. Director Gough’s direction is mainly tight and efficient and as the story unfolds, the pace builds ever quicker to unnerving speed before the breaks are slammed on ensuring fatal impact with a rather dark and upsetting conclusion.

While Salvage is certainly nothing new, and not without its flaws, it still proves to be a highly effective and tightly paced thriller.
British Horror Brookside Monster Movie Salvage Siege Movie Suburban Horror

Anonymous said…
Sounds interesting enough. Great review. I like these types of films and will definitely check it out.
22 April 2010 at 00:16

James Gracey said…
Cheers Simon. Thanks for dropping by. I see by your banner you like Irish zombie rom-coms. Rock!