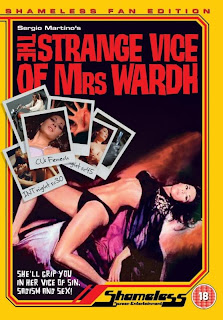 The arrival in Vienna of international diplomat Neil Wardh and his wife Julie, coincides with a spate of vicious murders. In her husband’s increasing absence, Julie finds herself the (mainly) unwilling recipient of attention from her sadomasochistic ex, Jean and her latest suitor, George. As the killer continues to wreck havoc, and Julie's affair with George becomes more torrid, it becomes apparent that the victims are all connected to her and she begins to suspect each of the men in her life of being the sadistic maniac… Can she work out who it is before it’s too late?

During the early seventies, just after Dario Argento’s dazzling and justly influential The Bird with the Crystal Plumage sparked a trailblazing trend, director Sergio Martino made several giallo films back to back which would come to represent several of the genre’s most evocative and archetypal entries. Giallo (plural: gialli) is Italian for ‘yellow’ and the name originates from the trademark yellow covers of pulp crime-thriller books that were extremely popular in Italy. Their cinematic equivalents featured titillating scenes of sex and violence in an often blinding amalgamation of exploitation grit and art-house chic. The Strange Vice of Mrs Wardh was Martino’s first foray into the dizzily stylish genre and despite the fact that the director is criminally underrated - due in part to the fact that he dabbled in so many different genres, including westerns, sci-fi and comedies – the film stands as one of the finest and most exemplary gialli ever made.

The title itself is a riff on the 1946 noir The Strange Love of Martha Ivers, a film thigh deep in its conveyance of the affinity of sex and death; a common trait of most gialli. The various locations which provide the chic backdrop for the story – Vienna and Spain - lend the film a distinctly international flavour and jet-set feel. Bucking the trend of setting and filming gialli in Italy, Martino imbues his already ravishing film with an exotic and heady atmosphere, particularly when events move to Spain. Memories of Mario Bava’s groundbreaking The Girl Who Knew Too Much are also evoked from the get-go with the introduction of the exquisite Julie Wardh (Edwige Fenech) descending an escalator in an airport.

Martino and cinematographers Emilio Foriscot and Floriano Trenker have created an alluring looking film peppered with strikingly framed and seductive shots – most notably the dream sequences and flashbacks revealing the protagonist's titular vice - she is equally repelled and aroused by the sight of blood. Julie and her former lover Jean (Ivan Rassimov - Torso) are shown in darkness, locked in an unsettling tryst as he slaps her and showers her in broken glass. Filmed in delicious slow-motion, these erotically charged moments really fuse the film with an intoxicating malaise, as does Nora Orlandi’s sensual and eerie score. Other flashbacks of their abusive relationship feature the two writhing around in slow-motion in torrential rain in a wood. Compelling POV shots and sharp editing also adds to the intriguing blend of old fashioned sexual politics, misogynistic leanings, red herrings, sadistic killers decked out in black leather gloves, glinting switchblades, psycho-sexual deviancy, kitsch Seventies décor and Edwige Fenech’s sultry beauty and tremulous glances.

The film’s central mystery eventually builds to a twist, which when revealed, is genuinely surprising and should prompt viewers to rethink certain events previously played out. It pays homage to a particular Hitchcock thriller. Various set pieces dominate proceedings, such as Carol’s murder in the park during a rose-tinted sunset – which echoes a similar scene in the Jacques Tourneur directed/Val Lewton produced The Leopard Man, and would be revisited in Dario Argento’s Four Flies on Grey Velvet. Martino’s pacing is quite uneven though, and when he isn’t creating astoundingly beautiful and oddly unnerving flashbacks, or staging wonderfully orchestrated scenes of violence and carnage, the story saunters along at a too leisurely pace, occasionally veering into exposition-heavy scenes that weigh down the thrust of the narrative. As the story progresses however, Martino cranks the tension ever higher until the fizzling, suspense-ridden denouement with its plethora of revelations, perverse twists and ingenious use of an ice-cube and the sound of a heartbeat.

While Martino’s gialli may lack the complexity or subtextuality of the likes of Argento’s masterful works, they are still shining examples of the genre that remain as entertaining, imperative and stylish as they ever were. As well as the dazzling array of style, intriguing mystery and suspense, The Strange Vice of Mrs Wardh also benefits from the irresistible triptych of Edwige Fenech, Ivan Rassimov and George Hilton together for the first time. The three would become synonymous with the genre and go on to star together again in several other titles, including Martino’s second excursion into the genre, the beautifully titled All the Colours of the Dark.

The Strange Vice of Mrs Wardh was released on DVD (£15.99) by Shameless Screen Entertainment on 28 March 2011. 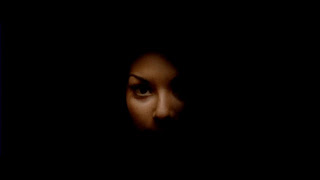 *The title of this interview was taken from an article I wrote about Martino. Exciting stuff, eh!? The article can be read here. Aside from a couple of minor typos in the subtitles, this unfussy special feature is top drawer stuff! It sheds much welcome light on the work of Martino - a vastly under-appreciated director. Insightful, probing and jam-packed with juicy information, titbits and exclusive anecdotes, the interview showcases a razor-sharp and candid Martino, interspersed with clips and stills from his work – particularly his luminous gialli.
Edwige Fenech George Hilton Giallo Ivan Rassimov Mrs Wardh Sergio Martino Strange Vice Thrills Chills and Cleavage

Aaron said…
Great review, James! Martino has always been hit or miss with me. As far as his gialli, I love this and YOUR VICE IS A LOCKED ROOM, but I dislike TORSO quite a bit and wasn't too impressed with ALL THE COLORS OF THE DARK back when I saw it (although I respect the latter from a technical standpoint). STRANGE VICE in particular is just a gorgeous film from beginning to end, and Nora Orlandi's score is one of my favorites of the genre (even though it's basically variations of the same two songs).

Also, that's pretty amazing that you're quote got used for the DVD. Speaking of which, it looks like Shameless put together a great and much needed release for this classic. I wish a company in the U.S. would do the same! It's been OOP here for a while and a the remaining brand new copies in existence are a bit pricey.
21 April 2011 at 12:29

James Gracey said…
Cheers Aaron! I LOVED Mrs Wardh. I came to Martino's gialli quite late on, but absolutely adore them- particularly Your Vice and, unlike you, Torso - which is just the genre boiled down to its most base ingredients. The last half an hour is hand over mouth, edge of the seat, pure suspense!
I was bowled over when Shameless asked to use the line from my article! It’s a fantastic label that really cares about these films and their fans – the interview with Martino is top stuff! :)
21 April 2011 at 21:41