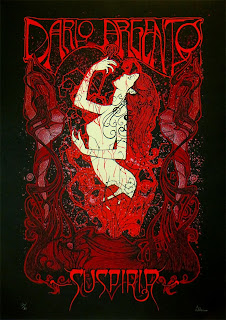 Last month I went to see a very special screening of Dario Argento’s nightmarish, witch-infested classic, Suspiria, in Belfast’s Waterfront Hall. The screening, courtesy of those cool cats at the Belfast Film Festival, was accompanied by a live score performed by none other than original Goblin member and long time Argento collaborator, Claudio Simonetti, and his band, the Simonetti Horror project.

Argento’s classic tells the terrifying tale of an American ballet student who enrols at an exclusive dance academy in Germany, only to discover - after several vicious murders and assorted weirdness - much to her horror, that behind the scenes lurks a witches' coven. Often hailed as Argento’s masterpiece, Suspiria is an overwhelming onslaught of vision, sound and colour. The director mercilessly bombards the audience with scenes of graphic violence, fantastical lighting, overwrought production design and an immensely atmospheric soundtrack courtesy of Italo prog-rockers Goblin.

I have seen Suspiria countless times before, but found this viewing in particular, with its live soundtrack, to be incredibly intense. Interestingly, I also noticed something I had never seen before (isn’t it magical when that happens?) despite having seen Suspiria many times. Perhaps the copy screened at this event had been re-mastered or had been transferred from a different print, or, maybe it was just seeing Suspiria on a big screen; whatever the reason, I was afforded a glimpse of something I’d never seen before. During the scene when Sara - after desperately trying to awaken a heavily drugged and sleeping Suzy - is stalked through the lividly lit hallways and labyrinthine attic spaces of the school, and attacked by a shadowy figure brandishing a cut-throat razor. During previous viewings, her attacker is always too enshrouded in shadows to see clearly, but this time, there he was. And damn it all if the sight of him didn’t send icy chills down my spine. When I came home, I popped my own copy of the film into my computer and found the stalking scene. Pausing it, replaying it and fiddling around with the brightness and contrast revealed that sure enough, there is a dark figure standing stock still behind Sara in the hallway - it has the same cat-like eyes we glimpsed earlier in the film as poor Pat peers through the bathroom window, moments before being attacked, and sees something with cat’s eyes peering right back at her... 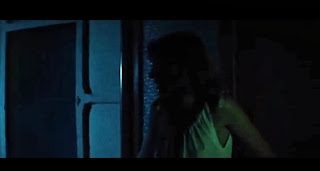 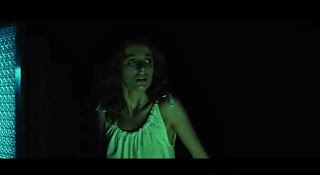 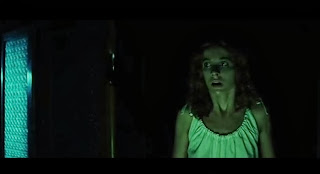 The same stills with the brightness and contrast altered slightly to reveal just what attacks Sara... 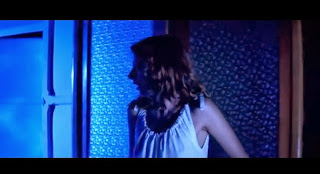 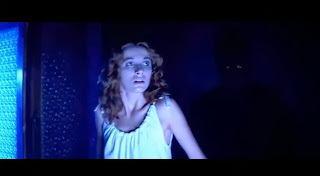 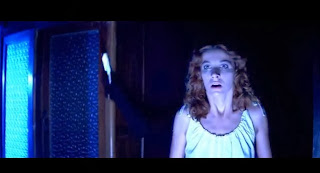 Is this just me? Has anyone else noticed this before? The way the figure just stands behind her, watching, waiting, is incredibly effective and adds to the supernatural aspects of the tale. Similarly creepy, only-ever-glimpsed figures stalk through Argento’s Three Mothers films. In Inferno, another unfortunate named Sara is stalked through the basement of the library by a sinister hooded figure, and when Giselle is attacked in the museum in Mother of Tears, her killers are only briefly seen; hideously grotesque and most definitely not human. While Suspiria is as far from subtle as can be, catching sight of this witch's minion, standing, waiting, plotting bloodiness behind Sara as she tiptoes down the hallway, was a creepy delight and has only reinvigorated my love for Suspiria. Its presence is a subtle one, (so subtle I had never noticed it before!) but made all the more powerful because of its stealthy unveiling.
Dario Argento Gothic Horror Italian Horror Seventies Horror Something I've Never Noticed Before Supernatural Horror Suspiria Witchcraft

DrunkethWizerd said…
I've seen Suspiria in the cinema once. It was a non-US, slightly cut version of the film and it looked a little different than I was used to, both in print, colors, editing (obviously) and seeing it rolling on film with a huge screen.

The 3 Disc AB version of Suspiria was the second ever DVD I bought (my first was Lucio Fulci's The Beyond tin edition) and when I saw this version I did notice a lot of weird shit in the background that I hadn't before. There's a LOT of stuff going on in the background dude. More than just this. But your post makes me remember this part in particular.

If anything, Suspiria is a film loaded with secrets and quick flashes of demonic, haunting figures. Much like a lot of Dario's other work as you obviously know. Seeing this film in a cinema is such a great treat though, and I feel very fortunate to have done so.
30 September 2013 at 00:41

Aylmer said…
No you aren't the only one. I've never noticed him either. That's creepy as hell - he was just hiding there all along. Very appropriate given the deeply occult vibe of the whole movie. Also that art deco poster at top is absolutely gorgeous. Do you have any info about it, or who the artist is? It's so beautiful I may have to re-post it over at the Eye (that is if you don't mind James).
30 September 2013 at 14:38

James Gracey said…
@Aylmer Glad I'm not the only one! He was indeed just standing there all along. Creepy. As. Hell.

It is indeed beautiful artwork, isn't it?? You can view more by the same artist here - http://www.darkcitygallery.com/Suspiria_p/dav09.htm

I treated myself to a Bird with the Crystal Plumage print a while back. I keep eyeing up Tenebrae and Inferno, though...

@Scott - I also want to re-watch again. I hope there are other creepy treasures previously unglimpsed!

@Drunketh - Maybe it was just seeing it on the big screen - though the print seemed brighter than my own copy - that helped reveal this diabolical sentry. I love the idea that there are things unseen skulking in the shadows of this otherwise lividly lit nightmare.
30 September 2013 at 19:46

James Robert Moore said…
I was at the Belfast Suspiria screening, and the very same scene you are writing about here struck me too. That figure really stood out, was a real shock seeing it and I've never noticed it before in any other print over the years.

There were a myraid of tiny background details I'd never noticed before throughout the film. A very rewarding wiewing. And the live soundtrack was absolutely fantastic.
3 October 2013 at 22:18

James Gracey said…
Agreed, James: it was such a great night, and very rewarding. I too noticed a few little details I'd not seen before - I'm now convinced this was due to seeing the film on a big screen. Suspiria should only ever be watched on a big screen.

Terence said…
Those yellow eyes are a lot creepier in this scene compared to the opening murder!

I'm not very fond of Suspiria's HD restoration. It feels like they severely jacked up the contrast causing the film to burn my retinas. The most notable scene is the meeting between Suzy and Madame Blanc as well as the scene in Olga's apartment. I do hope they revisit the original negative and do a restoration worthy of Argento's crown jewel.

Phenomena's remaster is not as bad but still rather underwhelming IMO. It looks like they tried to combine the 'orange' aesthetic of the Italian version with the 'blue' aesthetic of the International version resulting in a muddy grey look but it seems like Argento's happy with it.
12 October 2013 at 12:07

Sister Wendy Beckett said…
I always knew that something scared the living fuck out of her at that moment alone(?!?) in the dark, and even many times would see (or was it simply sensing) what appeared to be some anomalous threatening movement of shadow and then she ran through that door, narrowly escaping, and not so securely bolting herself into the room. BUT!!! (and mind you, I have probably actually sat through SUSPIRIA easily about 400 times over the last 40 years (no exaggeration, by the way!)the first time was way back in 1977 when I was 10 years old and it had just been released, and that was even at a large first-run movie house with a memorably large silver screen and an excellent sound system, and I too had NEVER actually seen that lurking, silent, terrifying figure of menacing death before (it must have been Dario, as he is so fond of being the murderous hands whenever it is possible for him to do so) and this posting truly was most illuminating for me as well as it confirmed what I KNEW (but had never been able to see) all along... It REALLY DOES UP, UP, UP the creep-factor of that moment with Stefania's character freakin' the fuck out so elaborately at that moment!
12 September 2017 at 22:26