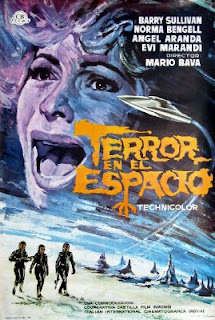 Based on Renato Pestriniero's short story “One Night of 21 Hours”, Planet of the Vampires is a bit of a misnomer – the alien entities that possess the bodies and minds of the crew are more like ‘body-snatchers’ than blood-thirsty vampires. That’s by-the-by though; the title is as wonderfully kitsch, exploitative and lurid as the film itself. In short – it’s totally fitting. While there are undeniable moments of kitsch courtesy of dated costumes and sets, they don’t detract too much from the masterfully eerie atmosphere Bava conjures. 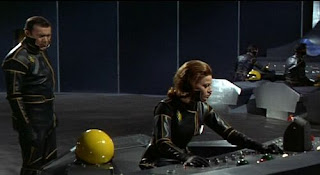 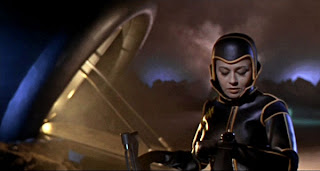 Bava specialised in creating striking and sumptuous looking films with relatively little money. He relied on ingenuity and a penchant for optical effects which have for the most part, stood the test of time. In this film he combines live-action filming with miniature sets and models by reflecting the sets through a mirror that had portions of its reflective surface scraped away so the actors could be seen through it. The result is quite breathtaking. Sure, some of the sets are dated, but with Bava lighting and filming them in that inimitable way of his, they’re imbued them with a distinctly gothic and oddly psychedelic majesty, elevating what is essentially a bargain basement B-movie, to something much more commanding. The film is often credited with being a major influence on Ridley Scott’s Alien particularly in terms of its narrative structure and set design. This is no more evident than in the beautifully haunting scene where the ship’s macho captain and his female companion explore a derelict alien vessel and discover the giant skeletal remains of an alien crew. From the cylindrical passageways to the grotesquely oversized alien remains, one can’t but wonder if O’Bannon and Scott had sneaked a peak at Planet of the Vampires before penning Alien (they claim they hadn’t).

A rather stifling air of paranoia begins to manifest as the crew fall prey to the disembodied entities as they sleep. The dead crew members are buried in makeshift graves on the surface of the planet and as they rise from them, wrapped in plastic burial shrouds, the result is really striking and calls to mind similar imagery in the likes of Black Sunday and the future work of Fulci. They are more space zombies than vampires. The majority of the story features the crew exploring the surface of this strange new world, and of course we’re happy for Bava’s narrative to meander along this path as everything looks so beautiful and eerie – all sinister ground fog and spookily glowing lighting. It is really only in the third act when tension begins to mount as the last survivors engage in a race against time (and each other) to escape Aura before they are dominated completely by their alien nemeses. 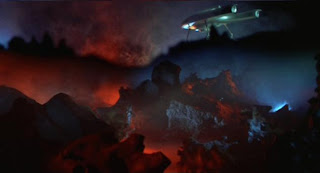 The film’s weak spots include the technobabble-tastic script, awkward dubbing and disposable characters who at times are hard to differentiate. Fans of Italian cult movies shouldn’t be too put off by these aspects; and of course they really add to the film’s irresistible kitsch appeal. The interior scenes of the crews’ ship are also pretty dated and more closely resemble left-overs from Lost in Space or Star Trek; all spacious soundstages and control panels with throbbing lights and weird electronic bleeps. It is the exterior scenes where Bava really succeeds in creating a memorable and hauntingly beautiful landscape that seeps with a gothic otherworldliness.

Planet of the Vampires is a pulpy, lurid comic-strip of a movie in which fans of Bava and cult sci-fi/horror flicks will find much to drool over. It also works well as a companion piece to Queen of Blood for those wanting a kitschy sci-fi double bill to die for. Masterfully lensed and saturated in a foreboding atmosphere, it is a much better film than it has any right to be - and all because of the imagination and ingenuity of Mario Bava.

Wes said…
Great choice, it's one of my favourite Bava's... I don't believe Dan O'Bannon ever acknowledged the film as an influence on Alien but the similarities are remarkable... Great poster as well, I havn't seen that one before...
20 July 2011 at 14:04

James Gracey said…
Yeah, apparently O'Bannon and Scott hadn't seen this before they made Alien. Spooky!
20 July 2011 at 14:36

psynno said…
Thanks James,for highlighting this creepy film -always found it satisfying to watch. You are spot on about the lurid colours and atmospheric lighting creating an uncomfortable atmosphere. Maybe O'Bannon and all didn't see this before Alien, but it's weird that it even has a distress signal at the beginning, as well as the giant skeleton like the cockpit pilot in Alien. The video release in the 90's featured a new electronic soundtrack which I quite liked. Don't know if you've seen that one.
21 July 2011 at 17:17

James Gracey said…
Yeah there are more than a few uncanny similarities! I love that this has so much to recommend it - on the surface it is arguably a disposable b-movie, but with Bava attached and all the aforementioned bits that seem to have heavily influenced Alien, and all the wonderful atmospheric bits and moody lighting, Planet of the Vampires has so much more going for it!
I'm not sure which version I watched - the score sounded vaguely electronic (well, there were lots of bleeps, blips and twinkly bits!), but overall it didn't really stand out too much.
22 July 2011 at 13:24

James Gracey said…
Thanks for clearing that up, Anon. I'd actually read in a couple of places that O'Bannon and Scott had never seen this film. I should really check out Something Perfectly Disgusting by Dan O'Bannon - sounds very informative. Thanks very much for leaving a comment! :)
10 April 2012 at 15:11