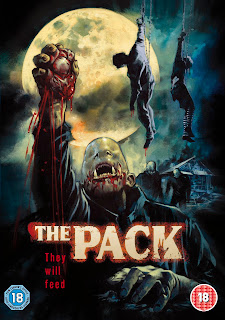 Beginning as a somewhat typical, though no less tautly wound riff on the likes of The Texas Chain Saw Massacre, Wrong Turn and The Hills Have Eyes, an impetuous young city woman picks up a hitchhiker while driving through deepest, darkest France and winds up a captive of some deranged farming folk/French 'hillbillys' at a remote diner. A few scenes where some typical ‘torture-porn’ conventions ensue, as she is beaten, caged up, branded with a hot iron and force-fed some iron-rich substance through what can only be described as the cruel reverse of a cow milking machine. 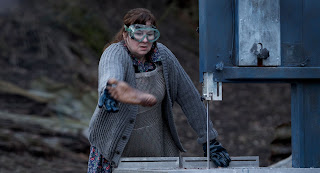 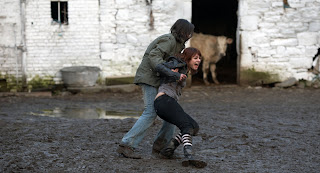 After this, and the introduction of the titular ‘pack’ of creatures, the film tills its most fertile ground and The Pack shifts gear into what can only be described as French Folk Horror. The plight of rural communities and long forgotten folk traditions as industrialisation cuts through the countryside (evidenced in the numerous shots featuring vast pylons stabbing through the otherwise untainted landscapes) seems to be behind what drives the formidable matriarch La Spack (Jeunet regular Yolande Moreau) and her seemingly trampled son, Max. Driven to insanity after the authorities let her sons die underground in a mining accident rather than risk a firedamp explosion, La Spack ritualistically offers her sons and the land under which they dwell, blood sacrifices in the form of anyone unfortunate enough to stumble across her path. Similar territory was explored in the likes of The Wicker Man and the more recent Wake Wood, in which rural communities ostracised from the outside world dabble in dark arts and deeds to bloody, dour effect. The idea of something evil and otherworldly coming up out of the soil and earth was also central to Blood on Satan’s Claw, another shining example of ‘folk horror.’

More grim light is shone on La Spack, her grisly customs and where they stem from when someone mentions that ancient folk traditions and beliefs of village elders included creatures ‘born of mud and the blood of the dead.’ We are told that ‘the earth wants blood’, and as relentless modernisation and industrialisation ever-encroach on ‘old ways’ of life and rural communities and their traditions, it requires gruesome extremes to obtain it. Shots of ancient farming equipment languishing unused under the moonlight and the dank, damp landscapes and rustic old farm buildings in which the story unfolds paint a picture of the neglect and plight of ruralism. A telling newspaper article found by one character rummaging through the bedrooms of the ramshackle farmhouse states: “We raped the earth, now its sending us its MONSTERS.” For me anyway, this is when the film is at its most innovative and original. The subterranean-dwelling creatures emerge, worm-like, as blood drips upon the land from the victims of La Spack as they are hung over it. The sight of them is unsettlingly effective: moon-white skin, no eyes and an abundance of snarled mouth and teeth (think Chatterer from Hellraiser). 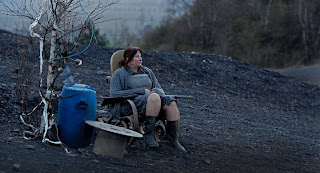 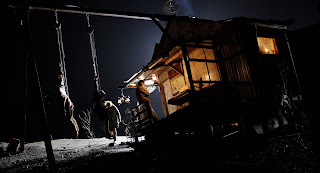 There are nods aplenty to The Texas Chain Saw Massacre and at several stages Hooper’s metaphorical presentation of people as cattle is taken quite literally. As evidenced in Hooper’s classic, an off-kilter sense of humour drizzles throughout The Pack, too. As La Spack, Yolande Moreau provides a powerful performance, amply supported by French New Wave horror regular Philippe Nahon (interestingly cast against type here) as a retired cop and Émilie Dequenne as the tough-spirited Charlotte. In the opening scenes we are given so much information about her through such simple means: her car is loaded with all her possessions, there’s a torn photo in her wallet, she smokes (a lot), has tattoos and isn’t easily intimidated – as depicted in the stressful scene where she and her hitcher fall foul of a grubby biker gang.

Unfortunately, The Pack treads all-too obvious conventions of the genre in the run up to its climax (characters making silly decisions to further the narrative etc), and while this doesn’t really detract too much from its entertainment or make it less suspenseful, it could have used some of the ingenuity and evocative ideas featured earlier to really elevate it.

James Gracey said…
I hope it lives up to your expectations, Aylmer. I watched it without really knowing anything about it - and I wasn't disappointed! The folk horror elements really did it for me.

Unfortunately the UK DVD is as standard as they come - the only bonus feature is a VERY brief (we're talking 3 minutes at the very most) look at how poster artist Graham Humphreys came up with the conceptual artwork for the cover.
6 July 2011 at 12:03