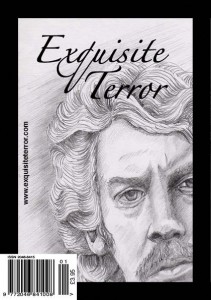 And thus, having emerged from that particular wreckage with dignity just about intact, she has created Exquisite Terror - a brand-spanking-new and independently produced periodical; the intention of which is to take a more academic, analytical approach to the genre of horror.
Issue 1 includes an in-depth essay on actor Donald Sutherland and his career in the 1970s; an interview with promising new Spanish director Guillem Morales (Julia’s Eyes); ‘How to survive vampirism, according to Bram Stoker and Stephen King’; ‘Analysis of the script behind a classic’; a little something penned by yours truly on the Saitama Serial Murders of Dog Lovers (the real life story that provided the inspiration for Cold Fish) and the obligatory much, much more…

Unknown said…
Exquisite terror looks great! Your tickets will be left at the door for you.
28 October 2011 at 16:27