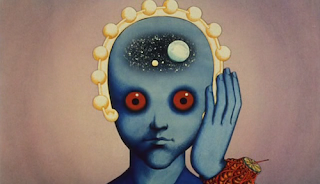 Head over to Paracinema.net to check out the latest instalment of Audiodrome: Music in Film. This month I look at/listen to Alain Goraguer's prog-tastic score for Fantastic Planet; a visually stunning and psychedelic French-language animated feature directed by René Laloux. Combining elements of funk, jazz and prog-rock, Goraguer's music provides a suitably trippy mood for one of the most unique and provocative films you'll ever see.

Why not pick up the latest issue of Paracinema while you’re there? Amongst its lurid delights are articles such as Panic in Detroit: RoboCop and Reagan’s America by Andreas Stoehr; Blood on the Rubber Chicken: Horror Parodies of the Early ’80s by Mike White; and Peter Jackson’s Heavenly Creatures from Hell by Todd Garbarini. All great stuff, written by hardcore fans of genre films for hardcore fans of genre films.
Audiodrome Film soundtrack music Paracinema Magazine Score

Shaun Anderson [The Celluloid Highway] said…
I downloaded this soundtrack a couple of days ago James. I haven't given it the full treatment yet - i.e. lying back in bed with the headphones on, but I do recall it being noteworthy when I watched the film a few years back. I believe it can be enjoyed in all its glory now courtesy of a blu-ray from Eureka.
19 January 2012 at 21:39