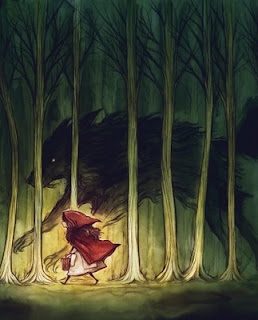 With this central image of a young woman being stalked and menaced through dark and foreboding forests by a snarling, sly and slathering beast, Red Riding Hood has also always had its roots firmly planted in horror. Later adaptations of the folk story, by the likes of Charles Perrault, demonstrate a harsh conservative morality akin to many horror films (particularly certain 80s slasher films) warning of what happens to young people who ‘stray from the path’ and indulge their ‘primal instincts’. It is essentially a dark tale about sexual awakening. The forest, a place used time and again in literature and cinema to represent a place of hidden danger, primal fear and dark threat (but also, interestingly, freedom from the restraint and pressures of conservative society) serves as the suitable backdrop; a place that is as far removed from civilisation as possible.

What further embeds the tale in horror is the fact that the Big Bad Wolf can be seen as a werewolf – another handy metaphor for physical and emotional transformation. In some of the earlier versions of the tale, which took the form of oral folk stories, it was actually a werewolf menacing Red Riding Hood. Werewolves - humans who are condemned to spend their lives transforming into bloodthirsty beasts when the moon is full - are a common theme in mythology and folklore throughout the world, as well as in literature and cinema. They usually serve as allegories of our internal primal instincts and intrinsic savagery, buried deep down under years of civilisation and social conventions – but still lurking there nonetheless. The transformation of human into monster is representative of the manifestation of inner conflict - surrendering to the animal within, and to the primitive side of our nature. Most werewolf stories are concerned, on some level or other, with exploring the consequences of unleashed moral and sexual desires, serving as allegories to warn us of the dangers of indulging our ‘animal’ instincts.


Returning to Angela Carter’s ‘The Bloody Chamber’, we can see that Carter has utilised the figure of the werewolf to explore notions of unleashed sexuality and female empowerment. There are three takes on the tale of Red Riding Hood in Carter’s collection of short stories, and each one refigures the tale to reveal different aspects of ‘womanhood.’ Carter consistently challenges the way in which women are represented as passive victims and as such, the women characters in her retellings aren’t rescued by woodsmen, but by themselves, their mothers and by other women. The stories deal with ideas and notions of the traditional, submissive roles women were forced to play in relationships, the uneven balance of power, the reclaiming of female sexuality (something denied and oppressed by patriarchal society), identity, coming of age and their eventual ‘corruption/liberation’ brought about by embracing their sexuality and attaining empowerment. These themes found their way into John Fawcett's lycanthropy-as-metaphor-for-female-adolescence movie, the Karen Walton penned Ginger Snaps (2000); surely the most significant and effective example of 'feminist horror' since Carrie. In Ginger Snaps, Red Riding Hood is the wolf.
Catherine Hardwicke’s sensibilities and preoccupation with younger characters attempting to find themselves, and her choice of cast, compliments and at times even seems filtered (albeit in a rather diluted way) through Carter’s own approach to Red Riding Hood as a tale of the empowerment of young women. Red Riding Hood features a trinity of actresses renowned for their portrayals of strong, complex women in a myriad of unconventional roles and movies: Julie Christie, Virginia Madsen and Amanda Seyfried.