Happy 'Bloody' Birthday, Behind the Couch 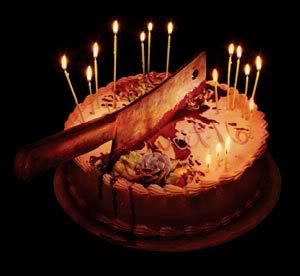 Thanks so much to everyone who has swung by over the last year. There were quite a few great films watched and reviewed, the usual plethora of bad films, and of course, absolutely fucking ridiculous films. Natch. This year I also rejoiced (sort of) at the return of John Carpenter to our screens, pondered the sickening excesses of the films of Lucio Fulci and celebrated the centenary of none other than the patron saint of Behind the Couch, Mr Vincent Price. Huzzah! There was also a Halloween movie marathon and the usual contemplation of all things gialli and trashy. Fun times.

Away from the blog, I’ve continued to contribute to the likes of the really rather awesome Paracinema- including a new monthly feature on their website looking at music in cult cinema – and the brand-spanking new indie publication Exquisite Terror.

Also! Earlier this year an excerpt from an article I wrote about Sergio Martino was used as the title of an all-new 20 minute interview with the director, which appeared on the Shameless DVD release of The Strange Vice of Mrs Wardh. Exciting stuff, eh? The interview was called Thrills, Chills and Cleavage, and according to Shameless, was an apt title for a mini-doc about the filmmaker. You can read the article here.

Here’s to the next year of writing about horror movies! May it be as wine drenched, bloody and as good as this one!

Vulnavia Morbius said…
Hah! I share a birthday with your blog! I clicked over this morning and my first thought was: "How did they know it was my birthday?"

James Gracey said…
You're too late! Sorry. *Hic* It's all been drunk.

Matthew Coniam said…
Conratualtions, James, you're the best.
I would say more, but I've had too much merlot - and that's your fault as well.
8 December 2011 at 20:49

Jenn said…
Hi James! Happy blog birthday! It's almost Cavalcade birthday time too! Here's to another year for the both of us!
9 December 2011 at 05:37

Cody said…
This is belated but the bloodiest of birthday wishes nonetheless to Behind The Couch!
14 December 2011 at 15:40