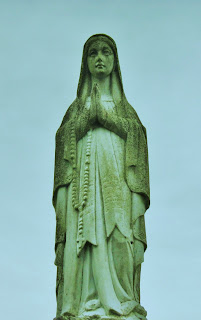 As mentioned in my post about Abney Park Cemetery, I like wandering around graveyards – the older the better - and taking photos. I’ve been staying outside Newport, County Mayo with friends for the last few days, and much to my morbid delight was able to visit the ruins of Burrishoole Abbey and the cemetery that surrounds it. Situated upon a sheltered shore just outside the town, the abbey was founded in 1470 by Richard de Burgo of Turlough - Lord MacWilliam Oughter - and apparently built without the permission of the Pope. In 1793 the roof of the abbey collapsed and because almost all the friaries and abbeys across Ireland were suppressed in the wake of the Reformation in the 16th century, it was never rebuilt. All that remains today is the rather gothic looking church and the eastern wall of the cloister, while the grounds are still used as a cemetery.

The close proximity of the cemetery to the sea and the eerie atmosphere such combined imagery evokes, really reminded me of the setting for The Woman in Black (1989). Being the horror aficionado that I am, I tried to find out if there were any reported hauntings or spooky tales about the place, but sadly these proved elusive. I did however read a gruesome story about the brutal deaths of several nuns at the hands of British soldiers in the vicinity of the abbey.

In 1563, Sister Honoria De Burgo (Nora Burke) daughter of Richard an Ierain (Iron Dick) – the second husband of pirate queen Grace Ó Malley (Granuaile) – built a small convent close to the abbey where she lived with her fellow sisters. Around 1580 she and the other sisters fled from marauding British soldiers and sought sanctuary in the mountains. When they thought it safe to return to the convent, they were seized by the soldiers, stripped, beaten to death and their bodies thrown into a boat. One of the sisters, Magaen, managed to escape, and when she reached the shore she hid in the forest. Seeking refuge inside a hollow tree, she was found dead the following day and eventually buried alongside her sisters. Perhaps they still wander the grounds of the abbey and the surrounding shore?

Here are a few photos of the place for your enjoyment. 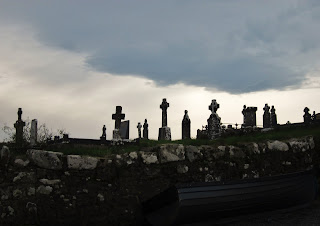 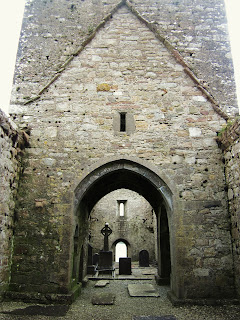 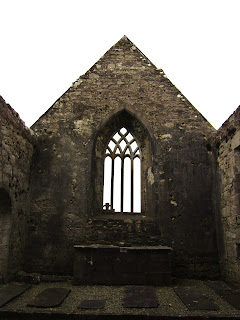 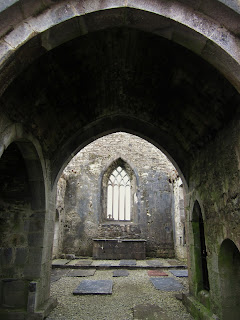 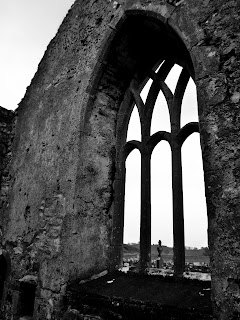 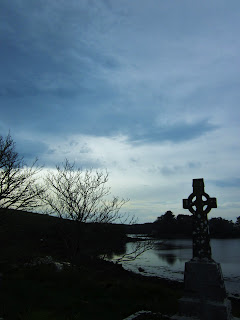 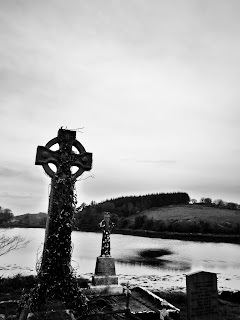 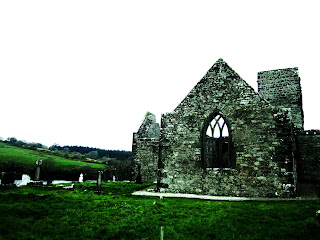 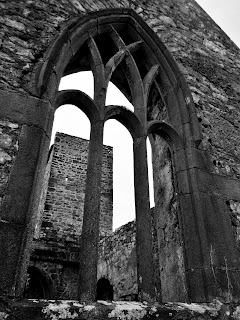 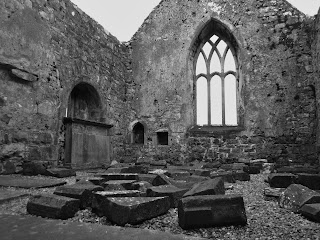 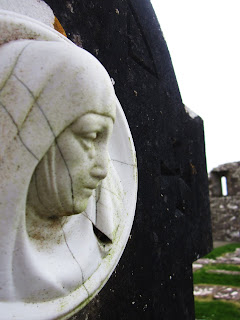 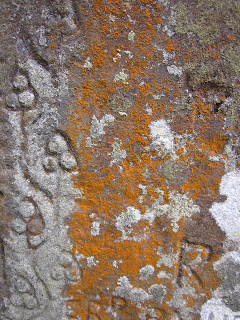 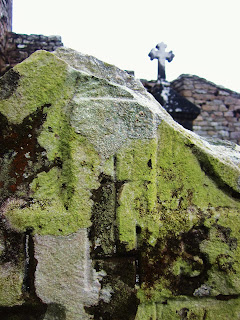 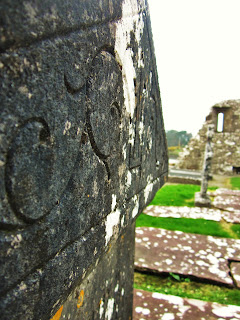 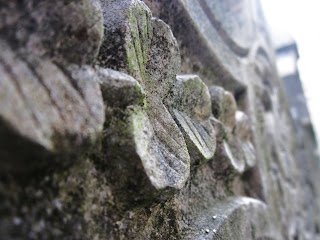 Wes said…
A wonderful post James, superbly evocative and those pics are just great... Actually I was taking a walk along some of the wilder trails around Kinsale yesterday, and discovered a forgotton graveyard, beautifully overgrown with vegetation, the headstones eerily anonymous from years of weathering. I love these kind of desolate zones... James have you checked out Simon Marsden's photographic book In Ruins: The Once Great Houses of Ireland ? It's a wonderful compendium of haunted spaces. Well worth seeking out.
26 March 2012 at 20:44

Christine Hadden said…
These photos are pure bliss - so bleak and morose...

Have you ever thought of doing a book of photos such as these and your other cemetery ones? Combined with some of the stories like the one above, it would a beautiful thing! You have a very keen eye.

the coelacanth said…
awesome, atmospheric and eerie photos. between this and the abney park post, you've really captured the essence of these crumbling, mouldering, solitary places which i like to imagine are frequented by the spirits of the dead. i look forward to more of these graveyard pictorials.

Shaun Anderson [The Celluloid Highway] said…
Thanks for this James - something a bit different, but very much appreciated. I also like exploring evocative locations such as these. There is a particularly interesting church in a small village called Kilpeck in Herefordshire, which is adorned with very odd and ugly carvings of gargoyles. If I get the opportunity I'll head out there and take some photos.
28 March 2012 at 14:19

James Gracey said…
Thanks guys! Glad you enjoyed the snaps.

@Wes – I’m sadly not familiar with In Ruins: The Once Great Houses of Ireland, but I shall be adding it to my wish list; thanks so much for the recommendation. The forgotten graveyard you stumbled upon in Kinsale sounds wonderful! Any photos?

@Christine – Cheers! Glad you liked them. And that’s a very interesting suggestion re: a book of graveyard photographs and eerie stories. One to ponder while weak and weary. ;)

@Joe – Thanks – hopefully it won’t be too long before I find myself wandering around another such moody place. My friends really do despair of me!

@Dr Theda, if you ever get the chance, this place is really worth visiting. So much beautiful scenery tucked away just waiting to be discovered.

@Shaun – thanks amigo! I enjoyed posting the photos of Abney Park cemetery, and the positive feedback made me think of trying to do similar posts more often. I really hope you get the chance to snap some of those gargoyles you mentioned! I shall look forward to checking them out if you post them. Which I hope you do. :)
28 March 2012 at 15:42

systemshocks said…
Beautiful photos, James. I love those celtic crosses - very mythical. I'm going to Whitby next week - might try to post some photos of the abbey and other Dracula locations. Hope you are well.
28 March 2012 at 19:32

James Gracey said…
Cheers Jon. Hope you have fun in Whitby - sounds like it'll be a lot of fun treking around all those Dracula locations. I'm very jealous! And yes, take plenty of photos. Can't wait to see 'em!
28 March 2012 at 19:42

Warden Stokely said…
Hi James! 1470?! Man, that might seem that old to you guys over there, but over here in America? That's pretty old. Built without the permission of the Pope? Boy, I'll bet that pissed him off. haha. Pirate Queens and Iron Dicks? James, could your country become any more interesting? I think not. The poor sister who made it to the tree only to did in it. I'm glad she was found and laid to rest with her sisters. So incredibly sad. Ug. The spoils of war and land mongery. Like I wrote under Belfast cemetery, I have a thing for them. But for some reason, this one makes me very sad. You've got a link to your Abney Park post. I'm going there now. Maybe that will cheer me up....
2 December 2013 at 03:55

James Gracey said…
Yes, it is indeed a pretty sad story Stokely. Burrishoole Abbey is an incredibly atmospheric place - every time I visit County Mayo, I try to visit the abbey. It was only after I took these photos I decided to research the history of the place. So glad I did. Such a rich and spooky history.
8 December 2013 at 00:25

Pangur Ban said…
On RTE radio - Sunday Miscellany - yesterday morning -Sunday 15 Dec. 2013 - a lady called Cathleen Brindley talked about these Dominican nuns being murdered by Cromwellian soldiers. She also visited a former Dominican convent - now a hotel - in Taormina, Italy where there are 2 wall frescos. She was able to find one of the frescos - the body in the tree trunk, I think - but not the other. She was excellent.