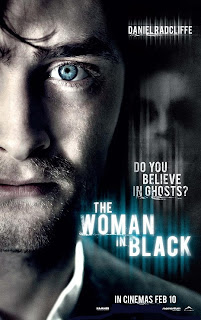 A young lawyer travels to a remote village to conduct an inventory of a deceased client’s possessions. He gradually realises that the dead client is connected to a sinister spectral woman – the sight of whom preludes the death of a child - that is terrorizing the local population.

The Woman in Black is an exercise in slow burning horror, and the narrative unfolds with a degree of odiousness and suggestion appropriate for such a traditional ghost tale. From the outset, grief is the overarching theme that binds the story together in this version of Susan Hill’s classic chiller. From the genuinely unsettling opening scene - depicting the suicide of three young girls as they leap from the window of their nursery, accompanied by the sound of their mother’s screaming – to the protagonist’s sustained anguish at the death of his wife; the notion of grief as an escapable snare hangs heavy over proceedings. The film unravels as a spooky and, for the most part, highly effective throwback to the gothic heydays of Hammer Horror. As this take is also obviously designed for the contemporary multiplex crowd, it is laced with jump moments, but they never seem contrived, and they enhance the ‘old school’ ghost-ride feel. Whereas the original film elicited icy spine-chilliness by revealing the eponymous character in open spaces during daylight hours (the juxtaposition of which proving incredibly effective), Watkins' take relegates her firmly to the shadows for the most part; we catch brief, corner-of-the-eye glimpses of her here and there, usually through fairly subtle use of CGI, which isn’t as tacky as it sounds. She’s usually reflected in or appears outside of a window, or seen lingering on the periphery of the screen. 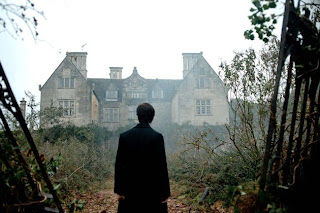 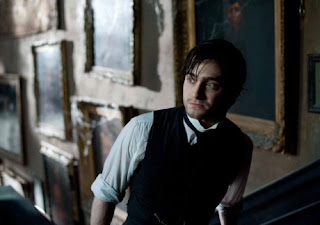 For the most part Jane Goldman’s screenplay sticks closely to the source material, and indeed the original adaptation, however much less time is spent on the story before it moves into the creepy confines of the house. That said, the plot which unfolds in this update is much more detailed and throws up frequent surprises for those already familiar with the story. It arguably even develops certain aspects of the original such as the sinister connection of the titular woman to the deaths of children in the local area. Beginning with quiet moodiness and gradually cranking up the tension, The Woman in Black eventually hurtles towards its climax as a race against time ensues to try and break the curse that enshrouds the house and its surrounding land. A major departure that helps to build suspense occurs when Arthur wades out into the marsh to retrieve a body in an effort to provide peace for a tortured soul. This scene exudes a claustrophobic immediacy and provides some powerful imagery.

Due to the generous budget, Watkins is able to effectively convey the isolation of Eel Marsh house with expansive shots of the causeway that leads to it. The house itself appears as a throwback to prior Hammer abodes, perched atop a craggy island and engulfed by mist. Whereas the house in Herbert Wise’s Nigel Kneale-scripted version was a much less gothic locale due to its modernist use of electricity, enhancing it with a unique atmosphere all of its own; the house in Watkins’ film is somewhere the Prince of Darkness himself wouldn’t seem out of place. 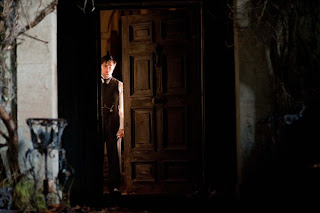 As Arthur Kipps, Daniel Radcliffe has to carry the film, and he does an admirable job. Due to his character’s circumstances he carries the weight of the world on his shoulders and Radcliffe aptly conveys Kipps’ sense of loss and sadness before his life is thrown into turmoil by the creepy encounters in the story and he’s terrified almost to the brink of insanity. While the bittersweet ending is a much ‘happier’ one than the original, it works perfectly well within the context of this particular adaptation and its overt melancholy romanticism; however it also highlights just how shocking, and daring, the ending of the 1989 version is. The Woman in Black offers a refreshing throwback to gothic chillers of yore for those who have grown tired of, well, whatever current horror fad stalks the local multiplex. Like many great ghost tales, it provides not only chills and thrills, but something of an emotional impact, too.

Dan O. said…
Not especially original and not tremendously scary, but there are a few pleasurable jolts of fear, some shiver-down-your-spine moodiness and it doesn’t overstay its welcome for too long. Nice write-up James.
13 March 2012 at 14:17

systemshocks said…
Nice review, James. The only one I've read that actually makes me want to see the film! I enjoyed Eden Lake - with so many Brit directors being touted these days as horror's next big thing maybe Watkins in the one to watch out for! :)
13 March 2012 at 17:26

Christine Hadden said…
I now have no reason to write a review of this film. Well said.

Glad you enjoyed it as well as I did. The first one probably entices more chills, but the second one has its spooky charms as well, and like you said, is quite refreshing given what has been thrown at horror fans over the last several years...
13 March 2012 at 22:18

Bill Dan Courtney said…
Hi, I think you were following my Necrotic Cinema blog. Or at least I seem to following yours :) I had to change the URL for a arcane couple reasons. Things will improve for me but the drawback is I lost all my followers. If you like the sick site can you refollow me at:

@Dan - When I went to see it last week, the Daniel Radcliffe fan brigade was out in full force. You'd have thought, by the screams, we were watching something truly terrifying; which we weren't! Some people even walked out, poor mites. Still, for a 12 rated film it was quite creepy in places, and the lack of gore and violence was nice.

@Jon - I totally didn't even pick up on the fact that James Watkins directed Eden Lake. I loved that film! Woman in Black is certainly a very different film, but very well directed and as moody as you'd hope.

@Christine - Truth be told, I prefer the first adaptation; but like you said, the 2012 version is not without its spooky charm! Glad you dug it too, I know how much you adore the 1989 version. ;)

Ian Powell said…
I have to say I really wanted to like this film, but both myself and my ex found ourselves deeply un-moved, and the young audience around us reacted to the (pretty obvious) scares as if they had never seen a scare movie before. I also found the look of the film a little artificial, as if it had been mostly created in a computer, rather than by using old style on the set lighting techniques as Bava would have done. Still I am glad the resurgent Hammer has a Hit on their hands and now maybe they could save Bray Studios for the nation.
15 March 2012 at 18:14

James Gracey said…
Yes Ian, it would be fantastic if Hammer could save Bray. Let's hope their current films continue to grow in quality.
15 March 2012 at 18:57

Updates, Changes... and No Response you might be considered D.E.A.D.

"The Horror Blogger Alliance" is having a "Give Blood [Money]" Drive,
March 10th to April 1st 2012, for
more details: http://horrorbloggeralliance.blogspot.com/

James Gracey said…
Thanks Jeremy. So does this mean that members who don't/can't make a financial donation will be removed from the HBA?
19 March 2012 at 20:16

Cody said…
This one had moments that really, really unsettled me. The only problem I had with the film, and that I think holds it back from being amazing, was indeed the ending. It did work in the context of the film but I yearned for the wonderfully nihilistic finale of the original.
25 March 2012 at 08:46

James Gracey said…
I enjoyed this, but I think that's mainly because I just adore the story. There were elements I loved about the remake, but I still prefer the original!
28 March 2012 at 15:53

Unknown said…
Glad to see something even vaguely positive about this film! I still haven't seen it but I'm curious to see how Daniel Radcliffe performs in this new Potter-free setting.
Great review :)

James Gracey said…
Thanks Laura. It's not a bad film - though not a patch on the original. And Mr Radcliffe was adequate. Hope you enjoy it! Thanks for stopping by.
4 June 2012 at 13:50