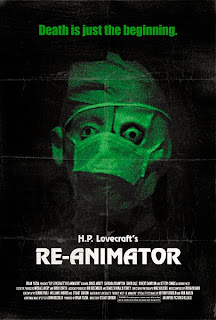 When the eccentric Herbert West arrives at Miskatonic University, Arkham, he and a fellow medical student become embroiled in strange experiments to reanimate dead tissue. With horrific consequences. Based on H.P. Lovecraft’s short story Herbert West – Reanimator, Stuart Gordon’s film is perhaps one of the most successful adaptations of the author’s work, and it triggered a resurgence of cinematic interest in the work of Lovecraft throughout the 80s and 90s. The film is an outrageous blend of splattery special effects, pseudo-sci-fi concepts, comic violence, pitch black humour and vivid horror. At times it boasts a similar madcap tone to Sam Raimi’s earlier splat-stick classic, Evil Dead, as Dr West’s (a manic Jeffrey Combs) increasingly desperate and ludicrous attempts to reanimate corpses reach feverish intensity.

The idea to make Re-Animator stemmed from Gordon’s belief that there were not enough Frankensteinian stories. He believed pop-culture had become saturated with vampire tales and Dracula adaptations. He was contemplating revisiting Mary Shelley’s classic when a friend recommended he check out Lovecraft’s creepy tale of the reanimated dead. A huge fan of Lovecraft, Gordon initially planned to adapt the story for stage, but was eventually persuaded by writers Dennis Paoli and William Norris to produce it as a television pilot. He was later introduced to producer Brian Yuzna, who in turn persuaded the director to adapt it as a feature film, as he believed horror films were more sellable at the time than TV shows. Together they decided to introduce elements of comedy into the script as it may otherwise have been too dark and violent to get past the censors. Indeed it is the comedic aspects of Re-Animator and its hysterical tone that sets it apart from Lovecraft’s deadly serious and grim source material, which was serialised in six instalments for publication in Home Brew in 1922. Herbert West serves as one of the first examples of the reanimated dead (that’s zombies to you and I) as cannibalistic ghouls with fiendishly violent temperaments. Lovecraft later voiced his dissatisfaction with the tale, claiming he only wrote it for the money. Indeed, Lovecraft scholar and expert ST Joshi suggests Herbert West is “universally acknowledged as Lovecraft's poorest work.” That said, it’s still a lot of fun and exhibits a pulpy enthusiasm for the macabre, plus the various references to Coleridge and Shelley remind us of its Gothic heritage. 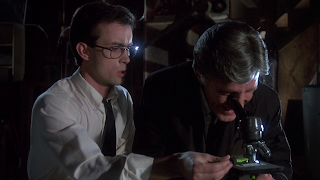 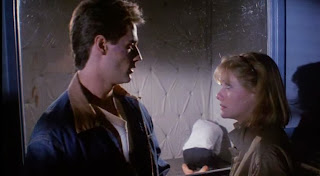 Gordon and co focused mainly on the first two instalments – From the Dark and The Plague Daemon – which focused on West’s ghastly exploits as a student at the Miskatonic University, incorporating a few details from the other instalments, such as the character and fate of the sinister Dr Hill (a WW1 pilot in the short story). Yuzna would later use material from the last two episodes – The Horror from the Shadows and The Tomb Legions – when he was concocting the sequel, Bride of Re-Animator. Lovecraft’s story spanned decades and continents and retained a vaguely epic scope, whereas Gordon reins it all in, letting it unfurl predominantly in the labs and morgues of the university and the basements of the main characters. The director leaves nothing to the imagination as limbs are lobbed off, innards sloshed across the screen, heads severed and, in one particularly memorable moment, the reanimated corpse of Dr Hill straps Meg (lovely, lovely Barbara Crampton) to a gurney and slowly forces his decapitated head on her to perform cunnilingus. 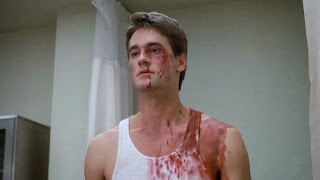 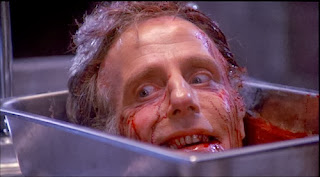 The more riotous the violent set pieces become, the more grotesque the comedy that ensues. The cast all have a ball, particularly Jeffrey Combs as the dastardly Herbert West. Some of the best moments occur during the scathing exchanges between him and his arch nemesis Dr Hill. As the straight-laced accomplice Dan Cain, Bruce Abbott acts as a foil to West’s erratic experiments, and he provides, or tries to provide, a voice a reason throughout the increasingly chaotic carnage. The romance between Dan and Meg was included by Gordon as a way to flesh out the characters and help make them more sympathetic – there are no such romantic notions in Lovecraft’s work, and female characters are rare. Richard Band’s inspired score perfectly captures and enhances the mischievous and maniacal tone, famously riffing on Bernard Hermann’s classic score for Psycho; all stabbing strings, rumbling bass and giddy intensity.

Re-Animator is now, rightly, considered a cult classic. Its deranged sense of humour and innovative special effects mark it as one of the most inspired horror comedies of the Eighties and made a cult icon of its star Jeffrey Combs. As interesting as much of Gordon’s subsequent work is, it rarely reaches the sordid heights of this lurid maelstrom of a movie.
Adaptation Comedy Horror Eighties Horror Herbert West - Reanimator HP Lovecraft Jeffrey Combs Re-Animator Splat-Stick Splatter Movie Stuart Gordon Zombie Film