A Nightmare on Elm Street Month 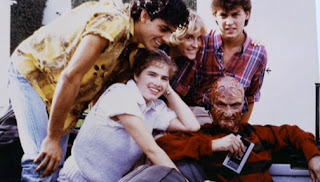 Last October I revisited the Halloween series in the lead up to All Hallow’s Eve, and the year before that I found myself back at Camp Crystal Lake as I delved head first into the Friday the 13th films. This year I thought I’d try and keep up the tradition of a month long marathon exploring an Eighties slasher series and have decided to watch all seven A Nightmare on Elm Street films (including Freddy vs. Jason and the 2010 remake). These things just have to be done sometimes.


A Nightmare on Elm Street is one of the most successful series in horror history, and love it or loathe it, there’s no denying the impact the series has had on horror cinema. Wes Craven’s groundbreaking 1984 film completely reinvigorated the Eighties slasher movie, with its provocative tale of a sadistic killer who preys on his teenage victims in their dreams. Its central antagonist Freddy Krueger is one of the genre’s most recognisable icons, heck, he's practically the poster boy for the Eighties. Craven’s film not only featured feverish suspense, surreal dream sequences and fantasy horror set-pieces which blurred the line between dream and reality, but was also enriched with themes evident through the director's work, including teenage angst, familial strife and generational conflict. Practically broke by the time he made the film, Craven had to sign over the rights to New Line and suffer the indignity of seeing his shadow-dwelling child killer diluted almost beyond recognition, as sequel after SFX-driven sequel reduced Krueger to the Norman Wisdom of the slasher world, with bad puns and a penchant for slap-stick violence.

So, refill your glass, set your tolerance level for bad one-liners and ludicrous fantasy horror to ‘high’, and join me if you will, on a bloody trek back to Elm Street, Springfield; to where all those sleepless nights in shredded bed sheets first began…