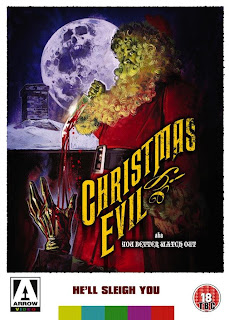 AKA You Better Watch Out

When he sees his mother canoodling with someone dressed as Santa on Christmas Eve, something snaps in little Harry Stadling’s head. Years later, when he’s all growed-up, Harry has developed an obsession with Christmas, and with being Santa Claus. Intent on delivering presents to those he deems ‘good’, Harry sets off into the night with toys stolen from the factory where he works, determined to bring joy to the hearts of children - whether they like it or not - and vengeance upon his bullying co-workers.

Part psycho-on-the-rampage narrative, part character study, Christmas Evil is many things; most of all surprising. To begin with, it really taps into the arguably inherent creepiness of the notion of a man who leaves presents for children by entering their house in the dead of night via their chimneys. Of course, for a modern audience, many of the moments in the film - such as when Harry (a brilliantly unhinged Brandon Maggart) spies on his neighbour’s children to see who’s behaving and who’s not - carry unsettling connotations and layer the film with an added perversity. As events unfurl though, it quickly becomes obvious that while its tone is wildly uneven, Christmas Evil has more than a few surprises up its white-furred red sleeve. It benefits from an off kilter humour, which veers between uncomfortably dark and unabashedly camp, and its attempts to subvert a number of Christmas movie clichés are spot on. In any other film, a man who dresses as Santa Claus to deliver stolen toys to children would most likely be a warm-hearted family affair. In Christmas Evil, there’s an almost ever-present creepiness to proceedings. Any sympathy the audience feels for Harry is down to Brandon Maggart’s performance. We see him quietly despairing in subdued, reflective moments, as well as committing sporadic acts of violence. 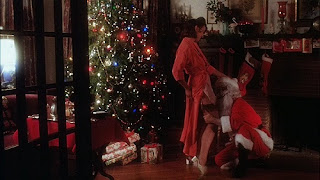 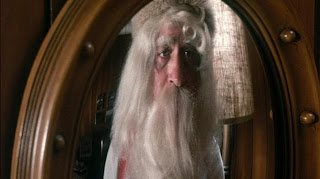 As mentioned, a number of moments wouldn’t be out of place in a feel-good family flick about Santa Claus. When he’s seen looking in through a window at a party, Harry’s invited in to dance with the guests and give gifts to the children; basking in the glow of the warm welcome he’s given. There’s also a strangely moving moment where he delivers toys to a children’s hospital and is later protected from a rampaging mob of parents by a group of children who believe he is Father Christmas. Later though, when Harry is pushed over the edge by the hypocrisy of his employers and events move into overt horror territory, a startling bloodbath erupts outside a church, and the star from atop a Christmas Tree becomes a means to a bloody end. The fact that Christmas can be a desperately sad and lonely time for many individuals is also rife throughout the narrative. The juxtaposition of Harry’s isolated existence with that of his brother’s family life is particularly effective, if somewhat under-explored. Director Jackson also takes barbed pot-shots at the scaremongering tactics of the media, evident in the scenes featuring TV broadcasts urging viewers to avoid anyone dressed as Santa - there’s even a line-up of Father Christmases.

As soon as we begin to think Harry is harmless enough (the worst he initially seems capable of is leaving a bag of coal at a badly behaved boy’s front door), he does something that’s just downright creepy (he’s seen spying on the boy from nearby bushes, and marking the homes of naughty children by leaving an imprint of his mud-smeared face and hands on the front door)… A few anachronistic moments add a touch of the fantastical to events, such as the scene where Harry is pursued through the night by local residents brandishing flaming torches - which echoes any number of old Universal Monster movies - and the genuinely bizarre twist ending that may very well make you spit out your mulled wine… Also unusual and unexpected is the way in which Harry actually fetishises Santa Claus. The moments where he’s putting his costume together while longingly gazing at himself in the mirror as he tries on an assortment of wigs, beards, clothes and padding are as humorous as they are unsettling. 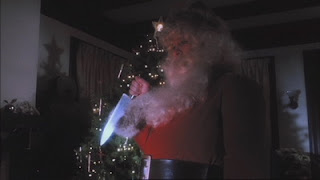 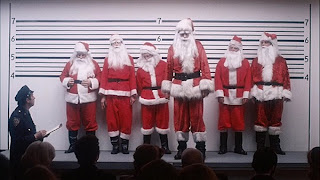 With its coal-black comedy and sudden moments of violence, Christmas Evil should surprise those willing to come to it with an open mind. It is often unexpectedly sweet - in its own demented way of course, and emerges as a deranged Christmas-themed oddity John Waters described as "the greatest Christmas movie ever made." That probably tells you all you need to know.

Matt-suzaka said…
Boy I really love Christmas Evil, and what a wonderful review this is, James.

I think it's really interesting how Harry looks at Santa as being the type of person he isn't (pathetic and lonely), and the only way he can ever be loved and respected is to become Santa. Being Santa gives him the confidence that he never had as Harry. Pretty interesting stuff for a film that's always been lumped in with the other holiday Slasher films.
20 December 2012 at 04:10

deadlydolls said…
I LOVE this movie for all the reasons you mention. It's not afraid of making Harry a genuinely dangerous and mentally ill man, but it's also so weirdly charming and earnest. Such an underrated and easily overlooked little movie that's WAY better than the 'killer Santa Claus' tag it often gets lumped into.
21 December 2012 at 11:57

James Gracey said…
I'd never seen this one before, but I cannot tell you how surprised I was by it! It REALLY pissed over my expectations and unfurled as something so far removed from what I initially anticipated, I might have fallen a little in love with it. And that ending? That made my Christmas this year! Magical stuff.