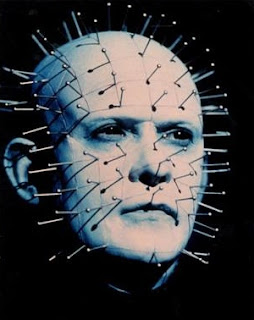 With its blushless exploration of adult themes such as sado-masochism, eroticism, pain/pleasure thresholds, and its searing imagery of grisly body-modification and skinless resurrections, Hellraiser marked writer/director Clive Barker as an extraordinarily singular voice in horror. Based upon his novella The Hellbound Heart, it tells of individuals who seek the most extreme forms of self-gratifying pleasure before losing their lives (and souls) to a group of sinister, self-mutilating figures from another dimension. To say bloodshed ensues is a vast understatement.

While the film boasts a deliciously gothic score courtesy of Christopher Young, Barker had originally commissioned British industrial outfit Coil to score the film. The ‘bowel-churning’ soundscape they delivered wasn’t considered commercial enough by the studio, though the band later released it in various collections of their work.

Head over to Paracinema to read about the unused Hellraiser score and listen to a couple of tracks.

While you’re there, why not pick up a copy of Paracinema Magazine issue 20. Inside you’ll find the likes of A Serbian Film: Transgressive Horror in the Internet Age by Thomas Duke; Eyes Wide Open: Finding the Key to Stanley Kubrick’s The Shining through Rodney Ascher’s Room 237 by Todd Garbarini; They Call Me Bruce: The History of Bruce Lee Exploitation Cinema by Will Sloan; Sam The Great And Powerful by Bryce Wilson, and much, much more.

If you’ve already pre-ordered a copy – apologies for the delay – as soon as it’s back from the printers, it’ll be winging its way to you, like Q the Winged Serpent in magazine form.
Audiodrome Body Horror Body Modification Clive Barker Coil Demons Eighties Horror Film soundtrack Hellraiser music Paracinema Magazine

Rg Lovecraft said…
Christopher Young's soundtrack is definitely one of my favorite horror scores, however I still love Coil's. I'd love to watch Hellraiser with their soundtrack as opposed to Young's because I bet it'd be quite the experience. Thanks for the article on this not-so-well known horror fact!

James Gracey said…
Thanks for dropping by Rg. Young's score for Hellraiser is also one of my favourites; so gothic and moody. As soon as I heard Coil's unused score I also fell in love with it - it would be pretty interesting to see the film with this score, just to see if it altered the experience any.
12 September 2013 at 22:16

scary costumes said…
Awesome, this was a absolutely superior post. In approach I'd like to address like this too - demography time and absolute accomplishment to accomplish a acceptable article... but what can I say... I adjourn alot and never assume to get something done.
scary costumes
23 September 2013 at 10:48