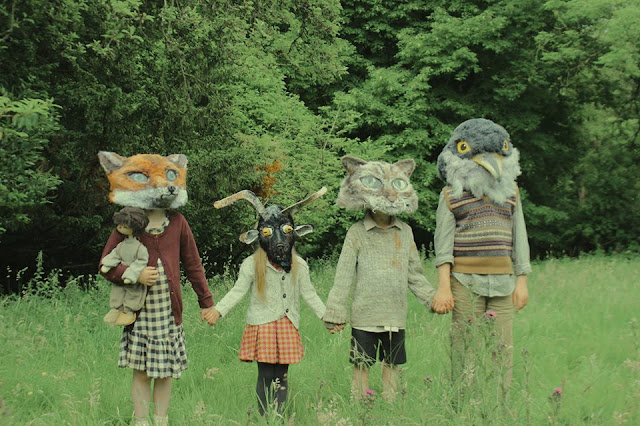 Nominated for Best International Short at the International Women in Horror Festival and the Nightmares Film Festival, Childer (an Irish colloquial word for children) is written and directed by Aislínn Clarke (The Devil’s Doorway, 2018). It tells of Mary (Dorothy Duffy), an introverted single mother, who suspects she and her young son are being stalked by feral children living in the woods surrounding her home. She spends her days obsessively cleaning, trying to maintain order, and preventing her son from playing with the forest-dwelling children.
Clarke’s screenplay explores ideas concerning parenthood, obsession, loneliness, and mental illness. The spectre of Shirley Jackson drifts throughout proceedings as domestic, homey spaces become veiled in quiet menace and the seeming innocence of childhood takes on sinister qualities. The beautiful photography by Ryan Kernaghan and art direction by Claire Fox help imbue the story with an eerie fairy tale quality: the little house, neat and ordered, surrounded by forbidding woods, and the gradual encroachment of the woods - and whatever forces may reside there - into Mary’s home in the form of leaves, branches and dirt. Mary’s constant reminders to Mark (Luke Walford) to stay away from the other children feel like a foreboding harbinger. Certain images, such as the wayward vine growing out of the plughole in the bath, and the well-tended little cabbage patch at the bottom of the garden, reflect Mary’s feelings of being overwhelmed, losing control. Her anxiety is manifested in the repetitive tasks she conducts to attempt to provide herself with a sense of order. She is plagued by dark botanical dreams and intrusive unwelcome thoughts of uncleanliness: the moment she watches in frozen horror as a drop of egg yolk drips off her son’s piece of toast onto the kitchen table is filled with tension. Events culminate on Halloween night as young Mark dresses as a ghost and disobeys Mary, venturing into the dark woods to play with the other children, the identities of whom are hinted at in an exceptionally dark revelation…
With striking imagery, dark humour, nods to fairy tales, folklore, the Female Gothic and folk horror, Clarke’s short film is a haunting meditation on the horrors of parenthood (and indeed childhood) and what happens when overprotectiveness and the longing for (unattainable) perfection and second chances become bloodied obsession.
You can watch Childer here.
Aislínn Clarke Domestic Horror Family Horror Female Gothic Folk Horror Northern Ireland