After placing his senile wife in a care home, retired astronomer James Parkin (John Hurt) heads for the coast to revisit their ‘old haunts’, including the now out-of-season hotel they honeymooned in. By day he is stalked along the windswept beaches by a spectral figure dressed in white, and by night he is terrorised by strange sounds and someone, or something, attempting to enter his room…

In the 2000s BBC4 attempted to reignite the old Ghost Story at Christmas tradition by adapting MR James’s A View from a Hill (2005) and Number 13 (2006). This series was seemingly short lived though, as their next outing wasn’t until 2010, and an unusual reinterpretation of James’s classic chiller Oh Whistle and I’ll Come to You, My Lad. While de Emmony’s direction captures the atmosphere and tone of James very well, this film differs significantly from other adaptations, including Jonathan Miller’s supremely unsettling 1968 take.

Neil Cross’s screenplay only incorporates certain elements of James’s original story, making this a very loose adaptation; indeed it emerges as something more akin to homage than direct adaptation and MR James is actually only credited in the film’s end titles. Whereas James’s protagonists were typically scholarly bachelors prying into ancient texts and rites, or attempting to locate and unearth arcane artefacts only to unleash spectral/demonic/otherworldly avengers, this adaptation features no such themes. The titular whistle is replaced by a ring - which highlights Parkin’s marital issues and his mourning over his wife’s descent into dementia. The only real link with the film’s title is when Parkin sings a line from the song by Scottish poet Robert Burns (Oh Whistle and I’ll Come to You, My Lad) to his wife as he bids her farewell.

Cross ensures his story of a man haunted by his wife’s spiral into senile dementia, leaving nothing of her former self behind, is bolstered by a strong emotional core, something conspicuously absent from the work of MR James. Parkin may be sternly rational and ‘level-headed’ but he differs from the typical Jamesian protagonist. His attempts to emotionally reconcile himself with his wife’s impending demise are not typical Jamesian traits. James’s protagonists were bookish bachelors who certainly didn’t exhibit much emotion, save for the petrifying fear they experienced when subjected to spectral visitations or hauntings brought about by their intellectual arrogance and academic prying. Parkin is typical of James’s scholarly protagonists in his insistence that we dwell within a world of reason and icy rationality. His staunch disbelief in an afterlife - ‘there are no ghosts in the machine’ - is what sets him up for a fall when he experiences strange events that can’t be explained away, and he finds himself jolted out of his now lonely existence into a world balanced precariously on the brink of some vast unknown. 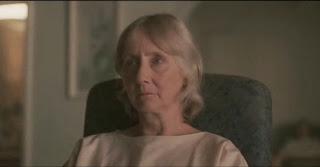 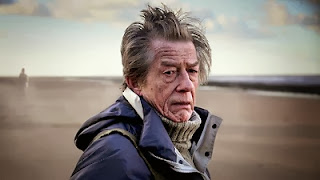 The cinematography courtesy of Rob Hardy effectively conveys Parkin’s isolation through carefully composed shots and framing. It also captures the haunting beauty of the landscape within which the story unfolds; windswept beaches, ragged cliffs and various other empty or sparsely populated spaces. The faded grandeur of the hotel, with its long shadowy hallways and draughty rooms, implies that it has fallen on hard times and, much like the characters of Parkin and his wife, is a shadow of its former self. The double room Parkin accepts serves to replace the unoccupied bed in James’s story, and Miller’s earlier adaptation, and it perfectly conveys the absence of his wife. When it comes to the moments of horror, de Emmony draws inspiration from sources as diverse as The Haunting and J-Horror titles such as Ringu and Ju-on: The Grudge. Unnerving moments come when Parkin awakens during a particularly stormy night to hear someone banging on his door. When the pillow he has used to plug the gap underneath the door is pulled through it into the hallway he sees a pair of hands appear and creep, spider-like, beneath the doorway. There is also some business involving a sinister looking bust of a woman’s head which glares at him from across the darkened room before he places it in the cupboard.

His isolation is enhanced by the hotel’s emptiness - not only is it off-season and manned by a skeleton crew, but after a particularly sleepless night he realises that he wasn't just the only guest, he was the only person in the building. John Hurt delivers an utterly compelling performance as the devastated Parkin, a man attempting to come to terms with his wife’s condition. Indeed, through conversations he has with the nurse in the care home and the sympathetic receptionist of the hotel, we learn he already believes his wife - more specifically, her personality and the things that made her who she was - has now gone completely and he is utterly alone.

'A body that has outlasted the existence of the personality; that is far, far more horrifying than any spook or ghoul that you could ever hope to glimpse, believe me.' 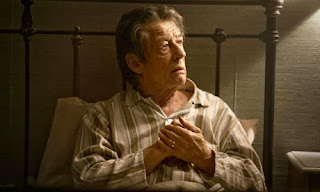 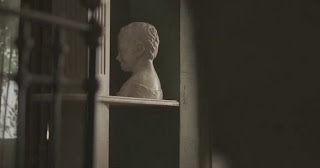 Miller’s adaptation was cunningly ambiguous, the haunting could have been the externalisation of repression and self-imposed isolation of the socially inept protagonist, and this version is just as ambiguous. The haunting could of course be supernatural, but it could also be a metaphor of sorts for Parkin’s guilt. The ending poses more questions than it answers: was Parkin’s wife merely attempting to convince him she was still trapped within her unresponsive and ailing physical body, or did her appearance at the foot of his bed in the hotel room contain more sinister intentions? Is she punishing him for leaving her in a care home? The exchange of glances between the wife and the nurse at the end implies perhaps she has been avenging herself for Parkin leaving her in the care of others. The ambiguity isn't as chilling as that of Miller’s earlier film, and indeed James’s short story, but the emotional impact it leaves in its wake is a resonant one, and the sense of tragedy and loss is where the power of Whistle and I’ll Come to You (2010) lies.
A Ghost Story for Christmas Adaptation Andy de Emmony BBC Ghost Story Haunting John Hurt Made For TV MR James Oh Whistle and I'll Come to You My Lad Whistle and I'll Come to You

Bryan Leigh said…
I was at first irritated by the 2010 version's plot overhaul. But I saw later that it hinges on a smart thematic twist: Parkins' atheism had been argued in philosophic terms on the grounds that a personality departed from a body, a ghost, is not a comprehensible "thing" that can be described and understood. The 2010 turn of the screw is Parkins' horror of "the opposite", his wife's personality, ghost in the machine, gone, leaving her a still, silent hollow body, a monument to herself and to their love far worse than a ghost. I was impressed by this idea, worked through so that Parkins is "punished", not for mistreating his beloved wife, but for believing she -- her soul/ghost/personality -- is gone.

On the other hand, dementia wards and senile care homes are not full of people sat still and silent. Dementia doesn't make you into a statue: dramatic licence to strengthen the empty body theme, but it grated on me.

Finally, we are not meant to draw firm conclusions about the events leading to Parkins' death; but ambiguity slips into incoherence at the end, in the care home. His wife lies abed crying; then she again sits silently with the other patients/residents; she then shows signs of animation; the nurse looks and seems to approve; the nurse immediately moves through the room -- and we see the wife's chair empty. For me, this sequence was obscure and I suspect not fully thought through.

Notwithstanding my quibbles, I felt the adaptation justifies itself, not least because it tapped into my own experiences of family dementia, which often seemed worse than ghosts.
21 May 2017 at 22:05