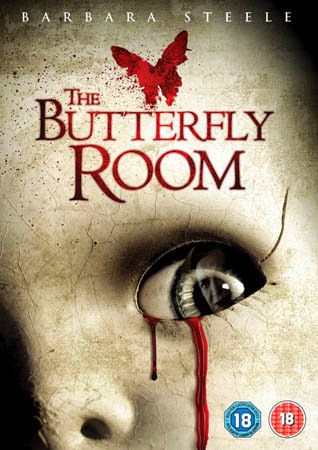 Featuring a strong female cast comprised of renowned veterans of the genre, The Butterfly Room is headed by the fabulous and formidable Barbara Steele (Black Sunday, Nightmare Castle, Pit and the Pendulum, Silent Scream, Shivers), who delivers a mesmeric performance as maniacal matriarch Ann. Mentally unstable yet strangely vulnerable, her vanquished relationship with estranged daughter Dorothy (Heather Langenkamp) drives her to weave maternal bonds around a young girl called Alice (Julia Putnam). It turns out enigmatic Alice is not what she seems though, and has a few dark secrets of her own. Shocking revelations push an already unstable Ann over the edge as she seeks to preserve her relationship with Alice at any cost...

With its mix of melodrama, Grand Guignol camp and tragic pathos, and its casting of a sensational older star of the silver screen in the role of a severely unhinged recluse, The Butterfly Room echoes 'hagsploitation' creepers such as Curtis Harrington’s Whatever Happened to Baby Jane and Robert Aldrich’s Hush, Hush Sweet Charlotte, which pitted Bette Davis against Joan Crawford and Olivia de Havilland respectively. At times it also recalls a twisted 90s psycho-thriller, right down to the LA apartment building setting complete with oddball tenants, such as Ray Wise as a sinister handyman. There are also sly nods to Italian thrillers and gialli of the 70s, with an abundance of close up shots of fluttering eyes anxiously peering through peepholes and cracks in walls. Had Zarantonello made this 40 years ago in his native Italy, it would now no doubt be regarded as a particularly twisted example of the giallo, with its slow-burn execution, embittered mother/daughter relationships, abrupt violence and jig-saw puzzle construction.

The fragmented, non-linear narrative pieces together the story and does so very precisely, ensuring there are no wasted scenes – every scene is relevant and adds intrigue and tension. The overarching theme of The Butterfly Room is that of suffocating motherhood and the kind of smothering maternal instincts that seek to preserve offspring in a stasis whereby they are always reliant upon Mommy Dearest. That Ann is an entomologist is no coincidence; with a room in her apartment given over to the collection and preservation of butterflies that she imbues with an almost sacred, ritualistic significance. We are offered glimpses of Alice’s various other surrogate mothers (including Camille Keaton, Adrienne King and PJ Soles) all completely oblivious to Alice’s manipulative nature. These moments are tinged with a desperate sadness; this young girl is exploiting loneliness. 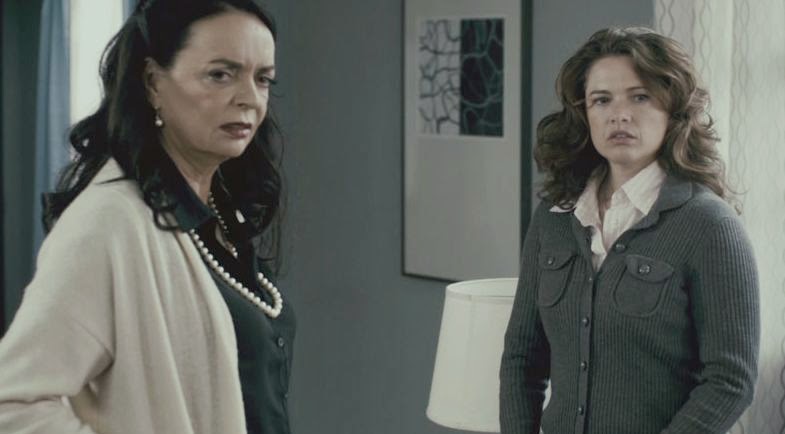 It is a real treat to see such veterans onscreen together in such a riveting, well written and tightly constructed film. Steele is as magisterial and commanding as she’s always been, and makes the most of this meaty role. As Ann’s traumatised daughter Dorothy, Heather Langenkamp is particularly affecting, with a performance full of nervy, raw conviction that echoes her similarly convincing performance in Wes Craven’s New Nightmare. When she and Steele are together onscreen, sparks fly, fangs are bared, old wounds are reopened, and blood is drawn. Elsewhere the likes of Joe Dante, Adrienne King, PJ Soles and Camille Keaton appear in smaller roles – each quite memorable in their own way - while Erica Leerhsen is suitably naive as neighbour Claudia, completely unaware of Ann's intentions for her young daughter Julie (Ellery Sprayberry).

Themes such as familial strife, domestic abuse and dysfunction underpin the tale, even in its more outlandish moments it is grounded in tragedy. The most chilling moment however, is reserved for the final scene, when the impact of an abusive familial background and the haunting legacy it has left behind becomes abundantly clear. The expression on Dorothy’s face leaves no doubt that history has a tendency to repeat itself and some scars may never heal…
Barbara Steele Dysfunctional Family Family Horror Heather Langenkamp Jonathan Zarantonello Monstrous Mother Psychological Horror The Butterfly Room