The Crypts of St Michan’s, Dublin 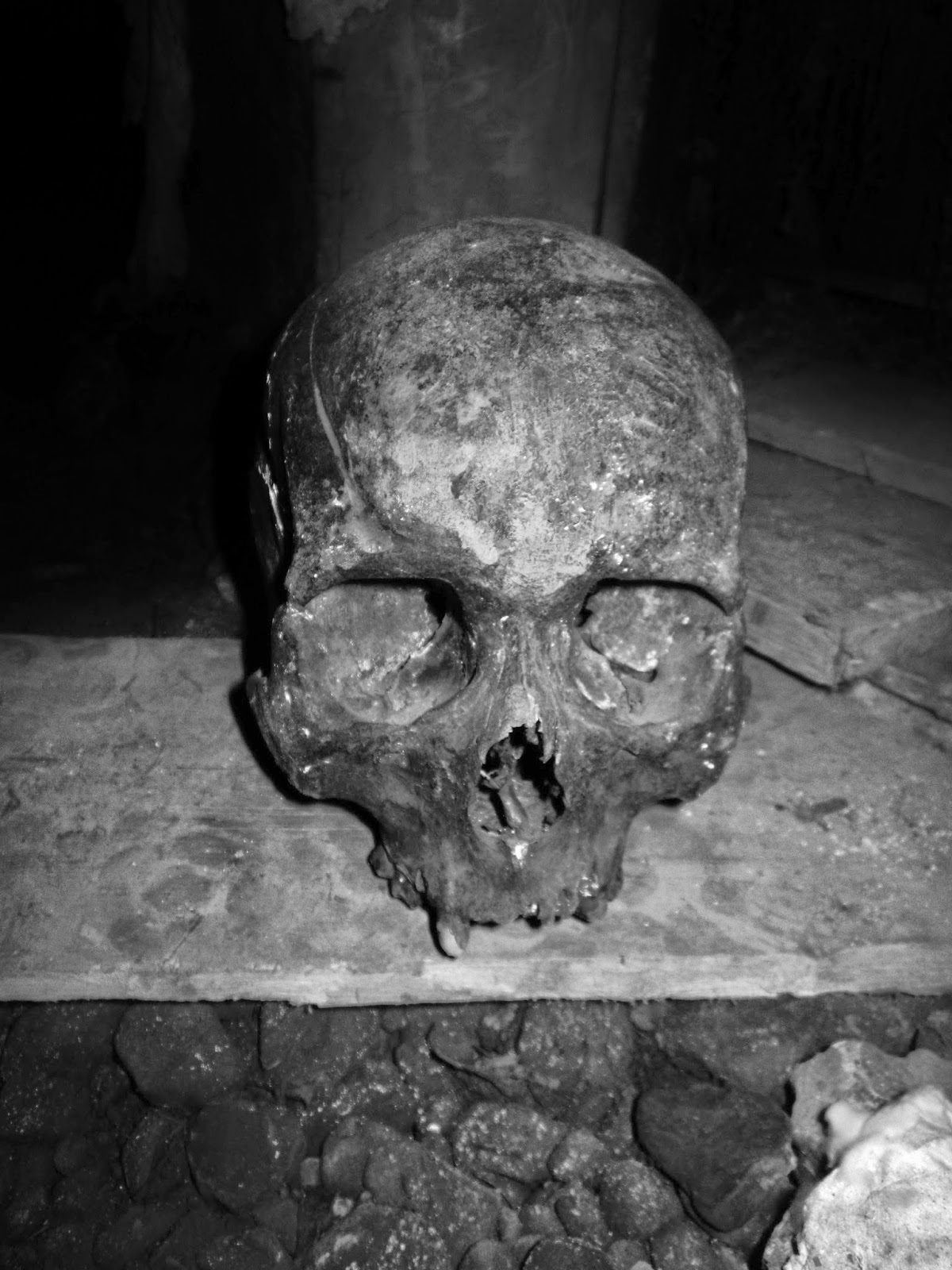 Located on Church Street in Dublin’s North Side, just a stone-throw from the dark currents of the Liffey, stands St Michan’s Church; the oldest parish church on that side of the city. Founded in 1095, and named after a Danish Saint, the present church dates from 1685 and still retains many of the features from this time, including its galleried interior and intricately decorated organ; upon which, according to local lore, Handel practised for his first performance of Messiah…

The crypts beneath the church are thought to have been created around the time of the 1685 renovation and they are the final resting place for many of Dublin’s most prominent and influential families from the 17th, 18th and 19th centuries. A combination of the limestone walls and methane seeping up into the air from the earth below is thought to have created the constantly dry atmosphere perfect for ensuring the preservation - mummification - of the bodies resting here. It is also believed that the church stands on the site of an ancient oak grove, and many myths attribute the preservation of the bodies to remnants of oak wood in the earth. While these conditions have preserved the bodies, the coffins haven’t fared so well and are in a slow state of decay. The church believes it would be inappropriate to break open the coffins, so it does what it can to preserve them. If and when one should open as it disintegrates, it is said that the body within has chosen to reveal itself…

Of course, a few of the eternally slumbering residents have indeed revealed themselves. Four bodies, collectively referred to as The Big Four, can be seen in the vault at the far end of the passageway; The Crusader, The Thief, The Nun and a woman spookily referred to by our guide as The Unknown. As her title would suggest, not much is known about her. Next to her lies The Thief, minus both his feet. It is believed his feet were removed so he could fit into his coffin (reminiscent of the grisly events in HP Lovecraft’s short story, In the Vault), and the reason he is called The Thief is because his right hand is also missing. In olden times this was a punishment for stealing. Given that he is buried under the church alongside some of Dublin’s most esteemed families and individuals however, it is thought he may have later atoned for his crimes and become a priest. Next to him lies The Nun, and like her fellow female crypt dweller, not much is known about her. 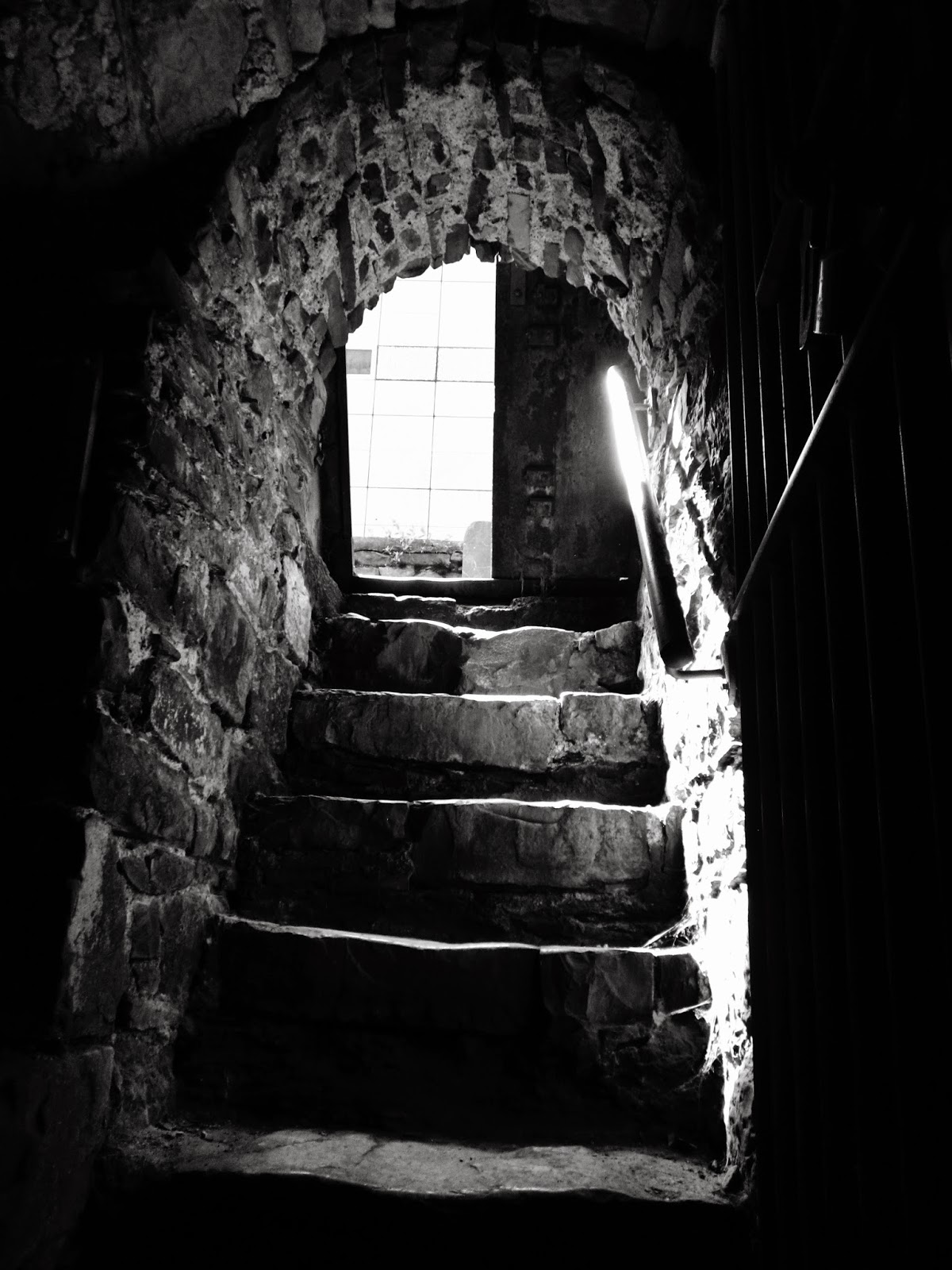 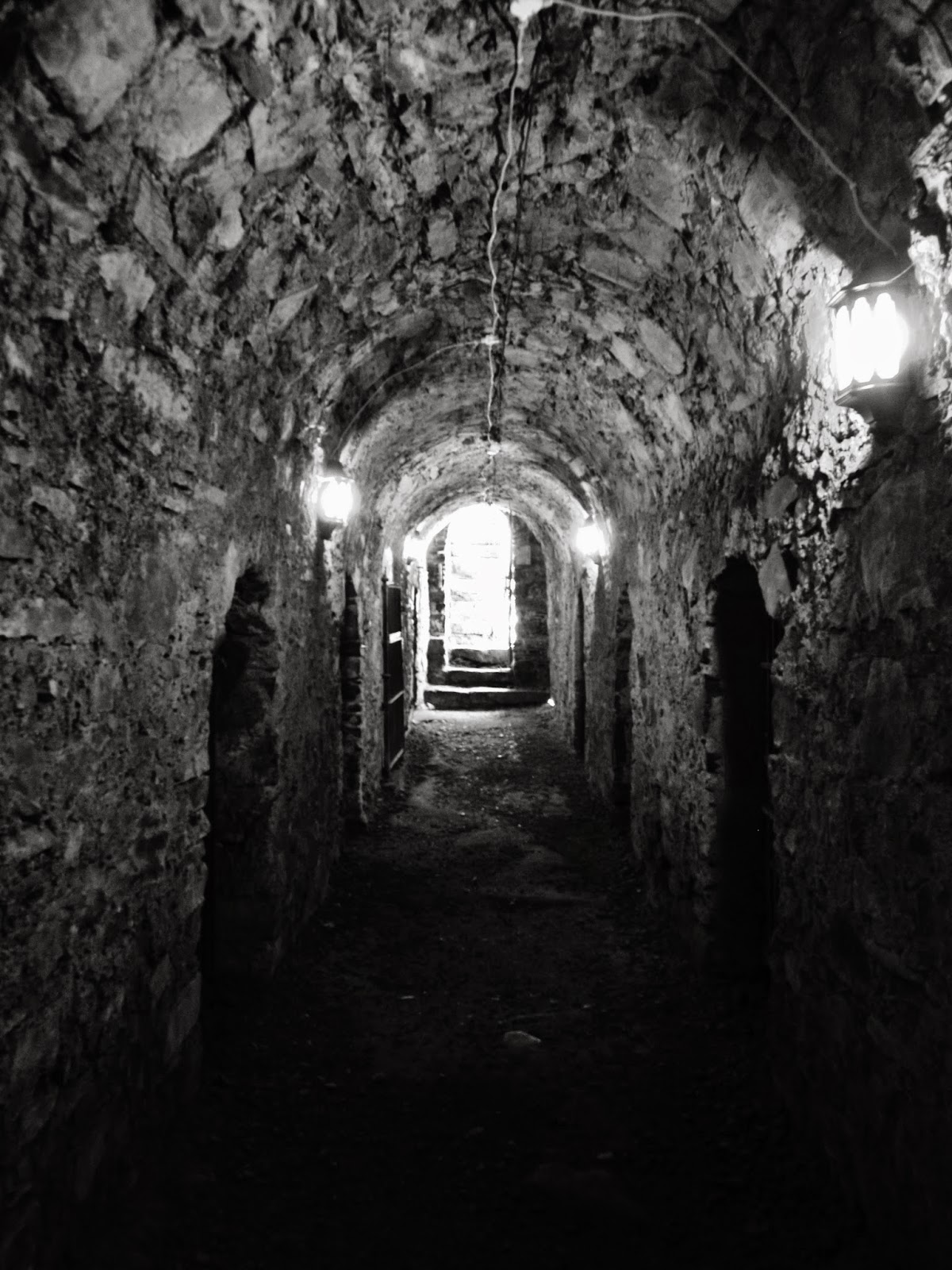 Set slightly apart from these three is the 800 year old body of The Crusader. Believed to have either died in the crusades of the 4th century, or shortly thereafter, The Crusader was, in his day, considered a giant among men. At six and a half feet, he was too tall for his coffin, and his legs were rather unceremoniously broken and folded underneath him in an effort to fit him into it. His hand appears to reach out of his coffin, revealing a grotesquely elongated finger pointing into the darkness. According to our guide, visitors were encouraged to shake the hand of The Crusader upon entering this section of the crypt. Nowadays, while shaking his hand is not encouraged, visitors are still invited to touch his pointing finger. Which of course, I did. Apparently it’s good luck, which is all well and good; I simply wanted to make contact with a mummy. 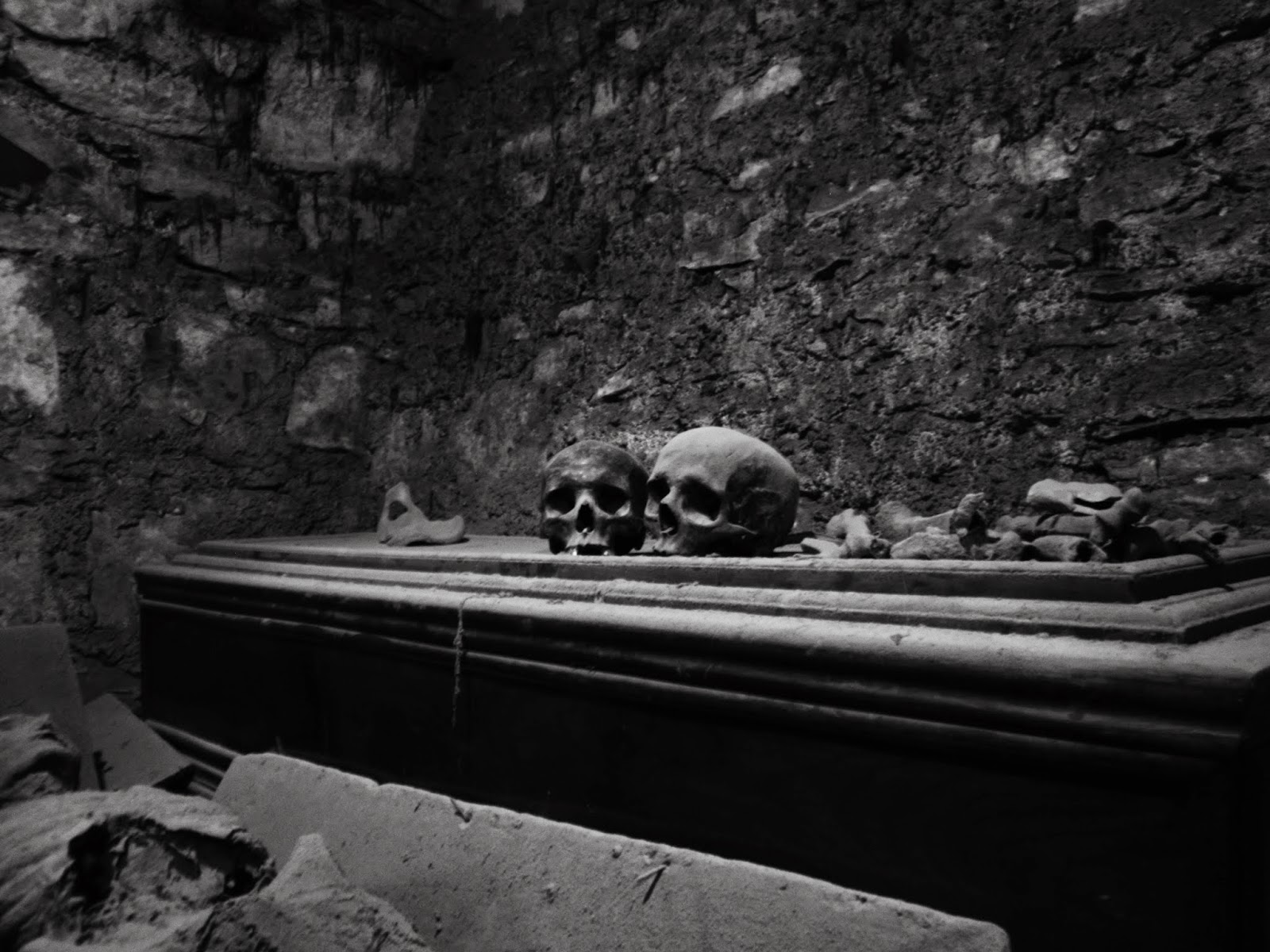 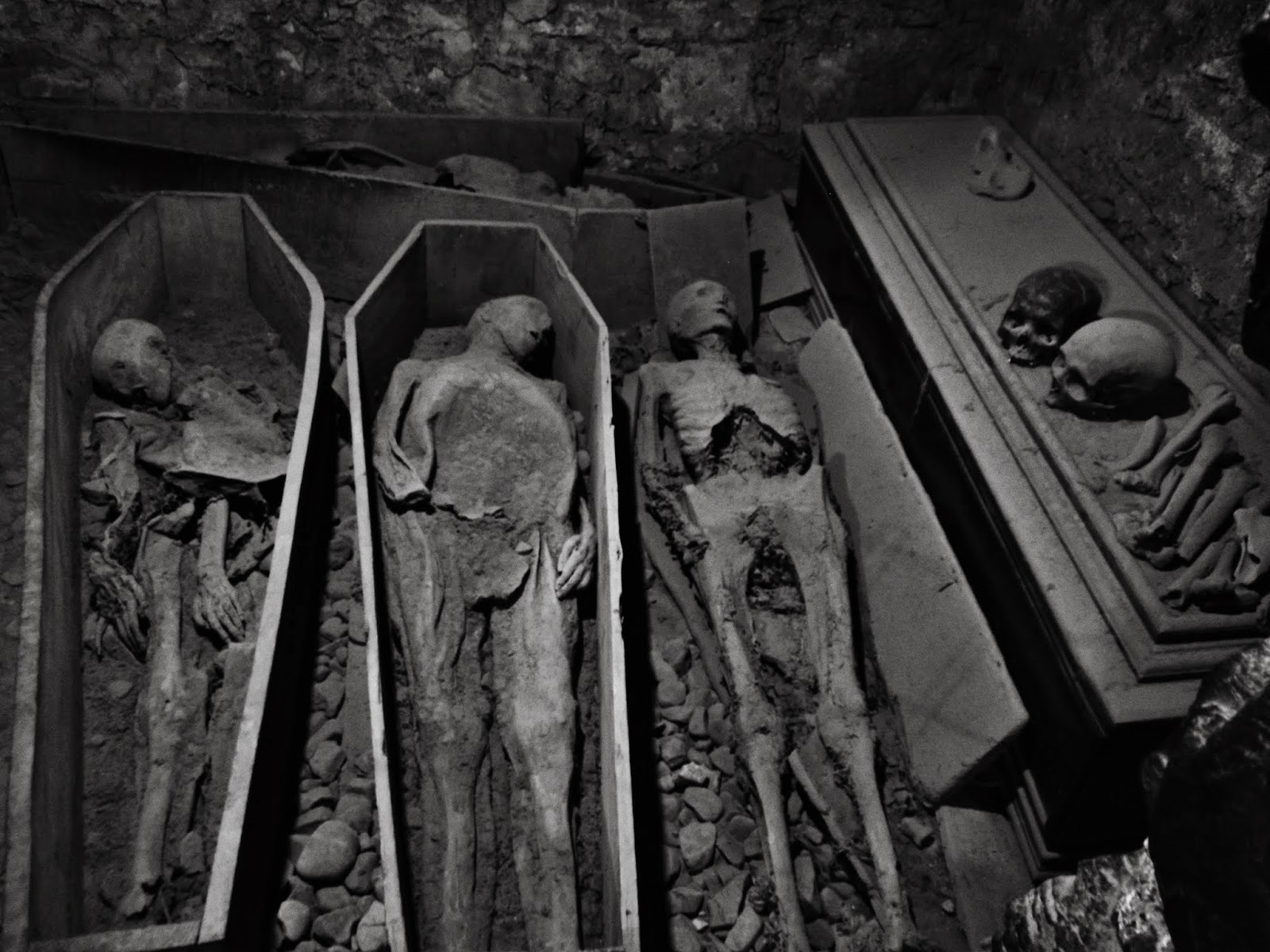 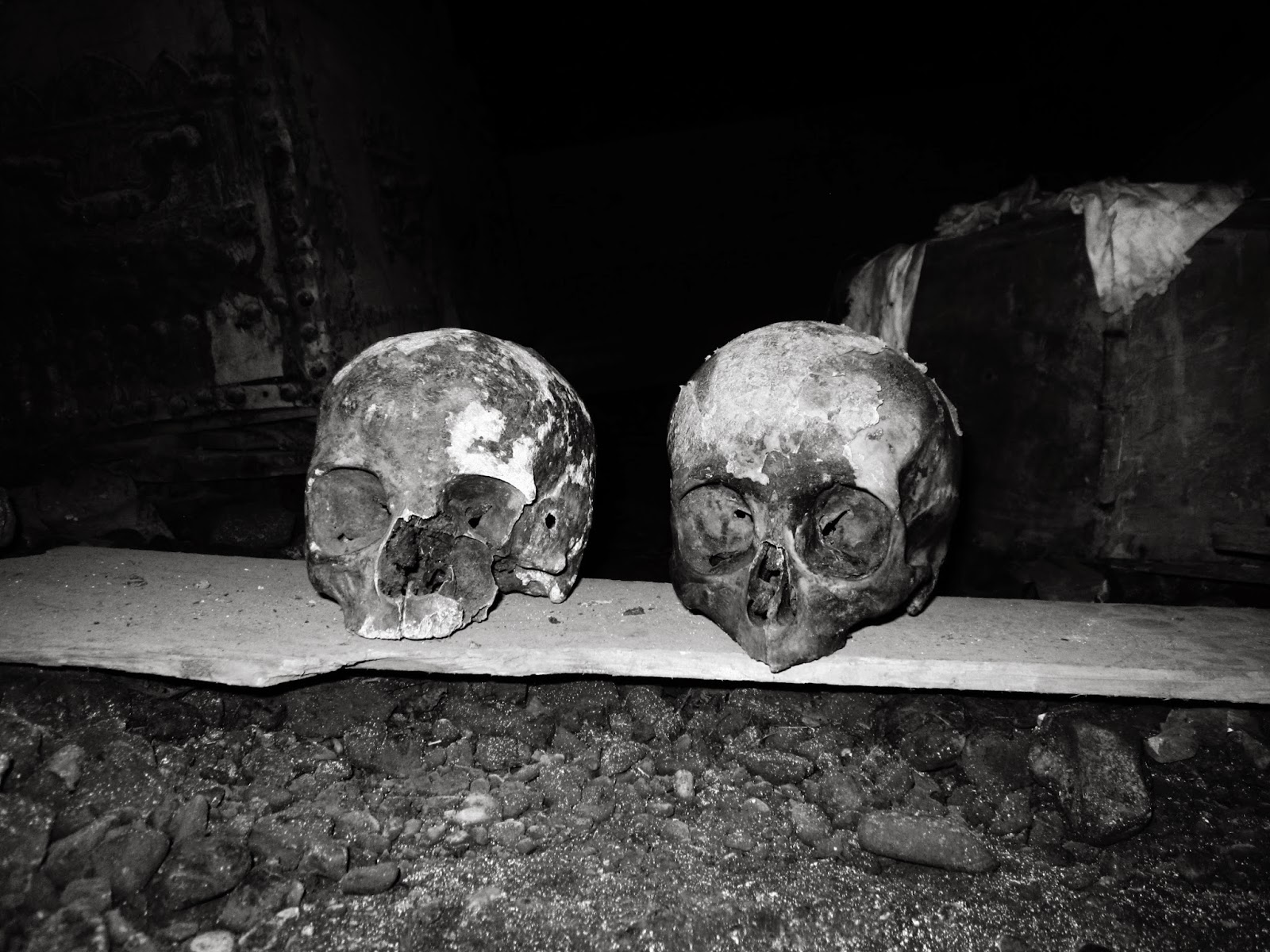 In one of the neighbouring crypts - there are five in total, all accessed through heavy iron doors in the graveyard above – lay the remains of the Earls of Antrim and the legendary Sheares brothers, prominent lawyers and members of the United Irishmen. Entombed along with the siblings is a parchment upon which is scribbled the gruesome instructions for their executions. For their part in the rising of 1798, the brothers were hanged by the British, but not until death. While still just barely alive, they had their intestines ripped out and set alight before their eyes. Only then were they put out of their misery by being quartered. 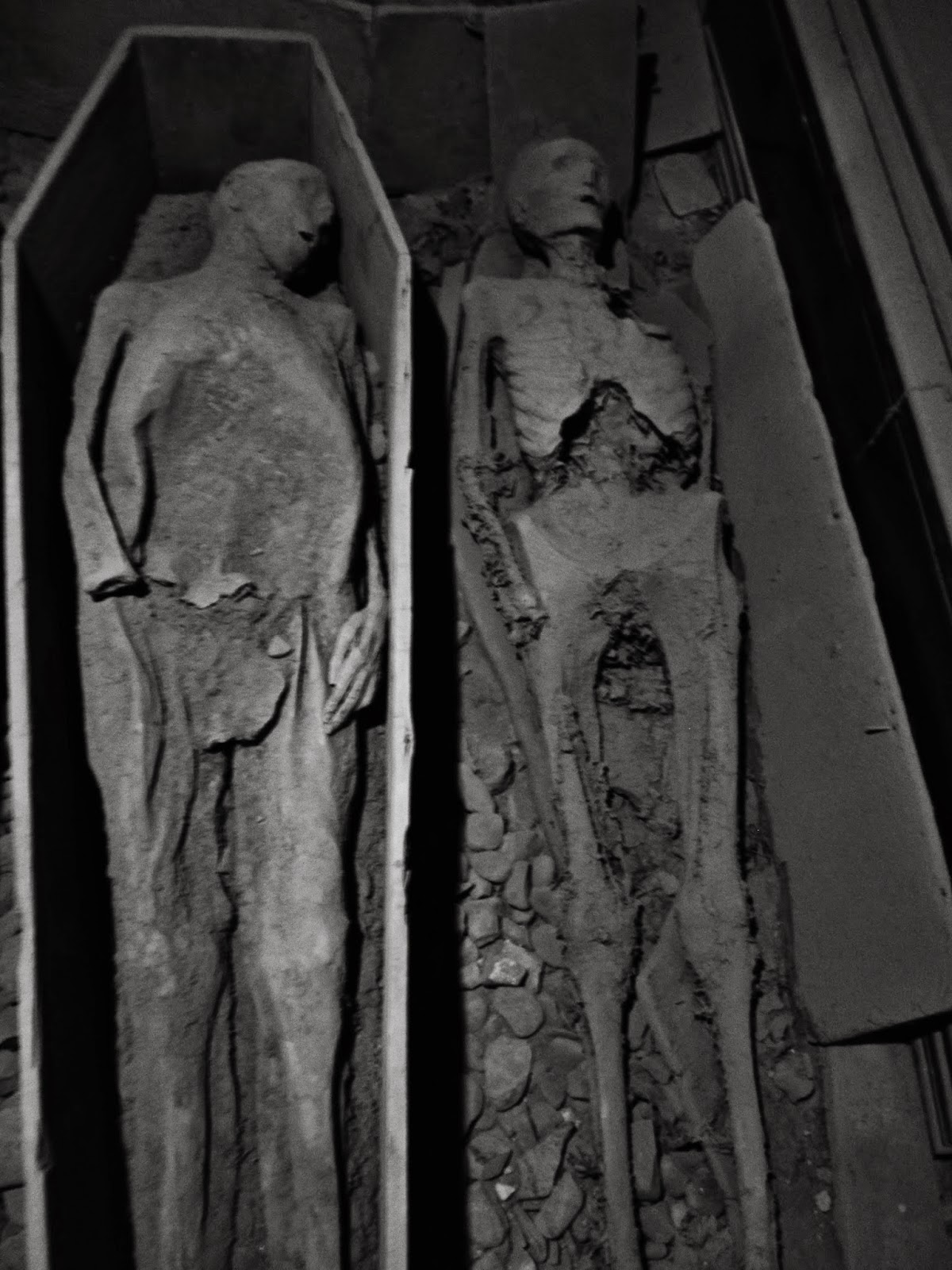 Since Victorian times the crypts have been something of a macabre attraction for visitors. Various skulls and bones still lay scattered on the dusty floors of some of the vaults; at one stage I noticed a jaw bone sitting upon a stone shelf next to my head in the shadowy passageway. It is believed Bram Stoker himself visited the crypts, and based on the fact that he makes specific reference to St Michan’s mummies in his short story Lost Hearts, I think it’s safe to say MR James also descended the cold, uneven steps into those darkened vaults to gaze upon the faces of the dead. In a particularly chilling passage in Lost Hearts, the young protagonist dreams of looking into an empty room on the attic floor of his cousin’s house, and catches a glimpse of a figure wrapped in a burial shroud lying in a bathtub. He suddenly awakens, only to find himself standing right outside the room from his dream…

That night he had a curious dream. At the end of the passage at the top of the house, in which his bedroom was situated, there was an old disused bathroom. It was kept locked, but the upper half of the door was glazed, and, since the muslin curtains which used to hang there had long been gone, you could look in and see the lead-lined bath affixed to the wall on the right hand, with its head towards the window.

On the night of which I am speaking, Stephen Elliott found himself, as he thought, looking through the glazed door. The moon was shining through the window, and he was gazing at a figure which lay in the bath. His description of what he saw reminds me of what I once beheld myself in the famous vaults of St Michan's Church in Dublin, which possesses the horrid property of preserving corpses from decay for centuries. A figure inexpressibly thin and pathetic, of a dusty leaden colour, enveloped in a shroud-like garment, the thin lips crooked into a faint and dreadful smile, the hands pressed tightly over the region of the heart.

As he looked upon it, a distant, almost inaudible moan seemed to issue from its lips, and the arms began to stir. The terror of the sight forced Stephen backwards and he awoke to the fact that he was indeed standing on the cold boarded floor of the passage in the full light of the moon…

When next you find yourself in Dublin's fair city, where the dead are so pretty, go to St Michan’s and set your eyes on the mummies there ‘neath it. And should you awake to find yourself still clutching the pointing finger of one of those ancient slumbering denizens, fear not. It’s good luck. 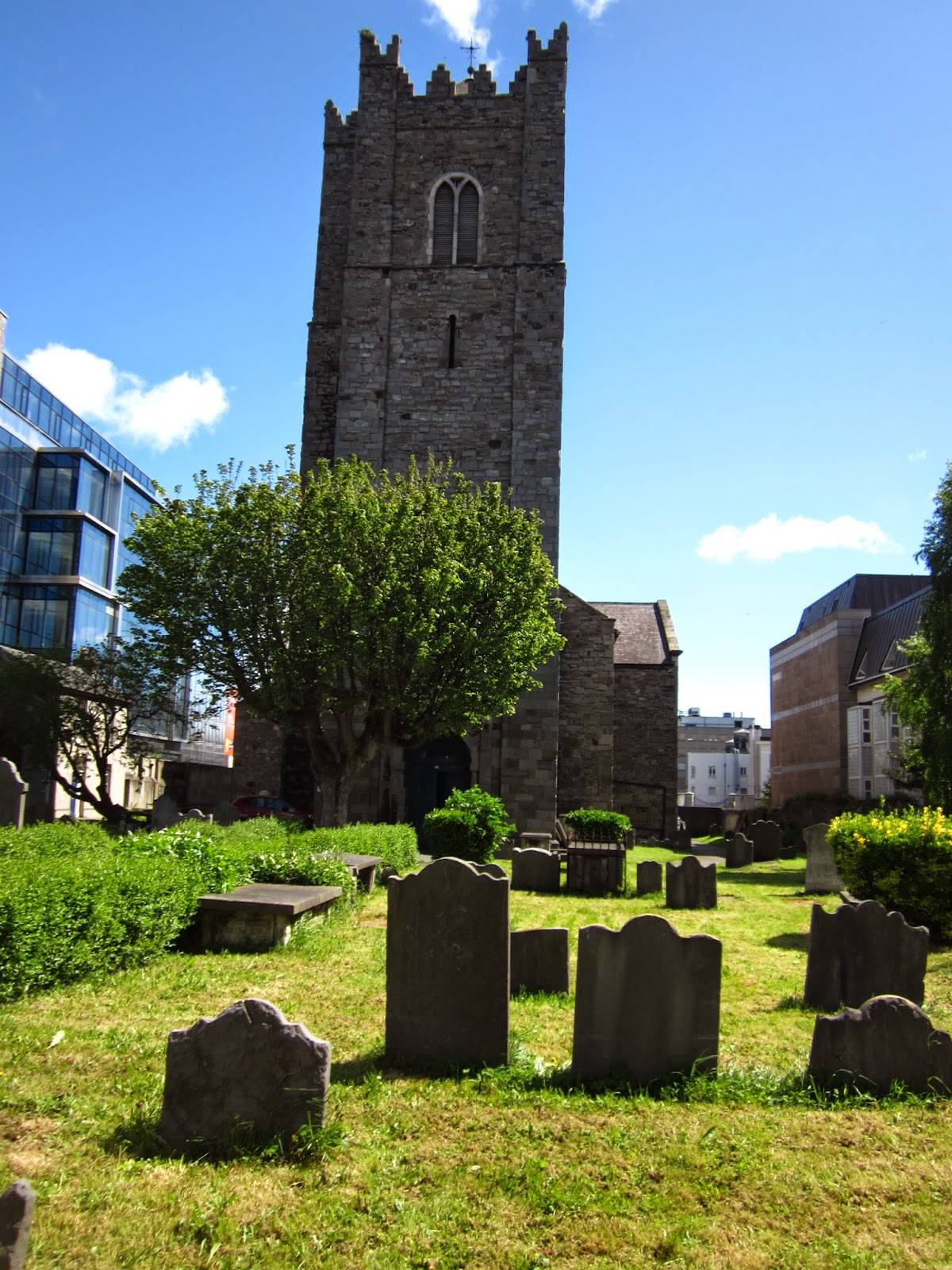 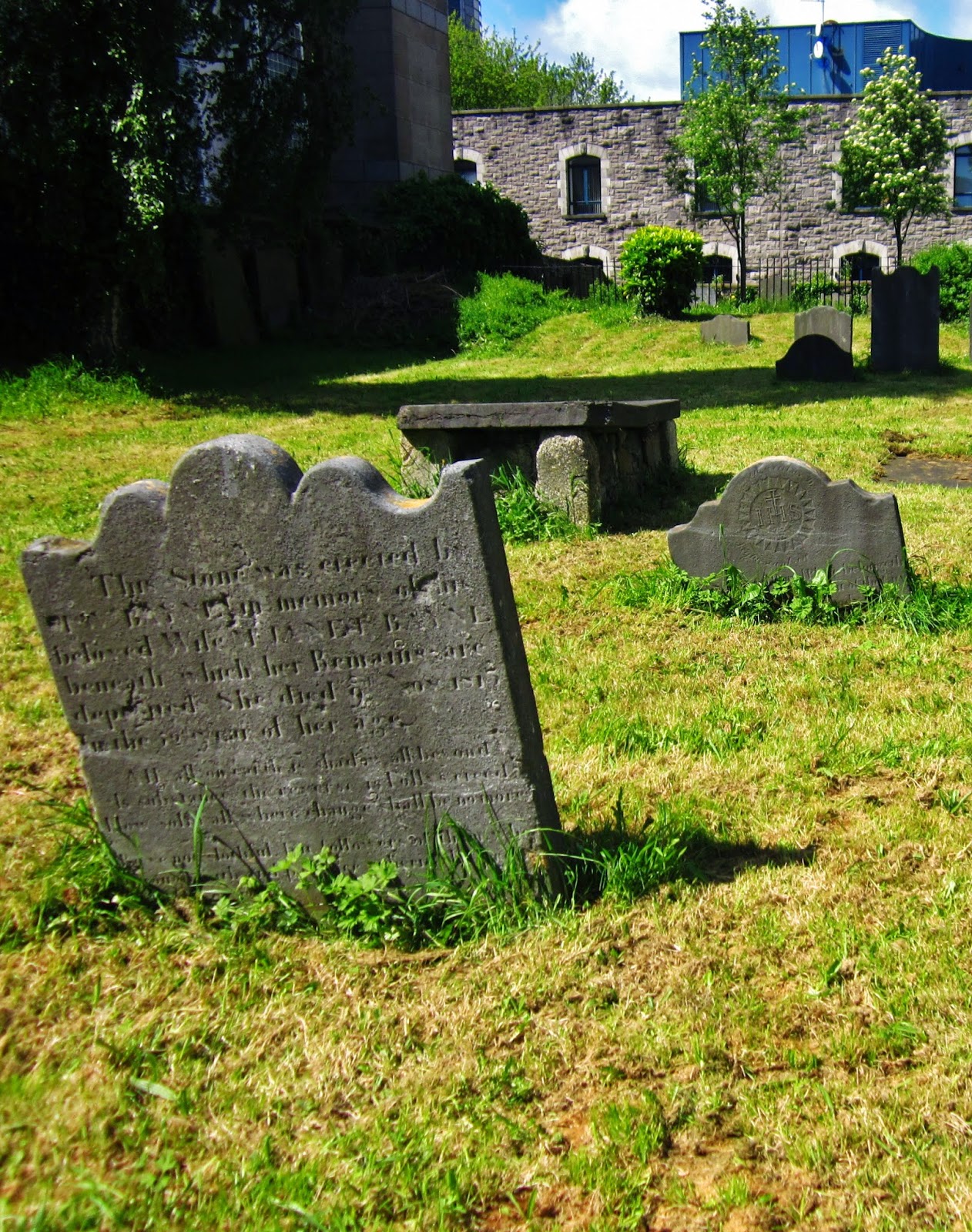 psynno said…
I remember when I visited as a child and there was some story the guide told us about the giant spiders which disappeared from the crypt - apparently an American tourist but his brolley through their web and the spiders never returned. The thought that Stoker was there is amazing. I remember more open tombs in Ireland.
Great article, James. I love these photos too.

James Gracey said…
That's an interesting tale about the giant spiders, Paul. The guide who showed me round didn't say anything about them, but I think if (when!) I go back, I'll be sure to ask about them. Can you remember anything else from when you were there? Did you touch the mummy's hand?? ;)
21 June 2014 at 12:39

psynno said…
Can't remember much about it, it was in the 70s. I'm sure i touched the hand, as it's done me some good. There is a comment online about the spiders and how the air quality preserves them and makes them grow larger, but i think they've left the crypt after that incident, the guide said. I must go back there when i next visit Dublin.
21 June 2014 at 14:21