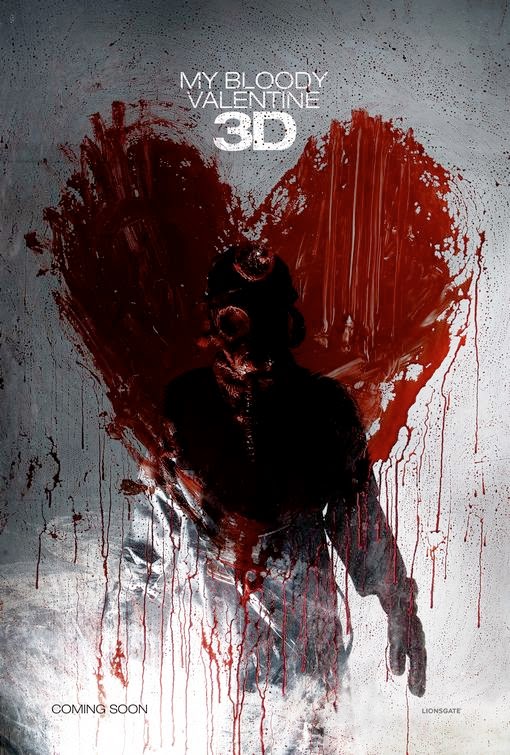 A remake of the classic 1981 slasher of the same name, My Bloody Valentine actually improves upon the original with a decent script, likeable cast (including Jensen Ackles, Jaime King, Kerr Smith and Tom Atkins) and buckets of atmospheric tension. While released well after the post-Scream slasher boom of the late nineties/early noughties, but in the midst of a (still on-going) classic horror remake phase, My Bloody Valentine attempted to set itself apart by filming in 3D - it arguably initiated the current trend of 3D films.

While it boasts irresistible retro-slasher leanings, it doesn't do so in a smug, post-ironic manner; it takes itself seriously and at its core is a decent mystery regarding the killer’s identity. Various red herrings are successfully established and Todd Farmer’s screenplay is mindful enough to examine the effect of the ensuing paranoia and mistrust on the residents of the small town community, vulnerable and isolated as it is. A number of scenes feature graphic violence but only after a satisfying build up of tension. Lussier has evidently applied his skills as an editor (he frequently edits films for Wes Craven) to his direction, as My Bloody Valentine has a number of highly suspenseful chase scenes. Like the original, it makes great use of its claustrophobic mine setting and also renders the work-places and homes of the townspeople unsafe spaces - a particularly effective scene plays out in the local supermarket after dark as two characters are menaced in the aisles by the brutal killer. A number of other set-pieces stand out, including the massacre at the motel and the scene in which Tom (Ackles) finds himself trapped in a storage cage as the killer closes in.

Like last year’s post-modern sequel to The Town That Dreaded Sundown, My Bloody Valentine takes time to examine the effect of tragedy upon the small town in which the bloody story unfolds. With the reports of the mining accident and the initial murder spree that stemmed from it (depicted during the opening credits) and the threat of the mine shutting down with the return to the town of its deceased owner’s son Tom, the screenplay touches on the plight of communities which rely on coal mining as their main economy. Interestingly, 2009 (the year the film was released) saw a massive fall in the production and exportation of coal in the US. Farmer’s screenplay depicts the dangerous conditions faced by coal miners on a daily basis and how working in such potentially volatile conditions can effect their health and mental well-being. Don't you just love slashers with social commentary! The strange sadness often inherent in small towns is also evoked, countered by a strong sense of place and community, and certain characters ruminate on past regrets (such as never having lived anywhere else), while Tom struggles to regain the trust of his community after leaving the town years prior in the midst of tragic circumstances. The result of this means we actually care for the characters, which works to up the tension when they come under threat. The varying dynamics between the characters portrayed by Ackles, King and Smith are particularly engrossing. Their shared history, which is of course complex, really works to flesh them out.

My Bloody Valentine is one of the better horror remakes of recent times, though for some reason it is always unjustly overlooked. With its small town setting, formidable antagonist, careful characterisation and frequently creepy atmosphere, it’s an effective update of the classic slasher film formula.
My Bloody Valentine Post-Scream Slasher Remake Slasher Stalk'n'Slash

Casserole said…
I rewatched it a while back, perhaps exactly a year ago, and I still find it incredibly bland and uninspired, plus very sleazy and cheap. I was never a fan of the original either. From what I heard, it was a hoot to watch in 3D though.
14 February 2015 at 21:35

James Gracey said…
I saw it in the cinema, and at the time I thought the 3D aspect worked quite well. Of course, it didn't really enhance the story, but Lussier certainly knows how to move the camera around and certain claustrophobic scenes, particularly those set in the dank depths of the mines, seemed to be even more effective (and immersive) because of the manner in which they were filmed.

In terms of it being uninspired, I would say, hey, it's a slasher film. Most of them are arguably uninspired, simply because they're so formulaic. There's little variation in terms of story, but that's actually part of the appeal. Slasher films are oddly comforting due to their adherence to convention and formula. They're usually judged in terms of tension and creative death scenes. I think My Bloody Valentine (2009) stands out because the plot is substantially more complex and there's more attention to characterisation than most slasher films - even more recent ones. I don't think it's particularly cheap, except for the aforementioned motel massacre scene in which one character suffers the indignity of being stark naked throughout. This is of course to add titillation (again, it's a slasher film) but I think it also underpins that particular character's fall from grace and heightens the sense of tragedy around her death.

I still believe this remake builds upon the original and emerges as a sturdy horror film that, certainly when compared to other remakes of the time, offers something quite robust and meaty. And I haven't even mentioned the twist ending... ;)

Shit Movie Fest said…
This is one of the few remakes I like just as much as the original! It boasts some great kills and a killer cast

deadlydolls said…
I really enjoy this one, and also had a great fully packed Friday night theater experience with it. It holds up on its own as just a fun slasher. The mystery is good, the acting is better than average for its type, the setting is different. It's not a classic, but it's super fun, and remains one of the best uses of 3D in a horror movie.
8 March 2015 at 21:21