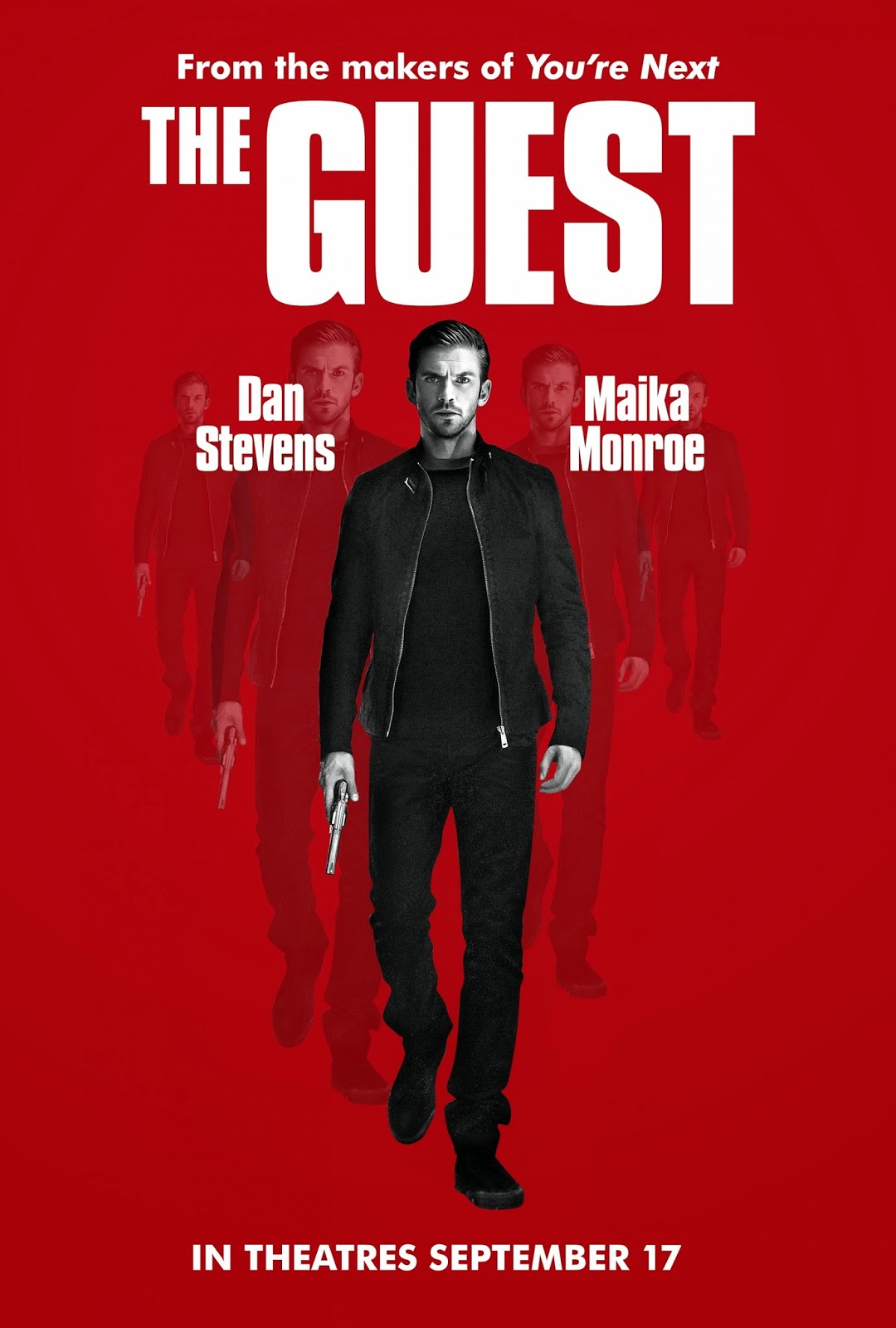 Following on from You’re Next and A Horrible Way to Die, The Guest is the latest genre-melding offering from director Adam Wingard and writer Simon Barrett. As with their previous collaborations, it fondly harks back to genre movies of yesteryear while slyly subverting tropes and conventions audiences are now all too familiar with. All bets are off as rules are bent, expectations toyed with, and the viewer is sucked into Barrett’s twisted and twisting story, which emerges as one of the most interesting - and entertaining - genre offerings of recent years.

The Guest begins as David (Dan Stevens), a recently discharged soldier, arrives at the home of a family still grieving for the death of their son, whom he claims to have been good friends with. David is too good to be true and represents something for everyone in the family, filling the role of their absent son. Only daughter Anna (Maika Monroe) is wary, but she fails to find anything to support her suspicious that he isn’t who he claims to be. Until it’s too late…

The Guest treads many fine lines and at several points threatens to dissolve into ridiculousness, but thanks to Wingard’s assured direction, Barrett’s lean, mean, darkly humorous script and pitch-perfect performances from the cast, it just about manages to stay on the right side and keep everything together; particularly towards the end, when some major gear changes occur. As the titular character, Dan Stevens is nothing short of mesmerising. From the moment he appears onscreen he effortlessly commands attention, and throughout the course of the tightly wound story he goes from being utterly charming to violently menacing in a single, fluttering heartbeat; his subtly nuanced performance and Barrett’s riveting screenplay taunt and tease with regards to his character’s mysterious agenda. At times it seems the story will take a ‘Cuckoo-in-the-nest’ turn, a la The Hand that Rocks the Cradle, The Stepfather and Pacific Heights etc., in which a psychotic stranger infiltrates and gradually picks apart a typical all-American family from within their own home, while the queasily tense opening scene hints at a home invasion narrative. The Guest isn’t that predictable though, and eventually takes a few very unexpected turns, ultimately revealing itself to be an irresistible blend of Halloween and The Terminator, with elements of The Bourne Identity and The Manchurian Candidate thrown into the mix.

A throbbing 80s-electro score pulsates throughout, not only providing the film with a strangely vintage feel, but enhancing the tension and calling to mind the similar-in-tone work of John Carpenter. Speaking of John Carpenter, there are various visual references to the Halloween series (particularly parts III and IV) throughout the production design.
Action-Horror Adam Wingard Family Horror Genre Cinema Indie Film Psychological Thriller Simon Barrett The Guest

Aylmer said…
Glad you liked this one as much as I did James. I gave it a glowing write-up too. Stevens really is incredible in it, isn't he? That ending too, wow.

Question about the plot and A MAJOR SPOILER for anyone who hasn't seen it:


David is programmed to tie up any loose ends relating to the military project. The family's dead son was also a test subject in the project. So is David there specifically to wipe out the family in case they start snooping around? Was it ever explicitly explained WHY he goes there?
10 February 2015 at 09:26

James Gracey said…
While I'd heard good rumblings about this one, I deliberately avoided reading up on it and didn't really know what to expect. I absolutely loved it; especially Stevens' performance and the throbbing electro score. I've seen a few of Wingard's films now and reckon I'll feel pretty excited when he announces his next project.

And that's an excellent question! I came to the conclusion that he'd gone there to scope out how much they knew, or suspected, about their son's death. Or, maybe, whatever remained of his humanity drove him there? I don't remember the script really getting into why he was there. Hmmmm. Something to ponder, I guess. And hey, it's another reason to see this one again. :)
10 February 2015 at 16:11

Aylmer said…
Hmmm, that's more or less the conclusion I came to as well. I thought I might have just missed something in the script, but I doubt it. I think it was deliberately ambiguous, which is a good thing. And yeah, the score was great, DAF, Sisters of Mercy and that killer track over the end credits!
11 February 2015 at 14:36