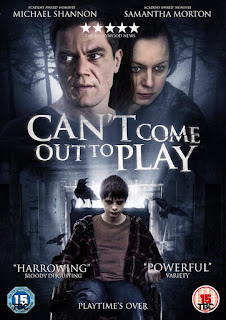 A couple who attempt to keep their sick son in a completely secluded environment for the sake of his ailing health, find their rigidly controlled and isolated lives intruded upon by a recently orphaned young girl who moves into the house down the lane. What follows is a tale of domestic abuse, desperation and the exhumation of dark family secrets.

An intense domestic psychodrama featuring disarmingly powerful performances from Samantha Morton and Michael Shannon, Can’t Come Out to Play is director John McNaughton’s first feature film in over a decade. While certainly a much more subtle affair than previous offerings such as Henry: Portrait of a Serial Killer and the sublimely trashy thriller Wild Things, it’s no less provocative or compelling.