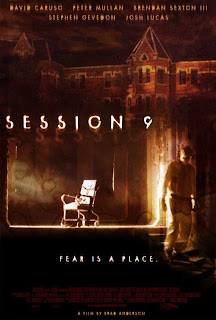 An asbestos removal firm headed by harassed and down-on-his-luck Gordon (Peter Mullan) begin working in an abandoned psychiatric hospital. Under pressure to get the job finished in as little time as possible, the close-knit group begin to fracture and unravel as the oppressive atmosphere of the building entwines itself with their already troubled and fragile psyches, leading to the unveiling of sordid secrets, mental break-downs and murder…

In the wake of films such as The Blair Witch Project (1999) and The Sixth Sense (1999), many horror films utilised a more subtle approach in their efforts to terrify and extract more cerebral chills. The ‘less is more’ approach of film makers such as Val Lewton is strongly evident in Session 9, a film that perversely revels in its icy suggestiveness and shadowy menace.
Even without showing us something scary, Anderson conveys a particular tone of psychological horror in much of the dialogue: characters discuss the fact that many of the former patients return to dwell in the empty building from time to time: lost souls in a frantic world that has neglected and abandoned them; they talk about some of the barbaric treatment of the patients and how brutal procedures such as lobotomies were performed; at one stage one of the characters likens the shape of the hospital to a giant bat – the closer towards the tips of the wings, the more dangerous and insane the patients that used to dwell there were. These vivid and highly evocative exchanges conjure all manner of horrific and profoundly hair-raising imagery within the viewer’s head.

The look and feel of the film is obtained through the use of actual locations, hand-held camera work, subtle lighting and strong performances from a robust cast including David Caruso, Josh Lucas, Brendan Sexton III and co-writer Stephen Gevedon.

The bleak mood of the film seeps with a foreboding dread and hopelessness that curls up in the gut and silently churns the stomach.
It is perhaps the stillness of the film that unsettles the most: long, static shots and languidly fluid camera movements ensure the dark events uncoil effectively and register in your perception much more insidiously. At times the mood inside the old building is suffocating, and even the brief forays into the outside world offer no consolation, as sun dappled and eerily calm as they are. Indeed, much of the film plays out under the glare of the sun or the lights the men use: the fact that these moments are just as creepy is testament to Anderson’s restrained direction and the overwhelming moodiness of the location. 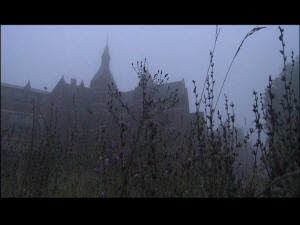 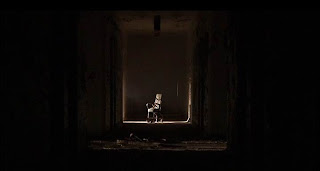 The building, the Danvers State Hospital, where events in the film unspool is essentially a character in its own right: a vast and sprawling abandoned psychiatric hospital that looms menacingly up out of its wooded surroundings. As the characters explore the intimidating depths of its bowels, we see all manner of horrific and archaic medical instruments and apparatus lying quietly disused in the overbearing stillness of the place. It is the actors’ reactions to their surroundings that helps enhance the effectiveness of Session 9’s creepy mood. Apparently director Brad Anderson used to drive past the disused building on his way to work and it began to force its way into his thoughts and dreams and he basically wrote the story around the building.

Each of the damaged characters harbours a dark secret and could potentially be pushed over the brink of sanity. Anderson cuts no corners and ensures that each character is fully fleshed out and believable. It is quite alarming to watch as the tight bond that tied this group of hard working blue collar friends and co-workers together, begins to fray and completely disintegrate. Tempers boil and personal grudges ripple darkly to the surface.

One of the most discomforting and downright bloodcurdling scenes occurs when Josh Lucas’ crafty character Hank returns to the asylum at night to retrieve a stash of antique coins he discovered in one of the cremation furnaces. The only sound we hear is the muffled jazz music from Hank’s earphones against the deafening silence of his surroundings. As he makes his way quickly back out of the building and along the divided corridors, he becomes aware that he is not alone. The panic that ensues is unshakable. Things become even more unnerving when Lucas finally shows up in the asylum again later on in the film after his ‘disappearance.’ 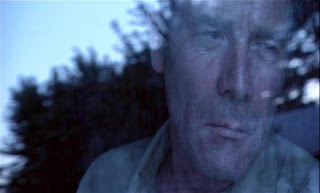 Another standout moment occurs when Jeff, a self-proclaimed scotophobic (fear of the dark) is left working alone in a long subterranean corridor lined with overhead lights. The generator burns out and Jeff watches in abject horror as the line of overhead lights begin to flicker off, one by one, before he turns and flees up the corridor seemingly chased by the merciless and all-consuming dark behind him.
The winding story twists and turns and musters a deft and haunting ambiguity as it coils tighter and tighter towards its inevitably dark dénouement. 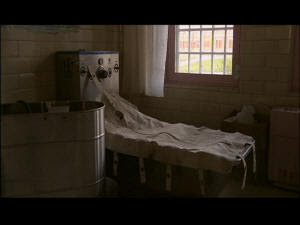 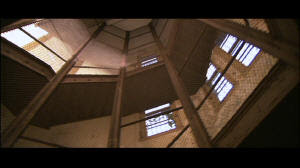 The title of the film refers to a collection of tape cassettes containing recordings of a psychiatrist’s interview sessions with one of the former patients, a multiple-personality case.
On discovering the tapes, law school drop-out Mike becomes obsessed with the case of this particular patient and spends more and more time alone in the basement listening to the interviews and more detached from his work and colleagues. By the time we reach the ninth session tape, things reach the pinnacle of their increasingly devastating downward trajectory and all hell breaks lose.

Excerpts of the distorted interview sessions worm their way into the films soundtrack and even further into the viewer’s ears with their haunting and disturbing ambiguity. The disembodied voice is eerie enough on its own, but the words it utters to describe the dark events leading to its speaker’s mental breakdown are undeniably chilling.
The haunting soundtrack, courtesy of the ever experimental Climax Golden Twins, consists of moody and sparse piano compositions played out over ominous, rumbling and echoic sound-scapes. Spine-tingling and utterly unsettling.

dylan said…
I love this movie and I've only seen it a handful of times. I think reading about it here will motivate me to make a purchase.
26 March 2009 at 00:12

James Gracey said…
cheers Dylan. I also love it - i watched it a few years back when my flatmates went out and i had the house to myself. i'm not asshamed to say i was a little unnerved by the experience! which was obviously good as i later bought it on dvd.
:)
26 March 2009 at 18:50

Cody said…
Just reading your review of this was enough to make my eyes water and goosebumps ripple across my skin. Session 9 may be the most frightening film I've ever seen. One of the very few that has ever actually scared me - just thinking about some of the scenes is enough to give me the heebie jeebies.
20 March 2011 at 03:27