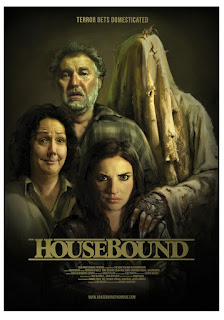 When delinquent Kylie is placed under house arrest after a botched robbery, she is forced to return to her childhood home and the guardianship of her overbearing mother and timid stepfather. A series of strange occurrences lead her to suspect the house is haunted and as she delves into the building’s history, she not only uncovers a darkly tragic past, but shady family secrets.

Beginning as an oddball haunted house yarn, the plot of this New Zealand comedy-horror soon veers off into some very unexpected places; with each twist and turn the well measured pace and careful editing gradually build tension and intrigue, ensuring the viewer is riveted throughout.

A rare gem in genre cinema, Housebound is a comedy-horror that provides well timed laughs alongside genuine shocks, chills and suspense, sometimes in the same scene.

Ms Misantropia said…
I really liked this movie, it was fun. "What we do in the shadows" is also a recent funny "horror" movie from down under.
3 August 2015 at 14:37