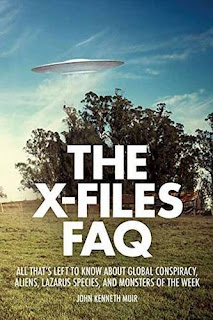 The X-Files FAQ by John Kenneth Muir (author of, amongst a staggering array of other titles, The Unseen Force: The Films of Sam Raimi, Eaten Alive At A Chainsaw Massacre: The Films of Tobe Hooper, Wes Craven: The Art of Horror, and Terror Television: American Series, 1970-1999) is an in-depth exploration of Chris Carter's phenomenally popular cult 1990s science-fiction TV series.

Muir's book explores the series in terms of its historical context - the Clinton era - and how this influenced the myriad story-lines involving conspiracy theories and a deep mistrust of the US government. The author looks at the show on a season by season basis, explores its key episodes, overarching themes and concerns, its creators, antecedents (Kolchak: The Night Stalker), descendants (Fringe), spin-offs (The Lone Gunmen) and cinematic outings.

The X-Files FAQ is an indispensable tome, not only for new fans of the series, but for established aficionados and anyone considering revisiting the series; a much less daunting prospect with John Kenneth Muir as your guide. As someone currently re-watching The X-Files (I’m a few episodes into season 8 now) I’ve found Muir’s book to be consistently entertaining and revelatory.