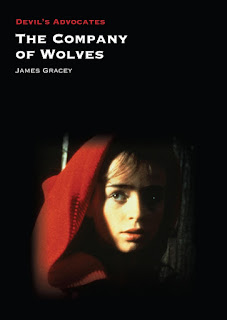 The latest review of my Devil’s Advocates book on The Company of Wolves comes courtesy of the lovely folks over at Warped Perspective (formerly Brutal as Hell). And I’m absolutely delighted that it’s another good one! According to critic Keri O’Shea, book is ‘lucid, detailed and meticulous, with exhaustive knowledge of the film, its inception and its interpretation [...] effectively crosses the divide between academia and fandom.’

I’ve copied the full review below, and you can also check it out (along with a wealth of other film related reviews, news and features) over at Warped Perspective.

The Company of Wolves (1984) really is a force of nature – a vivid array of stories-within-stories which capture the insurrectionist tendencies of Angela Carter’s book, The Bloody Chamber, a collection of familiar fairy stories reworked into unfamiliar forms. The film brings several of Carter’s tales to the screen, albeit via a new, modern framing device, one which links the humdrum with the imaginative, showing ways in which these two states overlap and influence one another. Ambitious, aesthetically-pleasing and intricate, it’s a film which has a diehard fan base, but perhaps has always struggled to attain the audience – or the appreciation – it merits, coming as it does at the tail-end (pun noted) of a number of grisly werewolf flicks and a growing appetite for the gory, not the Gothic. But there’s much to reward the viewer in The Company of Wolves, and now – with James Gracey’s book about the film – it yields up more still in this observant and scrupulous study.

Noting that the film appeared after a brief but significant werewolf phase in horror cinema, with the likes of An American Werewolf in London and The Howling still fresh in audience minds, Gracey sets out just how different The Company of Wolves was to these films (and, later in the book, how disastrous marketing strategies mis-sold the film as another grisly werewolf horror, to the probable disappointment of many viewers). Repositioning the film as a richly symbolic piece of work with a novel attitude to female sexuality at its core, Gracey is primed to explore the history of the project before contextualising both the film and The Bloody Chamber with a series of thought-provoking appraisals.

After an enlightening warts-and-all retelling of director Neil Jordan and author Angela Carter’s meeting and involvement in the project – theirs was a close, fruitful but occasionally rocky relationship – and some interesting facts (like Andy Warhol being the original choice to play the Devil) Gracey moves onto an important contextual consideration of the film: the history of storytelling. Oral folklore existed in various forms for hundreds of years before anything was written down in even a rudimentary form, but in the last couple of centuries, folklorists have taken an interest in what these stories can tell us about the mores of their times: as well as what’s in the tales, there’s an increasing regard for what gets left out, when, and why. For example, the Brothers Grimm, who believed that maternity was tantamount to an exalted state, turned a lot of malign mothers into the proverbial ‘wicked stepmothers’, even if there was no suggestion of this in their source material.

The book then moves on to a specific tale, one usually now known in English as Little Red Riding Hood. This story has especial significance within The Company of Wolves, where its scope for sexual subtext is inverted and called into question (and call me naïve, but I never twigged that this story had any sexual undertones whatsoever until I first saw the film!) Gracey talks us through a number of interesting variations on this story through time, conservative and otherwise. Over the years, little girls have fought back or embraced their fates, wolves have turned into ogres, and the moral of the story has shifted. Charles Perrault, in the 17th Century, made his Petit Chaperon Rouge a deeply moral tale which warned young girls about ‘stranger danger’, particularly men, implying that girls who fraternise with strangers deserve whatever they get. 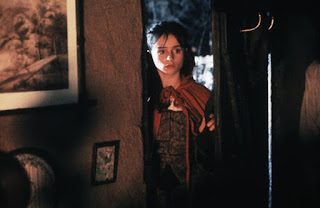 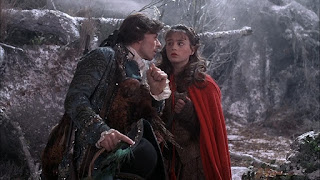 Carter, in her short story The Werewolf, definitely pulls this version of the story into pieces, and along similar lines The Company of Wolves playfully inverts the vulnerability and innocence of Red Riding Hood, making the story of a girl endangered in the woods into a coming-of-age yarn where it’s the girl who finally prospers. Gracey also takes a look at the cinematic legacy of this particular tale, noting other ways in which it’s been adapted to tell us (or warn us) about different things. Along the way, there are effective and reasoned put-downs of those critics who wouldn’t accept the work Carter did in destabilising old tales of damsels in distress in her own work.

The book also offers detailed comment on the film’s use of symbolism, its impact on cinema and its legacy in film (the likes of Pan’s Labyrinth, for instance) and of course an engaging chapter on lycanthropy. This section of the book eventually brings us full circle, discussing the history of lycanthropic cinema, but before then we go back to the origins of the werewolf myth and its evolution through literature – noting that male and female lycanthropes have tended to receive very different treatments, something which has seeped into cinema, too.

Gracey’s writing is on point from the very first here; lucid, detailed and meticulous, with exhaustive knowledge of the film, its inception and its interpretation. However, this requires a similar familiarity with The Bloody Chamber, so Carter’s ability to interrogate old tales (Gracey calls her “deconstructive and transformative”) forms the backbone of this appreciation of the film. An able defence of Carter’s approach feeds into a worthwhile appreciation of The Company of Wolves, all the while with some nice turns of phrase; cinematic conventions surrounding the werewolf are described as ‘congealing’ in popular culture, for instance.

Academic film writing is nothing new, and as Film Studies as a phenomenon continues to grow, more and more academic writing will appear to map out hitherto less-noteworthy films and genres. However, film writing which effectively crosses the divide between academia and fandom is still rare. Happily, two of the books I’ve read so far in the Devil’s Advocates series fit the bill, and James Gracey’s book is one of these. Is that important, if this book is targeted more at students of film (coming via Auteur Publishing) than casual readers? I’d say yes, it is, as someone coming to a film like The Company of Wolves for a purely academic exercise would fall flat. Yes, the language here is highly formal and it’s a studious book in tone, but there’s still the sense of a dedicated film fan couching something they love in academic language, rather than an academic trying to dedicate their attentions to an interesting film. This book remains accessible, provides ample food for thought and never strays into abstraction; perhaps more importantly, it makes a compelling case for giving The Company of Wolves the credit it so richly deserves.


Pick up a copy of book from any of these fine places: