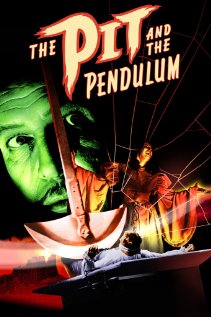 The Corman adaptations of various Edgar Allan Poe stories were perhaps some of the first horror films I ever watched as a youngster. Staying up late and secretly watching the little portable TV in my room, with the light on of course, I often discovered these lurid gems of the genre from between my fingers. None however had more of an impact on me than Pit and the Pendulum. It still retains the ability to chill and unsettle in its own unique way. Watching it is pure nostalgic bliss. Adding to the nostalgia and the bliss is the fact that the film stars Vincent Price AND Barbara Steele - and anyone familiar with Behind the Couch should know by now that I LOVE this diabolical duo.

The film is teeming with memorable and startling images, from the moody opening shots depicting a young man making his way along a harsh and craggy shore to an imposing castle in the background, to the warped and dreamy flashbacks and the images of prematurely entombed bodies. Many of these images, particularly the opening shots, seared themselves into my mind. And nightmares. A bleak and mournful atmosphere is instantly conjured and sustained throughout the rest of the film. The creepy score played over the title sequence (eerie shots of multicoloured and lurid liquids gloomily swirling around) of reverberated echoes and distorted, clacking strings is still haunting and unsettling today.

The story itself shares little in common with Poe’s tale, save for the titular torture device used in the finale and the overwhelmingly bleak and hopeless mood.
Writer Richard Matheson would elaborate extensively on Poe’s short story (essentially a mood piece in which the narrator relays his torture during the Spanish Inquisition where he was interred in a dark pit and menaced by a slowly descending bladed pendulum), creating a dark Les Diaboliques type tale involving a melancholy nobleman losing his mind because of the apparent death of his wife. It becomes apparent that he is actually being manipulated from beyond the grave by his wife and her lover.

Francis Barnard (John Kerr) makes his way to the home of his late sister Elizabeth (Barabara Steele) to meet her husband Nicholas Medina (Vincent Price) and learn more of her death. Whilst there he witnesses Medina slowly sink into mourning and insanity as his sister Catherine (Luana Anders) helplessly looks on. Francis soon begins to realise, Elizabeth’s death was under mysterious circumstances and all is not as it seems… 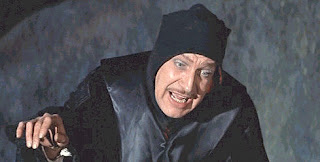 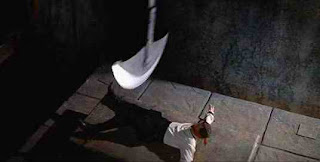 The film has a few interesting notions of the idea of history repeating itself and the theme of hereditary fanaticism and sadism. Like many of the Poe adaptations, Pit and the Pendulum provides a portrait of the inescapability of one generation from the sins of their forefathers. Medina is still plagued by nightmares of his sadistic father torturing and killing his mother and her lover. Events hang heavy under an oppressive notion that one cannot escape from the past and must spend their lives living under its shadow.

This film belongs to Price. He not only steals every scene he appears in, he seizes it in his grasp and commands our attention. That he still manages to gain the sympathy of the audience speaks of his power. When Medina discovers that Elizabeth may have been buried prematurely, Price really delivers – his depiction of a fragile man descending into madness is immensely touching and chilling. Price’s theatrical histrionics are inimitable and he is one of only a few actors who can do ‘tortured’ so well: he is mournfully compelling to watch and knowingly grandiose. 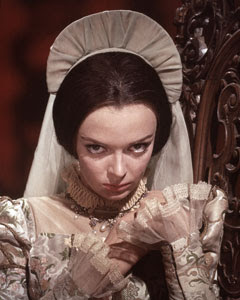 Price is ably supported by a solid cast including Barbara Steele, Luana Anders and John Kerr. Kerr spends much of the film, like many of Corman’s Poe protagonists, stomping around and demanding to know what is going on. Of course, all the while, Vincent Price teases and tantalises and disturbs with fragments of ghastly information he lets slip at intervals. Barbara Steele once again provides a commanding performance and conveys so much with her striking eyes. Indeed, the last shot of the film, while darkly ironic, still wields the power to linger hauntingly. And its just a close up of Steele’s wide eyes.

The set design and lighting are suitably lush and extravagant and Corman’s camera is rarely still. The overwrought mood appears to have been heavily influenced by similar films such as Mario Bava’s Black Sunday and Riccardo Freda’s The Ghost. All the typical gothic trimmings are here in abundance: the looming castle, the secret passageways, the past returning to haunt the present, the outsider protagonist and all manner of sado-sexual undertones.

Indeed, it is not surprising in a film where one of the characters apparently died due to the overwhelming atmosphere of dread and decay, that the film drips with palpable gloom and plays out like a macabre purgatory of undeniable misery and lost hope. And Vincent Price and Barbara Steele!
Adaptation Barbara Steele Edgar Allan Poe Ghost Story Gothic Horror Pit and the Pendulum Revenge Roger Corman Sixties Horror Vincent Price